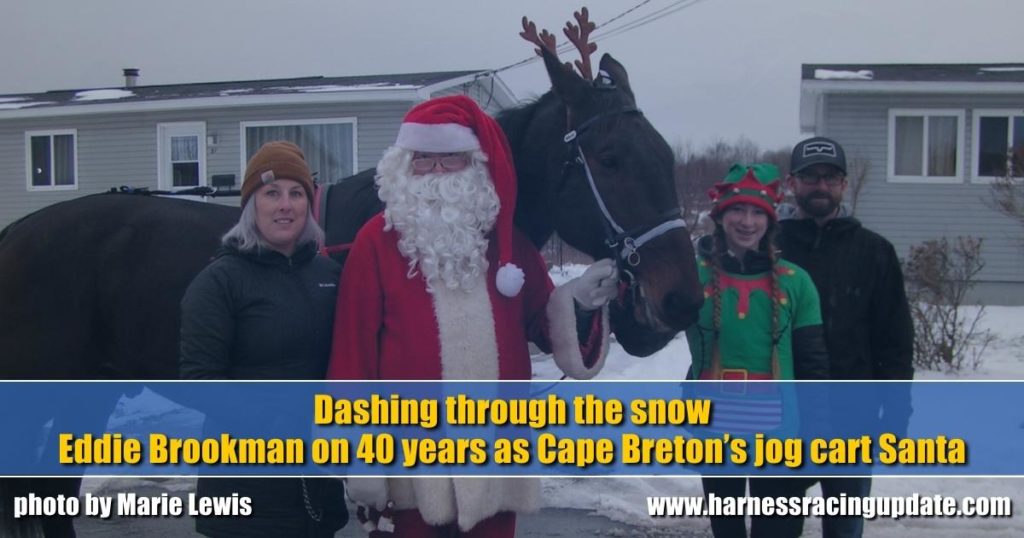 Dashing through the snow

A 40-year driving career came to an end last Saturday in Cape Breton, NS. Eddie Brookman’s final drive wasn’t at a racetrack – Sydney’s Tartan Downs closed in 2006, and he only ever took part in matinee races there, winning three of four “years ago.” No, this race wasn’t against other horses and drivers, although it was against the clock, and maybe time itself. A tradition was ending. Sporting his familiar red-and-white colours, Brookman sat behind pacer Lincoln Seelster and set out from the community of Whitney Pier, ready to hand out Christmas treats and greetings along the main road, one last time.

The 63-year-old horseman makes a perfect Santa Claus. The standardbreds he takes to the street are carefully-chosen, gentlemanly pacers who respond well to attention from the people who visit Santa’s festively-decorated jog cart. For many years, Brookman used his own horses, King Is Crowned (p, 4, 2:00.1h; $39,992) and Township Comet (p, 3, 2:01.4h; $11,688), both acquired at Truro Raceway, co-owned and raced with his friend Paul Whalen. The gelding and the ridgeling both retired at Tartan Downs at age 14, becoming what Brookman called his “pets” for many years afterwards: King Is Crowned passed away last year, at age 36; Township Comet lived to age 34.

“Thirty-nine years ago, I had a plan,” said Brookman, “and the plan I had is that I was going to have a horse and wagon for weddings.”

After seeing Santa Claus on board a fire truck one Christmas, the Whitney Pier owner/trainer/caretaker decided to merge his passions for harness racing and volunteering. With the support of the community sponsors Brookman asked for help with treats, Santa’s jog cart ride was born. One of his first sponsors, Cape Breton Pepsi, still provides 24 cases of pop every year, which Brookman’s helpers distribute to around 400 kids along his route. This, too, takes planning: “Everything has to be in advance, you know what I mean? You just can’t go out and do it.”

For starters, suitable horses for the six-hour trek aren’t easy to find. Ever since he retired the aging King Is Crowned and Township Comet from reindeer duty, friends have loaned Brookman horses such as 2018 mount Dragons Fire, a 7-year-old gelding owned by the Merner family of Port Morien, NS. Brookman said that other than his own team, Dragons Fire (p, 3, 1:56.4h; $32,017) was the best horse he had used for the one-horse open jog cart trip. Sadly, it would just be for one holiday season: “I went to go get him the next year, and he had died. He was a nice horse, too. He was a big, black horse and he was perfect.”

Nothing has stopped Cape Breton’s harness racing Santa. Marie Lewis has followed Brookman’s jog cart for many of his annual trips, providing free photos to people who pose with Eddie and the horses. This year, the event fell on her birthday, which she was happy to spend with Brookman and friends.

“He’s gone out in the rain. Last year, he couldn’t get the horse, so he walked the whole distance in the rain,” she said. “He didn’t want to let the kids down.” There would be no letting the kids down in 2021: “Elf” Colby Lynk and her gelding Lincoln Seelster (p, 4, Q1:57.1f; $29,996 US) accompanied Santa on his last local outing, which is typically a six-hour round trip.

Brookman has loved racing since childhood, when he would skip school to hang out at Tartan Downs and learn from trainer/driver Greg Sparling. He eventually went to Ontario to work for Joe Stutzman, the 2004 O’Brien Trainer of the Year, who now owns First Line Training Centre in Milton.

“I raced at Woodbine and Mohawk with him,” said Brookman. “There used to be a training track behind Mohawk and he’d give me a stopwatch and say, ‘Go 30 minutes.’ Don’t matter if you went a mile, two miles, or five miles. […] Six horses a day, just going around and around,” he said with a laugh, adding that he never wanted to become a pari-mutuel driver, but “did everything else [himself].”

“Down in Chicago with Joe, that’s the furthest I ever went,” he said, also sharing a travel safety tip he got from fellow Cape Bretoner Donnie Rankin: “Jesus, Jesus, watch yourself when you go across that Windsor border! Stay in the truck!” Brookman enjoyed working for Stutzman, but returned home for good when he lost his wife to lung cancer.

His love for the sport continued, uninterrupted. “I have six [horses] over in North Sydney there now, with [trainer] Ardon Mofford,” said Brookman. “I’m over there every day… I owned a lot of standardbred horses and raced everywhere with my own over the years.”

Although Santa’s Cape Breton voyage has come to an end, today (Dec. 19), the jolly old elf returns to Truro Raceway, the only Nova Scotian track currently in action. “I’m taking a horse called Lively Freddie [p, 5, 1:52.2s; $99,878 US], a big chestnut horse,” Brookman said, filled with enthusiasm. “I’m going to lead the post parade every race and I’m going to stop in front of the grandstand at Truro, in the [infield] horseshoe there. If anybody wants to come out and see Santa Claus, they’re welcome. I’ll have candy canes and chips and all that, to give to everybody. Don’t matter who it is. It don’t matter how old you are or how young you are, I give them to everybody.”

He thinks he’s found someone to carry on Cape Breton’s seasonal jog cart tradition, but he will miss it. “There’s so many special times. I cry every time I do this,” said Brookman. While his annual drive was never about seeking praise or attention, in December 2013, the Nova Scotia Legislature officially recognized him and his team for “bringing the true meaning of Christmas to the community of Sydney.”

Some in his hometown suspect that the Santa Claus of Whitney Pier may return. “This is apparently… definitely his last year,” said Kevin Head of Pier Community Funeral Home, a long-time sponsor of Eddie’s drive. Why the ambiguity? Head chuckled and replied, “Because if he’s healthy next year, you never know.”