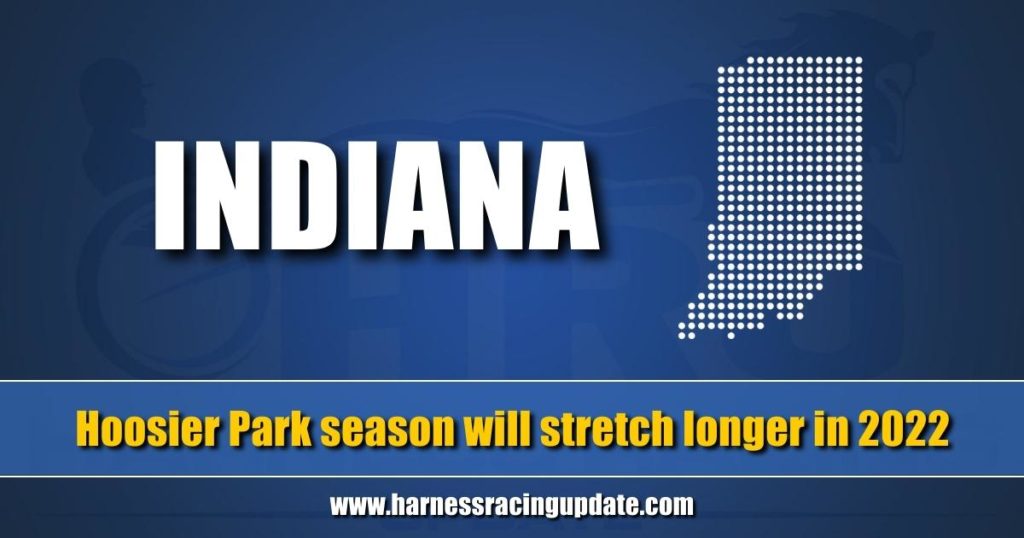 Plus, the 2022 Indiana Standardbred Breed Development program will be valued at nearly $14.3 million.

This season, Harrah’s Hoosier Park conducted harness racing in the month of December for the first time in the track’s history. In 2022, the Anderson facility will race even deeper into the final month on the calendar. In a meeting held Monday (Dec. 6), the Indiana Horse Racing Commission (IHRC) approved Hoosier Park’s annual permit renewal and 160-day racing calendar for 2022. The season will begin Friday, March 25 and carry through Saturday, December 10.

One of the biggest adjustments for the 2022 season is the return to a Tuesday through Saturday schedule. This season, Hoosier Park changed from its traditional race week to a Wednesday through Sunday format. Moore said that horsemen requested the move back to the previous dates, and there was not a significant discrepancy in handle when exchanging Sunday programs for Tuesday.

“Handle-wise it was about a dead-heat; it was about a draw. The good thing about Sundays is we had people on track, so we had a better on-track handle. Having people on track is always important to me,” Moore said. “But we listened to the horsemen and we’re good partners. They said we would rather not race on Sundays and we said, ‘So be it, we won’t do it. We’ll go back to Tuesdays.’”

Hoosier Park will kick off the 2022 campaign with a two-day opening weekend (March 25 and 26). From there, the track will apply a tiered approach, adding Thursday in the second week (March 31-April 2) before moving to a four-day format in the months of April and May. Beginning in June, Hoosier Park will race the Tuesday – Saturday schedule through September before scaling back to four days per week in October and three each week in November and December. Six dates will be offered in December (1, 2, 3, 8, 9, 10), extending the calendar one week longer than in 2021 to close out the meet. Hoosier Park will offer racing on the Memorial Day, July 4th and Labor Day holidays.

Moore said the calendar works well as it allows the track to continue to card 14 races each night while tapping into the freshman racing calendar. The race weeks are expanded as 2-year-olds begin their campaigns, and contraction occurs as the young racers are turned out for the season.

“It has worked out perfectly. When we stair-stepped up to five days a week, if you look around the country, there are very few tracks, whether it be thoroughbred or standardbred, that race five days a week. We’re able to do that because the bulk of our schedule involves 2-year-olds. It gives us that extra reinforcement of horses,” he said.

During the same meeting, commissioners approved the 2022 Indiana Standardbred Breed Development program valued at nearly $14.3 million. The structure of the program is nearly identical to the 2021 offering with some minor modifications.

The budget for the Indiana Sires Stakes program remains unchanged, offering total purses of $7.9 million. The program will feature six legs for 2-year-olds and eight legs for 3-year-olds, culminating with $250,000 Super Finals for each division. Horses finishing sixth through 10th in the Super Finals will each receive $4,000. All 2- and 3-year-old categories will offer $25,000 consolations. Older horses will compete in $50,000 finals.

According to Jessica Barnes, director of racing and breed development at the IHRC, $1.4 million was budgeted for the 2021 Indiana Sires Fair Circuit. However, just over $1.2 million was spent due to a decrease in the number of divisions. As a result, the Standardbred Breed Development Advisory Committee voted to keep the 2022 program at $1.4 million and bump purses for each race from $3,000 to $3,500.

The line items for Indiana Sired late closers and IN Sired Overnight Supplements/Mini Series also underwent adjustment. For 2021, a total of $250,000 was allocated for Indiana Sired late closers, but Barnes said $398,100 was spent due to increased participation. In 2022, $400,000 is available for this area of the program. Overnight supplements were first set at $2 million last year before the program was amended and an additional $1.7 million was approved in July. The 2022 budget for supplements and mini series is set at $3.5 million.