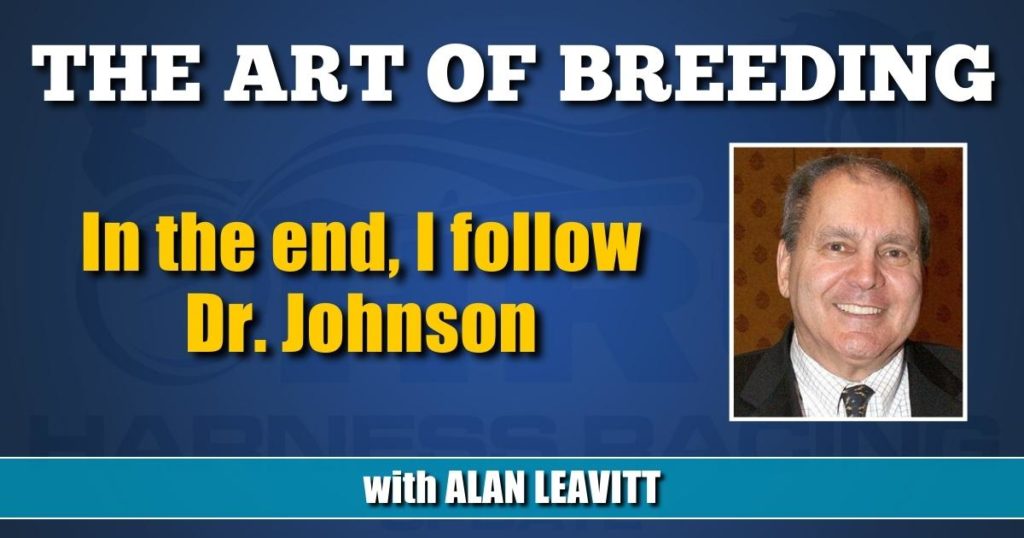 First, an old friend from New Jersey, Phil Sporn, pointed out an egregious oversight in my piece about Earl Teater and Bret’s Romance. Apart from being a foundational mare, in her own right she produced B.G.’s Bunny.

Before he broke a bone in the process of winning an elimination of the Meadowlands Pace, B.G.’s Bunny was a top stakes colt. He then went on to be a successful sire, and his name still appears from time to time in the pedigrees of stakes winning pacers.

As a footnote, B.G.’s Bunny’s name was a grand celebration of the name of his owner, Bob Greenberg aka Bunny Greenberg. So B.G. for Bob Greenberg, and Bunny for Bunny. By day, Greenberg operated a fleet of school buses, if memory serves, but he also was a powerful figure in New Jersey politics.

I got a snapshot view of that through my friend and frequent partner, Phil Tully. Phil had started his own sales company, and he desperately wanted to hold sales at The Meadowlands, then owned and operated by the state of New Jersey.

He was getting nowhere until he happened to mention his plight to Bunny Greenberg. Nobody rides free, as we all know, so in exchange for a piece of the action, namely an interest in Phil’s sales company, Greenberg arranged a meeting for Phil with the main man at the track complex.

By the time they had finished their first cup of coffee, Phil had gotten the exclusive right to hold horse sales at The Meadowlands. His sales there prospered, and Greenberg silently collected his piece of the proceeds after every one of them, and then went merrily on his way.

I’ve recently heard from an interesting young man, Enos Garber, who by the age of 29 has collected a small group of enticing pacing mares. Enos is a one man band, doing everything himself including all the aspects of equine reproduction. There are not many civilians who can claim that kind of expertise, but clearly Enos is one of that select few.

He wanted my opinion about breeding two of his mares, Terror At Night and Art Frenzy, to Always B Miki.

Terror At Night is by Western Terror, and out of Enhance The Night, by Western Ideal.

Art Frenzy is by Art Major, and out of Lislea Sophia, by Lislea.

Back to Enos Garber’s mares, Art Frenzy to Always B Miki would produce a foal inbred to Artsplace, plus being linebred to Abercrombie and Big Towner. As far as this kid’s breeding philosophy goes, that kind of close breeding is ideal. Two hits of blood from an outstanding horse is the way to produce an outstanding horse.

As a lifelong yearling seller, I also think that a good looking colt or filly with this kind of close, but not too close, pedigree, would have an enhanced value in the sales ring.

Enos also told me the story of how he acquired a third mare, Thrillonthebeach. She’s by Somebeachsomewhere, and out of Tutu Hanover, by Western Ideal. She was offered for sale on OnGait, the province of Maurice Chodash, who is the living proof that a man can be very good at what he does and still be a great guy.

Thrillonthebeach was put up with a starting price of $80,000. There were no takers, so Enos contacted her owner to get the scoops. The guy said the $80,000 was actually his reserve, but it was clear that was now irrelevant, since there were no bids at any level.

Thereupon some traditional horse trading ensued and when it was over, Garber owned the mare, but for a price well below $80,000. What makes the story interesting is that Thrillonthebeach is a half sister to Lyons Sentinel p, 4, 1:48, with $2,003,594 in earnings, and counting.

Parenthetically, I’ve recently been flattered to learn that I have a regular reader in Carter Duer. Duer is one of the top horsemen who learned his trade early on at Castleton Farm. The line started with Francis McKinzie, whom Francis Dodge Johnson Van Lennep hired as her first farm manager when she bought Castleton. McKinzie had been a farming neighbor of Sep Palin in Indiana, and Palin was Francis Dodge’s longtime standardbred trainer.

Sep Palin also had written his name indelibly into the record books of our sport when he bought a grey, yearling gelding at the Indianapolis yearling sale for $900 in 1933. That was Greyhound, the greatest trotter who ever lived, and he was driven to all of his victories and world records by Sep Palin.

In any case, McKinzie went on to manage both Walnut Hall Stud and Almahurst Farm after his stint at Castleton. His place there was taken by Bill Brown, a great horseman and a great guy. Today, this tradition is carried on by his daughter, Jean Brown, who manages Blue Chip Farm. I’ve known Jeanie since she was in the fourth grade, and she’s a delightful person.

While Francis McKinzie was running Almahurst Farm, His understudy there was Albert Adams. He’s also a top horseman, and well respected by everyone fortunate enough to know him.

Duer also learned his early trade at Castleton, and for years now he has successfully operated his own farm, Peninsula. I believe the name derives from Duer’s childhood on the Eastern Shore of Virginia. There is no better horseman in our business today than Carter Duer, and he also has a great, dry sense of humor that I could listen to for hours.

Finally, I noticed recently that Standardbred Canada was offering a contest featuring a number of millionaire race mares, and asking contestants to pick the one they’d most want the first foal from.

This, again, is the classic confusion about the total and absolute differences between a mare’s phenotype, or visible, physical self, and her genotype, which is her genetic makeup. Again, and again, and again, the fact that a mare can win a million dollars on the racetrack tells us nothing about her ability to reproduce big-money winners.

But even more finally, let me quote Dr. Samuel Johnson, who in 1757 said these words which I try to follow: “The only end of writing is to enable the readers better to enjoy life, or better to endure it.”