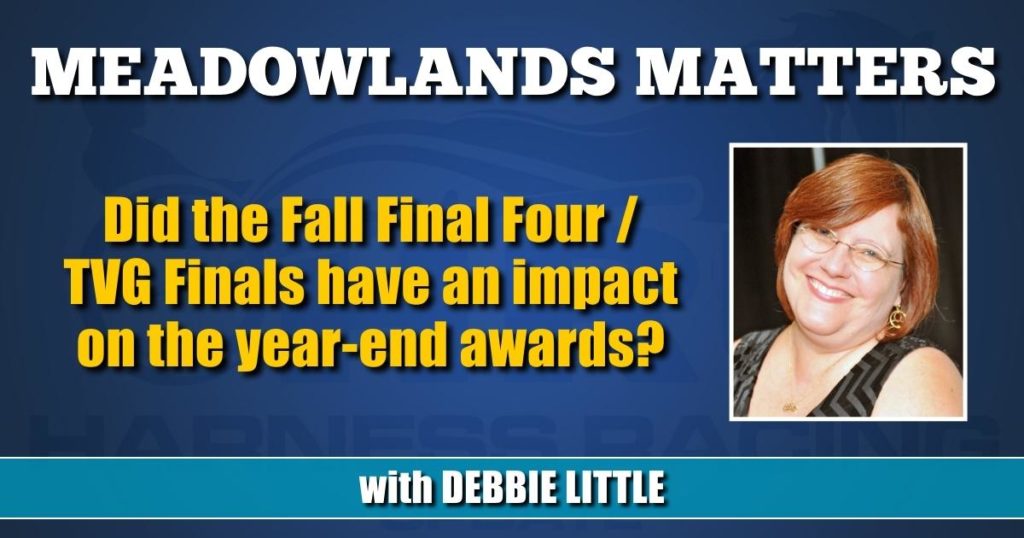 Did last night’s Fall Final Four / TVG Finals at The Meadowlands have an impact on the year-end awards?

Fall Final Four / TVG Finals Night from The Meadowlands is in the books for 2021.

Did those races change the viewers’ votes for Dan Patch divisional honors?

In my opinion: Maybe.

I do believe the choice in at least some of the divisions contested were decided before a hoof even touched the track Saturday (Nov. 20).

I shouldn’t have to say more, but I will by asking the question: What more does she need to do?

She has nine wins in 10 starts and is only three-quarters of a length away from perfection.

If her win in the $359,450 Three Diamonds doesn’t put her in the conversation for Horse of the Year, what would?

For the people who say they don’t think a 2-year-old should be named Horse of the Year, I’d really like to know why.

Congratulations to the connections of Early Action for winning the Governor’s Cup. It was a tough field and an impressive victory.

Despite the fact that Fast As The Wind won the $413,600 Valley Victory in a stakes-equaling 1:53.2, I don’t believe he has not done enough this season to challenge King Of The North in the 2-year-old trotting colt division.

Even though he hasn’t shown his best at the end of the year, King Of The North should wear that divisional crown.

It was nice to see Lyons Sentinel back to her winning ways in the TVG Mares Pace Final, which should lock up divisional honors for her.

Had Breeders Crown champ Rocknificent won, it certainly could have started a discussion.

Congratulations to the connections of both top-notch mares and I hope we get to see them slug it out again next year.

Allywag Hanover won the $350,000 TVG Open Pace and I believe will triumph over Ocean Rock for divisional honors.

The two older pacers have gone head-to-head three times this season with the 2-1 advantage going to Allywag Hanover.

Going into the $479,450 Goldsmith Maid, I believed that Venerable was a lock to be the 2-year-old trotting filly champ. But this is why we race them, because when Breeders Crown champ Joviality S came out on top in a stakes record time of 1:52.1 more research was required.

The two fillies have faced off only twice this season with each one getting a victory. Venerable has more money and only two losses on her card this year compared to three for Joviality S.

It’s not a lock anymore, but I still give the edge to Venerable.

For a few years the trotting mares division has been a two-horse fight between Atlanta and Manchego.

Is two wins enough to secure you a divisional honor? Maybe.

There is no doubt that Ecurie D DK was impressive winning the Allerage and Breeders Crown and if he had raced in the $350,000 TVG Open Trot, and done well even if he hadn’t won, I probably would have voted for him.

But Forbidden Trade has been knocking heads with the best all season and has now hit the board nine time in 14 starts. In addition to the aforementioned TVG, he also won the $210,000 Caesars Trotting Classic and the $135,000 Crawford Farms.

I think it’s too close to call.