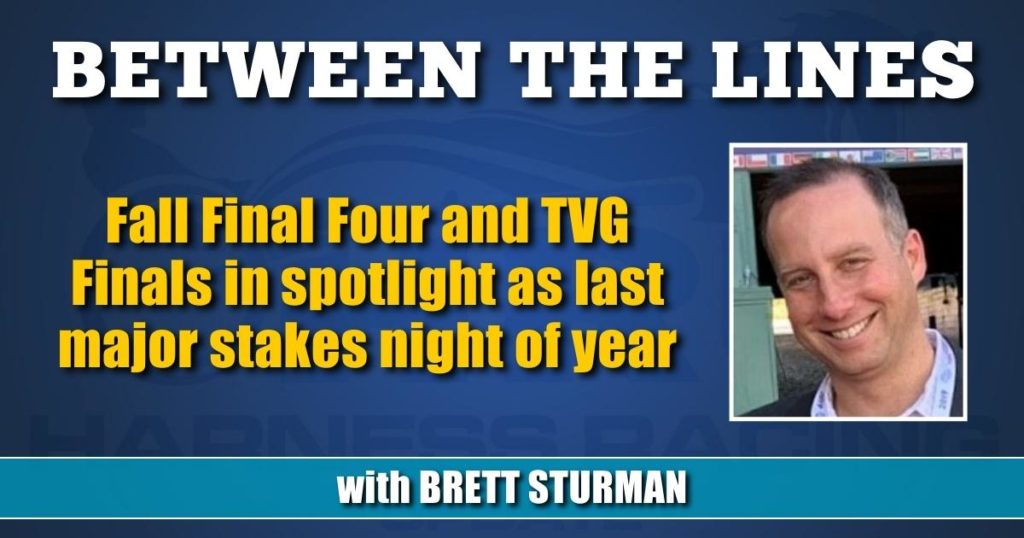 With something still left to play for in some divisions, here is how I see the big races shaping up on Saturday at The Meadowlands.

FAST AS THE WIND has improved notably in recent weeks for Alagna and Dunn and looks like the one to beat in this compact but competitive final for 2-year-old colt trotters. His second-place finish in the Breeders Crown final three back was amazing considering the impossible trip, and he since followed that up with a well-earned sweep in the recent Kindergarten races, including last week with the big money on the line. COACH K HANOVER had every chance two back to get to #1 and couldn’t, last week that same rival was able to pass him late up the inside. PRETENDER loomed last out when he was impeded by #4 in the stretch and broke in an incident that I don’t think connections were so happy about; intriguing play provided he offers similar odds as last week. SLAY closed well from last up the inside to pass all but one in the Matron at Dover. THREEPOINTBLUECHIP was the winner of that Matron race in springing the mild upset on the front end and it came on the barn change from McGinnis to King.

GIA’S SURREAL has gone a couple of big miles here earlier in the season and now returns off back-to-back wins in the preferred at Woodbine Mohawk. This has been a career year for driver James MacDonald, and he retains the drive; upset call. ROCKNIFICENT is going to end up being favored for the first time this year over LYONS SENTINEL, and rightfully so. Breeders Crown winner and has won three in a row and it seemed unthinkable a month ago, but if she were to end the year with a win in this race, she would get support for divisional honors. LYONS SENTINEL was so good for so long this year but hasn’t been at her best in recent starts; had no excuse in last at Dover when she pounced on a hot pace but was caught by others. PEAKY SNEAKY has definitely been better in the fall but I still think it’s a tough task in asking her to win this race; bound to be up close throughout from the rail. WATCH ME NOW N had the length of the stretch to get to Peaky Sneaky last out and couldn’t; isn’t done any favors from the post draw. Still waiting for signs of life to return for KEEP ROCKIN A.

MISSWALNER FASHION has won her last three Meadowlands races by over 12 lengths and might be the “now” horse. She didn’t let Breeders Crown elimination winner Lilbitalexis even get close last week en route to a career best win; might be good enough to beat the more accomplished fillies. VENERABLE is a miscue away from potentially looking at Horse of Year honors but rebounded nicely at Dover last out in the Matron in a field she couldn’t lose to. Obviously deserves heavy favoritism but I think she can be beat. JOVIALITY S has been going strong since the summer and that was a typical big money driver that Sears delivered in the Breeders Crown to reach against Raised By Lindy in a difficult trip in the slop from post 10. JIGGY JOG S was cooked in that opening panel in the Breeders Crown and has been battle tested. PALERMO HANOVER has surprised on multiple occasions this year; takes back and rallies.

A Breeders Crown win remained elusive for ATLANTA and that’s too bad. She did what she could in that race when racing first-over off a :57.2 walk to the half, but the leader held strong. It’s back to the rail now off a good qualifier and will win if on her game. A ton of credit to FELICITYSHAGWELL S in that Crown upset, and I don’t think it was a fluke. She was loaded with trot in her elimination behind Atlanta the week prior and another aggressive steer will be coming; can repeat. I love when the 3-year-old’s give it a try against older, and such is the case with BELLA BELLINI. She took the Crown two back when Altar broke in the stretch and that would have been a great matchup to see otherwise. She crushed last out in the Matron at Dover but would need to be a super filly to win from post 10 against the likes of these. WHEN DOVESCRY had no shot in the Crown and has raced off the pace in her last pair; I think Miller has to push her early here in a race she certainly figures in. RAMONA HILL took action in her last race and is another that was a victim of the pace; remains winless in 6 starts this year.

HAMMERING HANK has been awesome in his last pair and has been extremely well regarded going back to the Breeders Crown when he was bet down to 3-5 favoritism in his elimination over eventual elimination and final winner, Monte Miki. He won as pleased against many of these last week in the Kindergarten final; a talented colt. LOUKES PERRY showed speed in his Crown elimination and was shuffled; looks like there could be real potential here. MARKET BASED proved better than FOUREVER BOY in that four-horse Matron field last out; I was surprised the latter was favored in that race. EARLY ACTION was no match for #4 for last week but still figures for a share despite that and the outside post; always is in the mix. MAC’S MARVEL has outraced his odds in his last pair; heading in the right direction for Harder.

The complexion of this race has changed somewhat by both Breeders Crown winners Ecurie D Dk and Jujubee opting to rest, following their respective frenetic schedules. FORBIDDEN TRADE was hard used when brushing to the front past Ecurie D Dk in the Breeders Crown and then took immediate pressure; slated to pick up Dube for live connections. BACK OF THE NECK is deceptively good and should have never been 62-1 in the Breeders Crown; the winner of the Dayton Derby can win this. This is arguably a class drop for AMIGO VOLO; doesn’t seem much worse than anyone else. BEADS would have beaten these earlier in the year but he was overrun last week by Dunbar Hall and didn’t hold second by much either; I guess I’d be surprised. CHIN CHIN HALL is an interesting player from the rail; excelled here in September against comparable. READY FOR MONI can land a share.

Picks: Forbidden Trade, Back of the Neck, Chin Chin Hall

NIKI HILL looks to put an exclamation point on her season and a win in the Three Diamonds would push her 2-year-old earnings north of $900,000. They were never going to get to her last week and she’ll be in a position to control the race however Dunn wants. TREACHEROUS DRAGON took another crack at Niki Hill in the Kindergarten final but was no match late; I think connections would probably be happy running second to that rival again coming out of post 10. SMUGGLE TINA took aim two back against DON’T FENCE ME IN; the latter showed speed last out before tiring in the stretch. ALWAYS GONNA B YOU makes her second start for Holloway and brushed on debut here before tiring; could set her up for more now. JOYRIDE HANOVER has only missed the board once in 10 starts; playable at what should be a big price.

Though probably to a smaller extent, there exist similarities between OCEAN ROCK and ALLYWAG HANOVER in the TVG Open Pace as there are to Rocknificent and Lyon’s Sentinel in the Mares Pace from race 5, above. The division still likely belongs to Allywag Hanover, but another Ocean Rock win to go along with his recent Breeders Crown triumph over that rival could make things interesting. Save for the Allerage where Ocean Rock was parked to the half in :51.3, he hasn’t lost since August 28. He was totally overlooked in the Breeders Crown and shouldn’t have been; will get more respect now. There was no disgrace in Allywag Hanover getting beat in the Breeders Crown, but he wasn’t as strong last out in the Potomac Pace at Rosecroft when he was never going to get to the winner and was just able to hang on for second. ENAVANT was sneaky good in his Breeders Crown elimination and then most recently won the Potomac Pace with total authority. CATTLEWASH was getting there late in the Breeders Crown and just missed; always playable if the price is there. CATCH THE FIRE steps back up; his best has shown that it would be good enough.