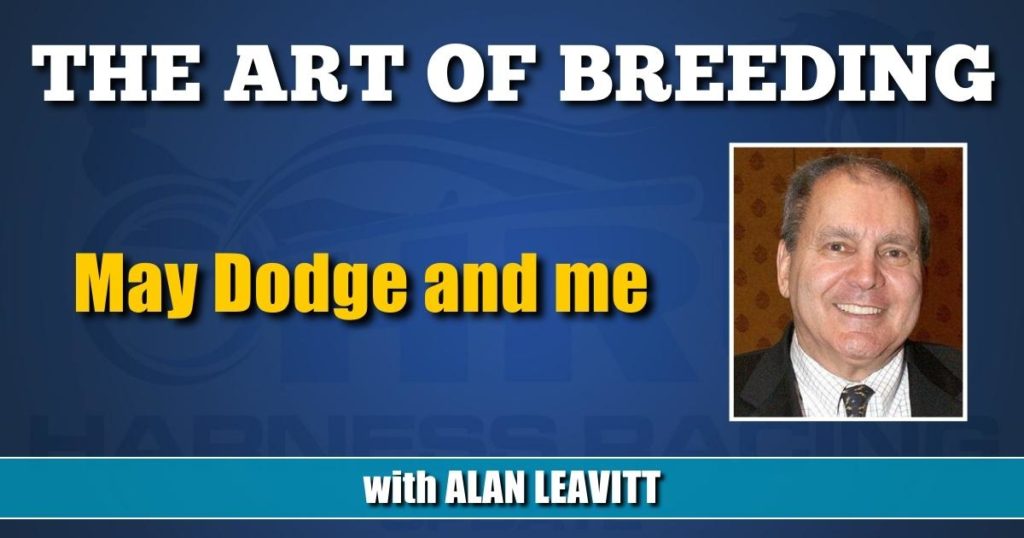 May Dodge and me

It’s not that I think our sport is perfect when I come up with problems in the thoroughbred world. Of course we have plenty of things that cry out for correction, including drugging, ridiculously low fines for whipping, (New Jersey not included, they do it right), post time drags at all our major tracks, etc., etc., and so forth, in the words of Yul Brynner as the King of Siam.

It’s just that the thoroughbred King Tuts are so self righteous and act so superior. In the time this kid has lived in Kentucky, I’ve yet to meet someone from the running horse world who didn’t look down on us standardbred folks as a lower form of animal life.

So what happened last Saturday at the Breeders’ Cup, which owes its origin to a refugee from the standardbred world, John Gaines, was insightful. In one of their biggest races of the whole series, the one for 3-year-old colts, the favorite threw himself down in the gate and got stuck there.

At that point, someone with a working IQ wisely opened the gate of the colt in the next stall so he wouldn’t get tangled up with the colt stuck under the gate. That colt in the neighboring stall had been standing quiet as a lamb. When the gate opened in front of him, he and his jockey quietly walked out of the gate and around to the back of the gate, so he could be reloaded.

It was then that a lame brain vet, one of the Breeders’ Cup officials, declared the well mannered colt a vet’s scratch, although the colt hadn’t done a thing wrong. So betting was stopped on the scratched colt. Then a wiser head, not a terribly competitive field, reinstated the colt and allowed him to compete for the purse, albeit removed from the betting.

Here, justice finally prevailed, and the reinstated colt won the race, and the big purse. But one has the right to wonder, how does such a man made screw-up happen on one of thoroughbred racing’s biggest days?

On a different note, there’s lately been some attention given to the foundation mare May Dodge. Her blood continues to run in some of today’s top horses, including Captaintreacherous, and it will continue to be sought after for years to come.

My own experience with one of her descendants involved someone who played a key role in the success of Billy Haughton, a legend today but a close friend in earlier days.

John Froehlich was essentially a truck farmer on Long Island, a man sans a higher education who nevertheless was smart enough to buy up hundreds of acres of land where he raised his crops. In time that land became priceless and it made John Froehlich a rich man.

As the money came rolling in, Froehlich discovered harness racing and Billy Haughton. That had as much to do with geography as anything else, since Haughton and his family happened to live quite close to Froehlich’s home farm.

Like many of us, Froehlich was totally captivated by Haughton, who had a personality that simply glowed. As a personal digression, in 1958 I went to a wedding reception in Palm Beach, and John F. Kennedy was also there. Screwing up my courage, I introduced myself on the basis of both of us having gone to the same college, and we shook hands.

All these years later I still remember how there was a kind of glow around Kennedy, which I guess is best defined as charisma. Billy Haughton didn’t have as strong a presence as JFK, but he came about as close as ordinary mortals could.

John Froehlich was the owner who put up the big money whenever Haughton needed it. As a quick example, when Romulus Hanover was selling at what looked to Haughton like a bargain price, he threw in a $35,000 bid without a second thought, knowing that John Froehlich would cover it. That may seem like peanuts today, but to get a perspective, you probably should multiply the dollars of those days by 20 to get today’s value.

One of Haughton’s other good owners was a lady named Margaret Lloyds, whose husband was Lloyd Lloyds, believe it or not. She didn’t have the buying power of Froehlich, and so she would ferret out bargains. Before one of the Harrisburg sales, she and Froehlich were both interested in the same yearling.

They talked it over, and then Froehlich resolved it by telling Margaret;

“You bid on the colt as far as you want to go, and if you get him, that’s great. But if you’ve hit your limit and the bidding is still going, I’ll start bidding when you’re finished.”

The kindness there speaks for itself. Which brings me to my encounter with John Froehlich and May Dodge.

My kids were quite small in those days, and on Sundays I’d frequently bring them over to Froehlich’s home place, which was a little bit like a magic kingdom, with goats, sheep, dogs, and chickens the kids could play with.

On one of those visits, Froehlich told me he had a mare he wanted to sell, Romantic Hanover. She was by Tar Heel, and out of Romola Hal, who was actually a granddaughter of May Dodge. I immediately lusted for her.

I don’t remember if Froehlich actually set a price, but I knew whatever it was, I couldn’t afford it. In one of those quirks of fate, earlier that year I had bought a yearling colt on the advice of my friend, Phil Tully, who told me that he owned the colt’s 2-year-old full brother, who he said was going to set a world’s record for 2-year-old trotting geldings at Lexington.

I bought the colt, despite the fact that he stood a little off in one front foot, and sure enough, he soon had a world’s champion brother.

Back to Romantic Hanover, Froehlich told me that she was open after being bred at Walnut Hall Farm to Duane Hanover, a free-for-aller that Haughton had raced with good success for Froehlich.

Actually, as it happened, Romantic Hanover had failed to catch after several tries during the breeding season, and everyone just assumed that was the case after her last cover, right before she was shipped home.

Froehlich and I did some real horse trading, and I finally bought Romantic Hanover, as a barren mare, for my yearling full brother to the new world champion 2-year-old trotting gelding and $5,000 hard earned dollars.

So the yearling was shipped off to Haughton’s winter training quarters in Pompano, and Romantic Hanover was shipped to Lana Lobell Farms. Where she was preg checked as a matter of routine, and of course she was in foal to Duane Hanover.

The mare had already been transferred to my name, and the yearling to Froehlich’s. Fait Accompli, as they would say in France. I immediately went back to Froehlich, and told him that he would own 50 per cent of the foal Romantic was carrying. It turned out to be a colt, which Froehlich bought out of our yearling consignment the one year we sold at Tattersalls in Lexington.

The colt turned out to be a nice racehorse for Froehlich, and Romantic Hanover was an okay broodmare, but nothing great.

But when I was in Lexington with that colt and the rest of our consignment, I also met the prettiest girl I had ever seen.

And, to make a long story short, we’ve now been married for just short of 30 years. And maybe, just maybe, John Froehlich and Romantic Hanover had a little to do with it.