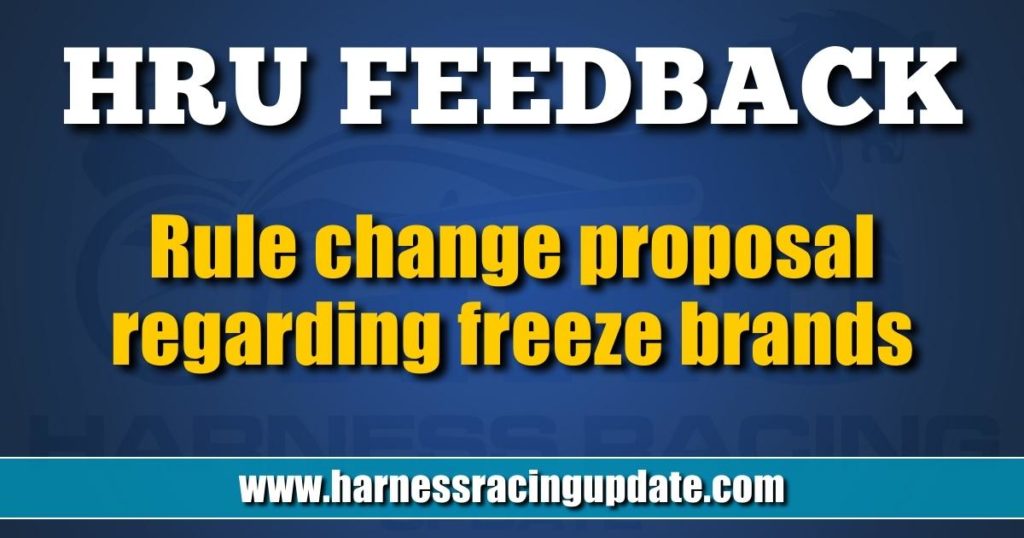 I would like to address a few rule change proposals that will be considered at the United States Trotting Association’s annual meeting in March, 2022. I am a co-sponsor of a rule change proposal that continues, with slight modification, an existing USTA rule, 7.06, that requires a visible form of ID and a chip. Over several decades, the USTA has invested substantial money and staff resources to elevate the profile of Standardbreds in the pleasure horse world. During that same time frame, Standardbreds have had the benefits of a visible ID. Freeze brands have contributed greatly to the success of rescue groups that have pulled thousands of our horses out of kill pens, want ads, and auctions. These horses have been rehabbed, adopted and returned to the useful athletic life for which they were bred. With their added years of life, they contribute to the agricultural economy and promote our brand.

The growing numbers of off the track Standardbreds show their new connections have a love and admiration that extends outside of racing and service in the Amish community. There is no greater proof of this than the members of the Facebook group, “Standardbred Retraining Group”, where post after post of the 10,000 members showcase the amazing attributes of Standardbreds. They have a well-earned reputation that has created a demand for them.

We know, without a shred of doubt, that a chip reader will never replace a brand in a crowded kill pen. Why would we purposely deny them the opportunity to be saved from the callousness of the Racing-Amish-Auction-Slaughter pipeline? It is obviously the humane option to continue freeze branding, as further supported by the recommendation of the Senior Advisor of Equine Protection of the Humane Society of the United States.

How did we get to this mandate for microchip only? The current rule in the USTA rule book 7.06 states – “No horse that has not been tattooed or freeze branded and implanted with a microchip as authorized by the USTA will be permitted to start at an extended pari-mutuel meeting unless the permission of the presiding judge is obtained…” At district meetings, when it has been pointed out that the current rule is not being followed, the answer has been that it is read wrong, or that was not the intent, to it was introduced and passed in 2010, but didn’t make its way into the rule book, to now it is simply a typo. I, and others, cannot find any explicit rule proposal that speaks to phasing out freeze-branding and moving to chips as the required USTA ID. Rather, in the 2018 April issue of Hoof Beats a brief article announces “The USTA registration committee approved a proposal that will require all Standardbreds, starting with foals born in 2019, to be implanted with a microchip”.

There is no mention of phasing out brands and making them possible with a 50 per cent registration surcharge. This deserves a rule proposal stating the intention to move to chip only, where it would have gone through due process, with membership having an opportunity to weigh in, instead of now referring to adding the approval of chips in 2010, as an equal option, being the reason given for the mandate. Membership at large needs to be involved and informed. Why would we not want to give our horses a visible ID, which offers them a layer of protection throughout their whole lives and gives them the best opportunity to survive and thrive? Many individuals and groups are trying to get ahead of the dealers and  this makes their work unnecessarily difficult. A freeze brand and a chip together are a win-win for our industry and our horses. Members, please consider a yes on rule change proposals 4, 18, 20, and 21 and let your directors know.