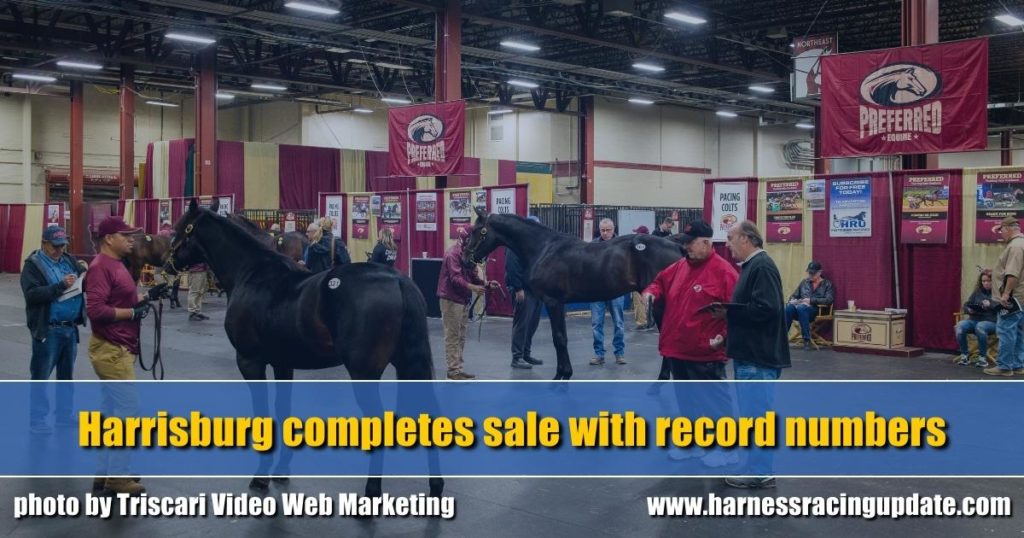 The Standardbred Horse Sales Company’s auction concluded Friday with a new record for average ($53,527) and the second highest gross in history ($69,477,500).

Many figures out of Standardbred Horse Sale Company (SHSC) 2021 sale set records, among them the pace; Friday’s (Nov. 12) session had 215 horses go through the ring starting at 10 a.m. with all horses sold and clean up starting just before 3 p.m.

“Our auctioneers said it was one of the easiest weeks they’ve ever had,” said Dale Welk, president and director of operations for SHSC. “All week, bidders came ready to bid and they bid. They didn’t hesitate. Usually someone will try to cut the bid a little bit and they didn’t even try to do that. They just kept right on bidding.”

“Right up to the end, the arena was packed,” Welk said. “Right up to the last horse. [We] sold a horse for $140,000 in the supplement – it’s just great. It was just unbelievable, borderline saying it was crazy. I mean, you didn’t know how to predict anything this week. It’s great. I couldn’t feel better about it. It’s not just me, there’s a lot of work goes into this – beforehand getting entries, everything. The consignors brought us a great group of horses.”

“I just had a few people in the office recently that said they didn’t get a horse and they’ve got money,” Welk said as the flags hanging around the sales arena came flying down and the chairs were mostly packed. “A lot of these guys will set a limit and that’s where it is. I’ve got to appreciate that, that they can stop, but there’s a lot of others that didn’t stop. Some of the higher-priced horses, people said, ‘I was going to stop $100,000 before that’ but, you know, if it’s worth $400,000 then it’s worth $450,000.”

A turn for Key operation

Bob Key, a prominent and engaged horse owner, died early in 2021 at 88 years old. His widow, Patty Key, assumed control of the farm and of the Winning Key LLC operation.

When Key was alive, he had a love for racing and dabbled in breeding. He notably bred American Winner, who won the 1993 Hambletonian, and had since bred and raced most of his own horses. And while Winning Key, after Bob’s passing, has continued to race much of the farm’s stock, Patty has begun to transition the outfit by selling some of its racehorses and yearlings and focusing specifically on mares.

Shaun Laungani, the stallion booker for Diamond Creek Farm, has handled part of the search for Winning Key 2.0. Through the Mixed Sale, Laungani signed for over $1 million worth of stock ranging from stallion shares to race mares. On Friday, he paid the third-highest amount on the day when winning auction on Hip 1449, a Bar Hopping filly named My Abigail, for $370,000. Laungani also purchased the Muscle Hill filly Avenir (Hip 1397) for $230,000 and the Chapter Seven filly Sweeping Rainbow (Hip 1407) for $180,000. Along with shares they bought for Chapter Seven and Muscle Hill, as well as a mare in foal to Father Patrick named Munster, Laungani has curated the next phase in Patty’s plan to evolve Winning Key from a homebred operation to a fixture selling Day-1 yearlings.

“So, it’s a complete shift,” Laungani said. “Bob hadn’t sold yearlings in decades and now they are starting to disperse some of the stock in the yearling sales, but that stock now is being churned and cycled back in with new, fresh stock coming in. They would like to get to the point where they are a boutique, blue hen, premier breeding operation. Much smaller numbers, I don’t know for sure, but somewhere in the 25-50 mare range. They want to sell yearlings in Lexington and Harrisburg. I’m honored to be a trusted advisor at this point and so Diamond Creek is here to help them with whatever they need.

“There’s an amazing history there, whether it’s American Winner or BJs Pleasure, Break The Bank K… a lot of bright spots over the years,” Laungani also said. “There are some nice breeding pieces still left, but there’s a lot of retooling that needs to take place that’s already been in the works over the last year. The public can expect champions to start coming off of Winning Key Farm again.”

Greg Luther famously dove headfirst into horse ownership with his million-dollar experiment, which started last year. Today, Luther has spent an additional $6 million in his ownership venture – Black Magic Racing – and has added to it.

For one, Luther gets to keep one of his stable stars. He was on record back in August that Katie’s Lucky Day, his filly who bested divisional star Bella Bellini by a nose to win the $351,000 Kentucky Filly Futurity, would go as entered in the Mixed Sale. Early in the week, it was announced she was out.

“She had a little injury [Luther later said it was respiratory related] about 10 days ago after her last race and we felt it was best not to haul her during her recovery time,” Luther said. “Unfortunately, we had to take her out. As high as [the mares] are selling today, I really wish we could’ve sold her, but we wanted to do the right thing by the horse, for sure. Obviously, if she does come back from the injury… the vet says it’s probably a 50/50 shot, but if she does come back, we’ll race her. If not, we’ll just have to breed her next year, so we’ll know by then.”

Luther also bought many others through the sale and paid one of the loftiest prices for active racehorses when he acquired Sandbetweenmytoes, the 2020 Breeders Crown 3-year-old colt pacer champ, for $305,000.

“He raced against three of my Grand Circuit horses this year, so we had Catch The Fire, Captain Kirk and Chief Mate and he raced against them all year long,” Luther said. “My main man, Scotty Zeron, drove him last year so he knows the horse. He says, ‘You know you’re going to have to overpay for the horse today because that’s what they are all doing, but I think it’ll work out for you.’ So, I figured we’d give it a shot.

“As long as he comes back good and comes back strong, I think he’ll be a good 5-year-old. He’s very well-bred, gorgeous horse – unbelievable look – so hopefully he’s just as fast as he is good looking.”

This year, Luther said he has bought 30 yearlings to up his arsenal coming into 2022, bringing the total head under his ownership to 75.

“I own 74-and-a-half of them,” Luther said. “I only have one partner on one horse – everything else I own myself. It should be a very fun year next year. We’re going to Spring Garden Ranch in Florida with the babies this year, so hopefully they’ll get an easy winter for themselves and come back as champions.”

Leaders from the day

Kentucky Championship winner Empressive Hill brought the second-richest tag of the session when auctioning for $410,000 to Jean-Pierre Barjon, who plans to send the Muscle Hill mare to Hunterton Farms to begin her career as a broodmare. Another high-priced mare in transit to Hunterton is the Cantab Hall filly Evening Stroll, who was purchased for $310,000 by Mario Zuanetti for M. Biassuzi Stable. Zuanetti said he does not know if the owner plans to bring the mare back to the track, but knows that he, one, paid a high price and, two, that she will be bred at some point.

“We overpaid, just like everybody else,” Zuanetti said. “Obviously, we have to raise the bar. I saw fillies or mares going for twice as much as I thought. At that point, $200,000 became $310,000. That basically sums it all up. [We could breed to] Muscle Hill or Walner, but Walner is going to be tough… [he’s] just about impossible to get breedings from. She’ll cross good with everything.”

“It’s a good solid market,” Dave Reid said, reflecting on the Friday session. “Listen, I don’t get impressed that easily. I’ve been doing this a long time. Really, it just reinforces what our pre-sale comments were, meaning that the fillies have been selling well the last few years and Lexington was strong and it was strong here.”

“I would make a note, also, that I noticed at this sale, a factor that was probably underappreciated was the borders opening up,” Reid also said. “There were a lot of Canadians here and, more importantly, a lot of Europeans – from Holland, from Italy, from Sweden. With the border opening up earlier this week, people definitely couldn’t wait to get here. The crowd was great, the bidding was spirited and I think that’s a strong factor to the week’s success as well. They do have the internet, but there’s nothing like being live at an auction.”

“I just can’t thank our customers – the people that trust us to sell their horses for them – enough,” Reid said. “We had the Warrawee dispersal and of course that’s a little bittersweet because Mike Wilson is a class guy that runs a class operation. It’s a small nursery in Canada, but I actually treasure those small nurseries because I think they are the backbone of the business.

“The buyers that came here, you’ve got to give them credit for doing their homework. We tried to provide them with as much information as possible, pre-sale, especially with a mixed sale like this. Overall, it was a great week. It’s been a long fall and onto a new venture, maybe, who knows. We’ll see what happens. We’re always thinking and you never know what could be next for Preferred Equine.”