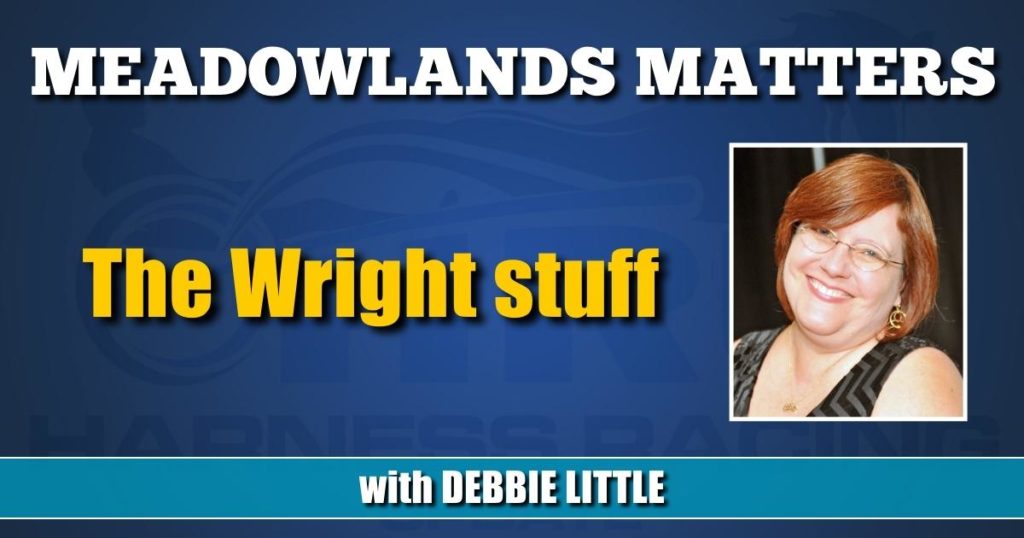 What does it take to hit the Kindergarten-Goldsmith Maid double?

Caretaker Vicki Wright apparently knows the answer. She pulled off the 2-year-old trotting filly stakes sweep at The Meadowlands in 2019 with Senorita Rita and 2020 with Anoka Hanover.

Whereas it might be rare to care for back-to-back winners of these two stakes, what Wright did stands out even more since she did it for two different trainers.

Wright had been working for trainer Noel Daley for about 10 years when he temporarily moved back to Australia in late 2018. Wright, now in her fourth decade in the game, had previously worked for several different trainers, including Hall of Famer Linda Toscano, around the start of this millennium.

“[Vicki and I] have been friends for years and years and years,” said Toscano. “So, when Noel was going home, I think she was a little bit worried because she wanted to make sure that she got into a situation where she would be comfortable. So, Vicki came to work for me and the only thing she told me was she wanted trotting fillies. She would deal with pacing fillies if she had to, but she didn’t want any males, she only wanted females.

“I have a tendency to train a lot of fillies to begin with because that’s what I always have. So, we were buying the horses and Senorita Rita came in the barn. She basically helped put the first harness on her for the most part.”

As much as Wright enjoyed working for Toscano, once Daley came back to the States after less than a year Down Under, she knew where she needed to be.

“As soon as [Noel] came home, she was so funny,” said Toscano. “I could see she was starting to get quieter and quieter and finally I realized what it was. And I said to her, ‘I’m assuming you’re going back to Noel.’ And she was like, ‘I didn’t know what to do, but I just feel like I have to go home.’ And I said, ‘Of course you do.’”

Just like Toscano, Daley attempts to give Wright fillies every year.

“It’s a crap shoot trying to give someone the best one, it never seems to work out,” said Daley. “She gets a kick out of Anoka being good. To do it back-to-back years is pretty cool.

“She’s had a series of good horses over the years. She worked for Freddie Grant and looked after Cambest.”

At 66, Wright is no longer interested in trying to out muscle colts and instead prefers to reason with fillies. She doesn’t know when or where the affinity for trotting fillies started, since she primarily took care of pacers in the past, including Dan Patch champ Darlin’s Delight, but they’re certainly what she prefers now.

“I like them because they’re like me,” said Wright. “I can relate to the bitchyness. I admire a good bitchy filly that wants to try. Trotting fillies can be a little more volatile so you have to blend with them and see what works for them. With fillies, we can have a meeting and figure out who’s going to come out where.”

When it comes to performing on the track and winning those back-to-back stakes, Wright can see similarities in Senorita Rita and Anoka Hanover as far as their temperament and work ethic.

“Rita was probably one of the nicest, sweetest, most professional horses that I’ve taken care of,” said Wright. “She’s on my top 10 list for sure, but Rita had some soundness issues that we were constantly dealing with.

“Anoka is extremely professional. Very smart. I think having a smart horse helps. One that will listen to you and trust you. We’ve got to keep the horse happy and the trainer happy.”

Just like her fillies, professional is a good word to describe Wright, who prefers to be one of the first to arrive at the barn. Unfortunately, since it’s still dark at that time, it can have a downside. Last week, she accidentally tripped over a piece of wood and broke her nose. She would end up needing four stitches in her nose, but as the blood was still gushing, she just asked another caretaker for a towel because she had to get a filly turned out and a stall done.

In addition to working for Daley, Wright is also the track photographer at Freehold Raceway. She has taken pictures – initially as a hobby – for as long as she’s been in the business, and as a caretaker, understands how important a photo of your horse can be.

Anoka Hanover didn’t win the Breeders Crown this year, but Adam Strom took a picture of the filly warming up that he gave to Wright. It meant a lot to her and it’s the kind of thing she tries to do for others.

“I like to do it for the other grooms, because there are 10 horses in the race and nine of them aren’t going to get anything,” said Wright. “And they may want a picture of their horse on that particular day.”

One of Wright’s photos that has gotten a great response on Facebook was of trainer Marie Ortolan Bar hugging driver Lucas Wallin after losing the Hambletonian with Cuatro De Julio.

“I knew when he came back with that horse and I saw her walking towards him that something was going on,” said Wright. “The way Cuatro just stood there like a perfect statue and you could see the look on Lucas’ face when she went to hug him, that’s everything. That’s the whole story right there.”

When Wright is taking these photos, either because she’s employed to do so, or just because she thinks a friend might want that memory, she does it with the same care that uses for her horses.

“She loves taking pictures,” said Toscano. “That’s a labor of love, too. She loves everything about the business. She’s just good people. She’s incredibly dedicated. They are your eyes and your ears and she very well fits that description. She’s been doing it a long time and still likes it. That says a lot.”