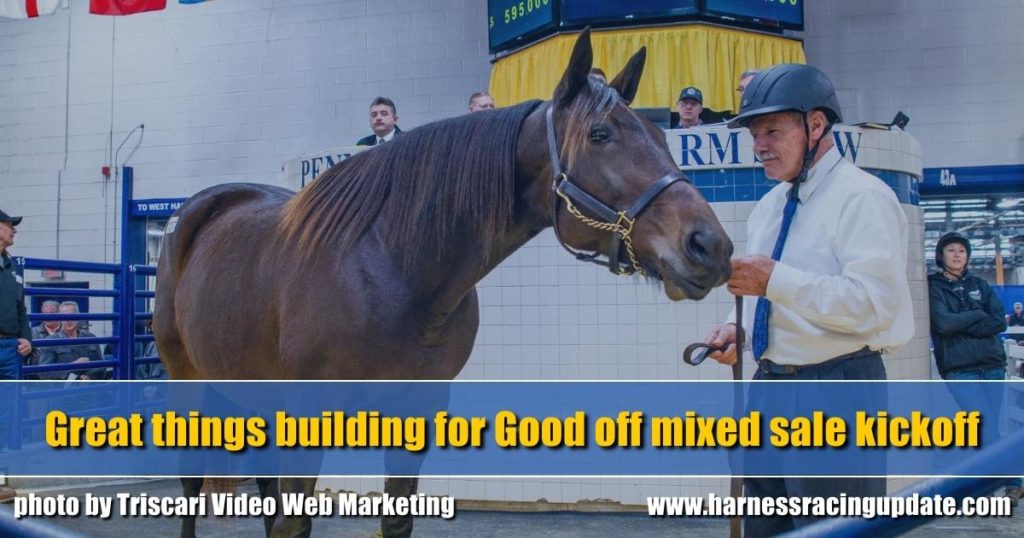 “Oh, it’s been a great ride,” said Good, who purchased Hellabalou for $42,000 at the 2019 Harrisburg sale. “I loved Hellabalou since I bought him as a yearling. It’s been very fun.”

Good, all through the week at the Standardbred Horse Sale Company’s (SHSC) annual sale, has been reinvesting off his good fortune. He purchased four pacing fillies through Lexington, a few more fillies through Harrisburg and – on Thursday (Nov. 11) – shelled some large cash during the stallion share section of the Mixed Sale.

“We’re building a broodmare band for sure,” Good said regarding his decision to purchase stallion shares. “I bought three yearlings – one Monday and two Tuesday – and [Richard] Nifty [Norman] is going to train them for us. I have a small farm in Maryland. We’ve got 50 acres and, at any given point, we could have 10 horses there; five broodmares and five yearlings. They are all Delaware [eligible].”

The stallion shares give Good the right to breed to the stallions he purchased an interest in through the life of the horse, giving him the option at future racing prospects or future sale ringers. All in all, Good’s homerun with Hellabalou has given him the opportunity to build a full-scale operation.

“They’ll be for sale in a couple of years,” Good said of the future yearlings. “We might keep a couple. [But] our goal was to buy a bigger farm and start selling yearlings.”

Through the morning on Thursday, auctions remained steady in terms of pace and overall price. Sales started to crescendo off the stallion shares and into the broodmare portion, highlighted in part by Herb Liverman’s eight-mare dispersal. After the final one stepped into the ring, Hip 1097, a Donato Hanover mare named What A Knockout, initiated a bidding war.

Dr. Bridgette Jablonsky sat toward the middle aisle in the sale arena bidding on the mare for Hanover Shoe Farms. As the price climbed to $590,000, the auctioneer pointed at Dr. Jablonsky for her next move. Appearing slightly hesitant to make another bid, Dr. Jablonsky committed and confidently nodded her head to signal a bid for $595,000. She won the auction, and a round of applause broke in the arena.

“We went over a little bit by the number that we had,” Dr. Jablonsky said on the price, “but, to me, she was the best in-foal mare in the sale by far. We’ve really wanted one from the Mission Brief family. She’s a Donato mare and Donato’s a great broodmare sire. She’s got a fast record. She’s in foal to the right horse. She’s a great-looking mare. I mean, there wasn’t a box that she didn’t click. She’s a true marquee mare.”

“Unfortunately, she can’t go to Greenshoe because she’s by Donato, but there’s Walner, there’s Chapter Seven,” Dr. Jablonsky said. “I mean, there’s so many good trotting stallion options and I think that’s why the trotting mare market is so high now, because there’s so many stallions you can breed them to and get your money back, if you get a nice yearling.”

The Liverman dispersal helped give Peninsula Farms a big day as they led all consignments by average with an average sale of $112,421 from 19 horses total.

“I was very pleased,” said John Duer of the results from the dispersal. “I’m sad to see them go because we won’t have him at the farm anymore, but I’m glad they sold well for the owner. It’s a sellers’ market right now and I guess if you’re going to sell them, it’s a good time to.”

Steve Stewart of Hunterton Farms snagged the second-highest priced horse of the afternoon when purchasing Hip 1110, the Muscle Hill mare Jolie De Vie (in foal to Walner). At first, the auction looked ready to end at the $200,000 mark with Stewart, but late and aggressive bidding made the final ding to Stewart’s wallet $425,000.

“I thought we were going to get her for a lot less,” Stewart said. “We had originally thought around $300,000 or so, but whatever. We’ll divide her up with our usual groups.

“We’re very excited. Any time you can buy a mare like that. We always like to buy something that’s happening in the family. We bought another one for $100,000 earlier and it was the same thing – a lot going on with the family. That usually bodes well for us. A lot of times people will buy horses a lot for what has happened in the past, which is fine, but, to us, we like current success… or action, I guess you might call it.”

Jolie De Vie has produced three foals in her breeding career, including the Walner filly Lilbitalexis (2, 1:52.2M; $173,362), who was one of the favorites in the Breeders Crown 2-year-old filly trot. She’ll join a pair of mares also heading to Hunterton purchased by one of the farm’s clients, Jean-Pierre Barjon: Hip 1106, the Father Patrick mare Graceful Lady (the third session topper at $360,000 and the dam of 2014 Hambletonian Oaks winner Lifetime Pursuit); and Hip 1093, the champion Glidemaster mare Maven (bringing the fourth-highest price at $285,000). Barjon won the auction on both the mares from the internet.

“It was a great day again,” said Dale Welk, president and director of operations for SHSC. “The sale is staying strong. Overall, I think it’s great for the industry, I really do. It’s great for the sellers, of course, and the consignors.

“I think overall it shows in the industry that people want to be here. We’re strong and we’re going to stay strong. I think tomorrow is going to come back just as good or better.”

The day was also strong for Preferred Equine, which led the first mixed session by a wide margin with $4,944,000 in sales for an average of $43,752 on the day through 113 horses. At the end of the sales session, the Preferred stable hands and employees arranged into three tiers while a photographer climbed his step-ladder to capture a group picture with just one day left in Harrisburg.

“It takes a lot of effort,” Preferred Equine president Dave Reid said of getting through the sale, “but we’re very fortunate that we try to have a good team of people here, year in and year out, and try to service our clients and service the public as well.

“The market was strong – pacers, trotters, stallion shares. The in-foal mares, I thought sold well. I haven’t analyzed it, but it felt pretty good up here. It was good to see European participation. I saw a couple of my old friends from Europe and they were able to make it over here. I think it’s onward and upward for tomorrow, starting off with the race mares and then going into the racehorses. I expect a good market tomorrow, for sure.”

Today (Nov. 12) concludes the Black Book Sale with a day of purely racehorses going through the ring, over 200 in total beginning at 10 a.m. Preferred is again slated to have a busy day, consigning a large amount of the racehorses entered including horses of high earnings, high prestige and rich pedigree.

“We’ve got Sandbetweenmytoes. We’ve got a sister to Rocknificent, a race filly. We probably have seven or 10 deep over here with the race mares,” Reid said. “Then, obviously the racehorses. We’ve got Mon Amour, who is racing [Thursday] in the Matron [finished 8th]. There’s a horse that’s in-to-go in the Kindergarten Series on Saturday night (Nov. 13), so we’ve got a lot of interesting prospects. It’s really deep and there’s something for everybody, for all jurisdictions, for all sized tracks. I’m really looking forward to it. The race fillies really look the part. They have deep pedigrees and they are good individuals, so I look forward to selling those as well.”