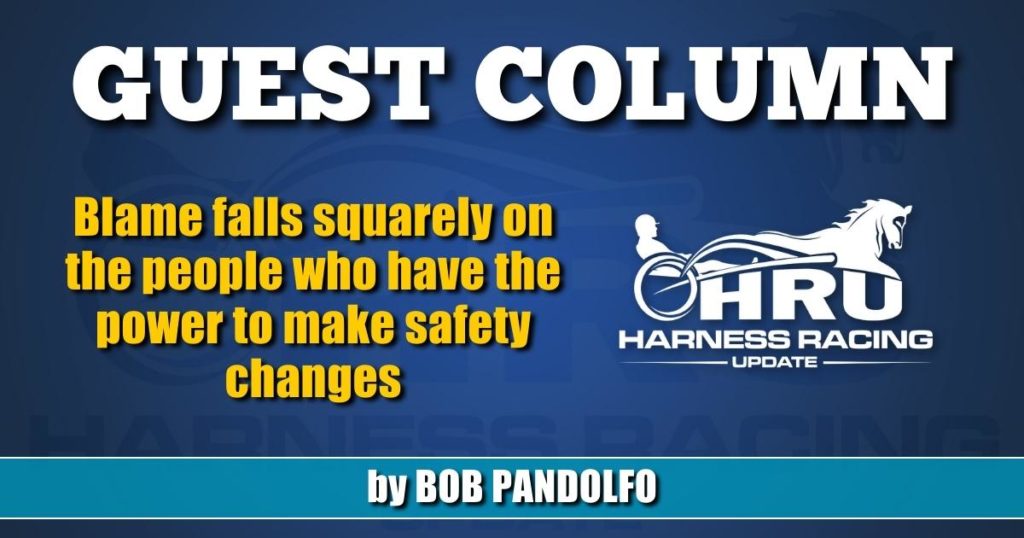 On Sunday, HRU published my guest column about the amount of accidents in the sport this year (full column here) (Editor’s note: There was also a correction to that original column that can be viewed on pg. 26 of the Monday, Nov. 9 issue that can be seen here). Unfortunately, that same day, Nov. 7, there was another accident, this time at Harrah’s Philadelphia. Three drivers went down. I believe all three are okay. That was the third accident in the sport in the span of nine days.

I just wanted to react to some of the comments that were made about the initial column. A few people, including two drivers, said that I was blaming the drivers for the accidents. I’m not suggesting that the drivers are doing anything illegal. In most countries, including most of Europe, Australia, and New Zealand, drivers are not allowed to lean back. In North America, drivers started leaning back years ago and no one stopped them.

There are two issues here. One is the effect the lean back has on the product. I’ve interviewed drivers and asked them if they think that the racing is as exciting as it used to be, and every driver I asked admitted that the racing isn’t as good as it once was because of the speed bias. They admit that it’s much tougher to win from off the pace. And, I believe, there’s no question that the bikes and the way the driver’s lean back contributes to that. If you put the horses in the rear 20 to 30 feet farther back, of course they’re not going to be able to catch up. It’s simple mathematics.

As for the safety concerns, that’s not as clear cut. But I’ve been writing and reporting on this sport for 46 years and I don’t recall ever seeing anywhere near as many accidents in one year as we’ve seen this year. At least three horses have been euthanized, that I remember, following on-track accidents, and many drivers have suffered injuries. And, in my opinion, it appears that the bikes, the long hand holds, and the way the driver’s lean back is contributing to the accidents.

Unfortunately, harness racing doesn’t have a board of directors. For comparison, over the last 10 years or so, the NFL has implemented various safety measures to try and mitigate injuries. Things such as concussion protocols, better helmets, penalties and fines for certain types of aggressive hits, etc.

In the late 1980s and early ‘90s, all harness tracks removed the hubrail, and that was a very smart safety measure. The hubrail itself caused accidents. This is another reason why I think the amount of accidents this year should be looked at. And, some years ago, the sport mandated that drivers wear safety helmets. Many drivers opposed the helmets, by the way. My point is, it’s not like the sport is incapable of making changes.

But let me make this clear, I don’t blame the drivers for boring speed-biased races and low payoffs, or for the accidents. Drivers don’t run the sport, they participate. The blame falls squarely on the people who have the power to make changes. This includes track ownership and management and anyone in the industry that has power and leverage. If your track has low payoffs and an inside speed bias, and too many accidents, perhaps it’s time for change.