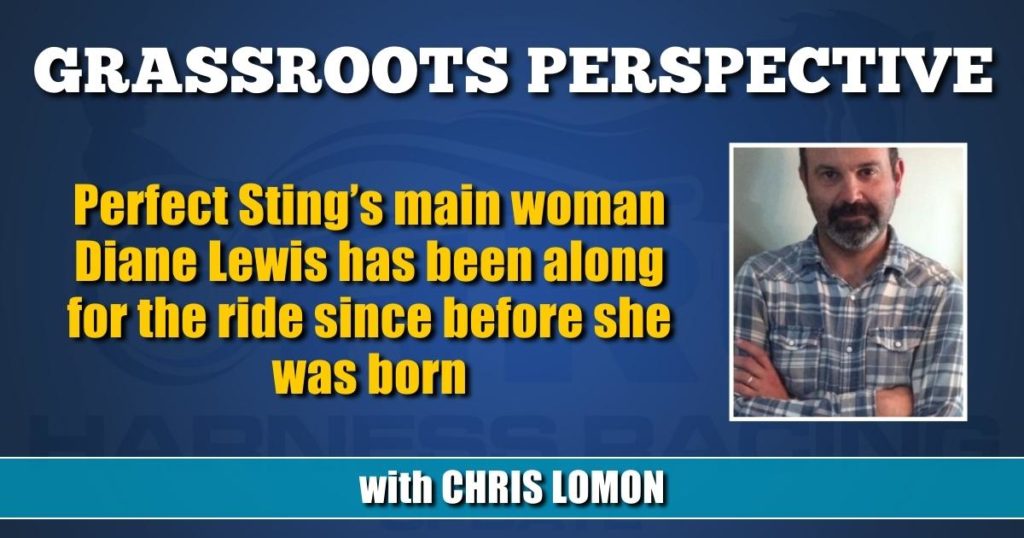 Diane Lewis was along for the drive even before she was born.

Just hours before doctors delivered her, Lewis was in the sulky, sort of, at a historic New York racetrack.

“My mom (Terry) trained a horse at Monticello in 2:07, the same day her water broke. So, there I was, with my mom in the race bike, and I was going down the stretch at Monticello.”

So, it would be rather fitting to say that the Monticello-born, Maryland-raised horsewoman was born to be in the standardbred business.

At 11, she was working weekends at Rosecroft doing stalls and horse laundry. Aside from putting a few dollars in her pocket, the job gave her a first-hand look and appreciation for the long hours the harness racing world demands.

Lewis, now working in the barn of Hall of Fame trainer Joe Holloway as a groom and barn manager, has experienced the horse racing world like few others have.

Aside from grooming three to four horses at a time, she’s busy tending to several other responsibilities.

Her days are anything but boring or repetitive.

“There is never such a thing as a 9-to-5 day. You’re here seven days a week. Some days are shorter than others and some days are longer than others. You never know what your day is going to entail. It could go smoothly and planned just as you organized it, or there could be a curveball in the middle of it.”

When those curveballs do come, Lewis is equipped for whatever it might happen to be.

And regardless of the outcome, there is, she noted, always a lesson to be learned.

“This business teaches you a lot of different things. It teaches you to go with the flow, it teaches you to manage a bank account, your checkbook, it teaches you patience. It really does teach you a little bit of everything. There are moments where you don’t have the time you really need to finish a task, so you learn how to be efficient. I don’t think this business is one way. It educates you in so many things.”

Good or bad day, it’s the horses that keep her coming back, just like they always have.

Whether they happen to be claimers or champions, each horse leaves a lasting impression on Lewis.

“I’ve had a lot of ups and downs in this business, but I’ve been lucky to have had so many great horses to learn from, horses that have taught me so much. I’m very fortunate to know what it’s like to have overnight horses and Grand Circuit horses. I’ve also been given the chance to break babies and watch them have success on the racetrack.”

“From the day he walked into Joe’s barn, I’ve been his groom, took care of him and broke him. To watch a horse from the very start, to see him turn into a champion, it’s probably my biggest accomplishment in horse racing.”

But far from Lewis’ only success story.

“I’ve had a win as a trainer and I’ve won as an owner. Sailallone (a pacing daughter of Silky Stallone) gave me my first win as an owner. I was in Delaware and paid $1,500 for her. She ended up being a $15,000 claimer in the end, but she made $87,000 the first year I had her. She ended up having bad ankles, so we retired her and then I bred her. She had a baby who made it to the races, but didn’t do well, so she became my niece’s riding horse.

“For me, watching them from the time they are babies, training down and making it to the races – that’s just so rewarding and exciting. I took care of Dedi’s Dragon when he beat Captaintreacherous in the Monument Circle in 2013. That was a big highlight. I took care of Charisma Hanover, who beat I Luv The Nightlife at Balmoral. Zero Tolerance is another one who I had from day one. I was the only groom she ever had. She’s probably my all-time favorite. She had her issues, but she always would grind it out and give everything she had no matter what.”

A pair of stars made a name for themselves in the Empire State, a duo who delivered Lewis with two memorable campaigns.

The thought of caring for more of those top-caliber horses is something that continually motivates Lewis.

Lewis will, however, shed a tear of joy on occasion when she watches her horses on the racetrack.

“When Perfect Sting qualified his first race this year, I cried when he crossed the finish line. So, I cried at a qualifier. It’s just certain moments that get to you. When you have those horses, ones that win your heart or ones that are so talented, it really does mean the world to you.”

Not even a head cold can dampen Lewis’ enthusiasm for racing and the horses.

As she learned from watching her mother and grandparents for so many years, toughing it out comes with the territory.

“You just have to get it done. The guy who ships our horses asked me this morning, ‘Do you ever take a break?’ I just looked at him and said, ‘Do you know anyone in this business who ever takes a break?’ He just smiled and said, ‘You’re right… stupid on me for asking.”

Not that Lewis is complaining about her demanding harness racing career.

“I guess I was destined to be here and that’s fine with me. If I had one goal it is to be the best I can be and then do better. Every horse that walks in here and every horse that is under my care, I always challenge myself to bring out the best in each one.”