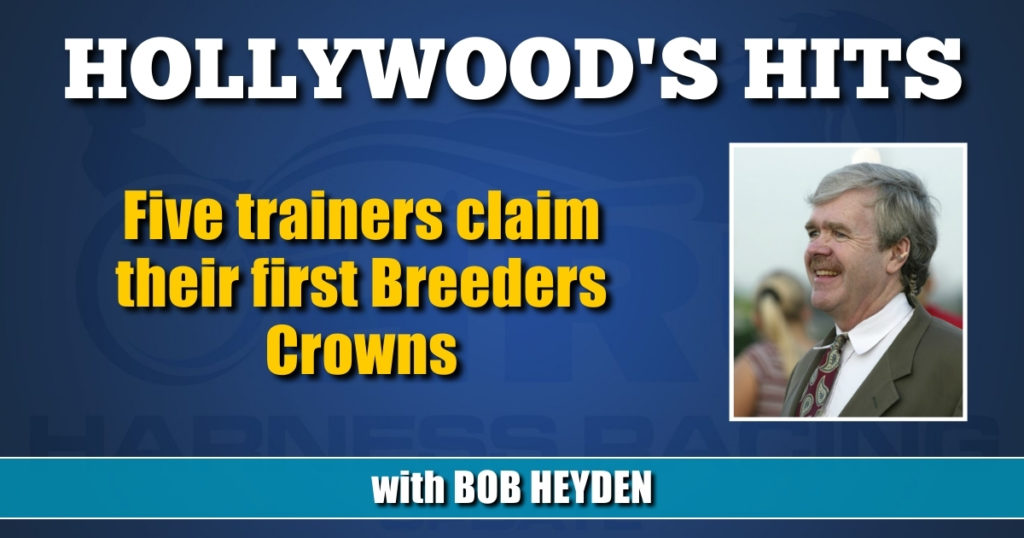 They each won the Breeders Crown twice — Artsplace in 1990 and 1992 and his son Art Major in 2002 and 2003. Each has had a standout daughter in the Brett Pelling barn. Artsplace’s daughter Armbro Romance in 1998 became the first ever sub-1:50 female and Art Major now has Test Of Faith who drew clear in this year’s Breeders Crown and surpassed $1 million for the year and made a strong Horse Of The Year statement in the process. Art Major has now sired three Breeders Crown winners seven years apart — twice. Santanna Blue Chip 2007-J K She’salady in 2014 and now Test Of Faith.

The winners of this year’s four richest races were all absent from Breeders Crown finals.

and Captain Corey winner of the $1 million Hambletonian.

Muscle Hill tied Speedy Crown with his siring win on Friday night for Lucas Wallin, who got on the Breeders Crown board with Rebuff, the 14th Crown winner sired by Muscle Hill.

Always B Miki had quite a weekend — winning three Crowns of the four for 2- and 3-year-olds. The other nine Crowns were won by nine different sires. On Saturday, Always B Miki son Perfect Sting won for his second straight year and Monte Miki and Niki Hill got it done on Friday.

Streak over for Gingras

Yannick Gingras’ streak of nine straight years winning at least one Crown came to an end this year — barely. He twice lost by a nose with 2-year-olds.

Atlanta has gone past $3 million and is about $75G shy of the retired arch rival you may have heard of — Manchego ($3.14 million).

A 10-horse field with just three different sires represented? It happened this year in the Crown Open Pace when Somebeachsomewhere had five finalists, Captaintreacherous had four and Rockin Amadeus had one. Ironically, it was Rockin Amadeus who upended Captaintreacherous in the 2012 2YOCP Breeders Crown in Canada. Guess who won this year’s Open Pace? Ocean Rock, the lone son of Rockin Amadeus, whose brother Rockin Image sired a 2015 Breeders Crown winner Freaky Feet Pete.

There were no Shadow Plays in the Breeders Crown this year, which is incredible because this year he became the first sire ever to have the Meadowlands Pace winner and the North America Cup winner from two different horses: Lawless Shadow and Desperate Man. Plus, on the Opening Night of the Breeders Crown, Bulldog Hanover, another Shadow Play, tied the Hoosier Park track record for 4 Year Old Pacers at 1:48.

Altar finished ninth after a break at 50 cents on the dollar in the sophomore pacing filly Crown. She is the only Crown favorite in 2020 or 2021 to not finish in the top three.

Felicityshagwell S won the Breeders Crown after a 1-for-10 season in 2020. Bella Bellini was 0-7 last year and dominated the sophomore filly trotters and nailed down divisional honors.

Jujubee sets a 1:49.4 track record on Hambletonian Day, but not in the Hambletonian. Then he set a stakes record in the Breeders Crown for a trainer making his debut (Greg Wright, Jr.). He’s a homebred too. He’s 14-for-18 and maybe the best story of the year after a $13,066 freshman campaign from five starts.