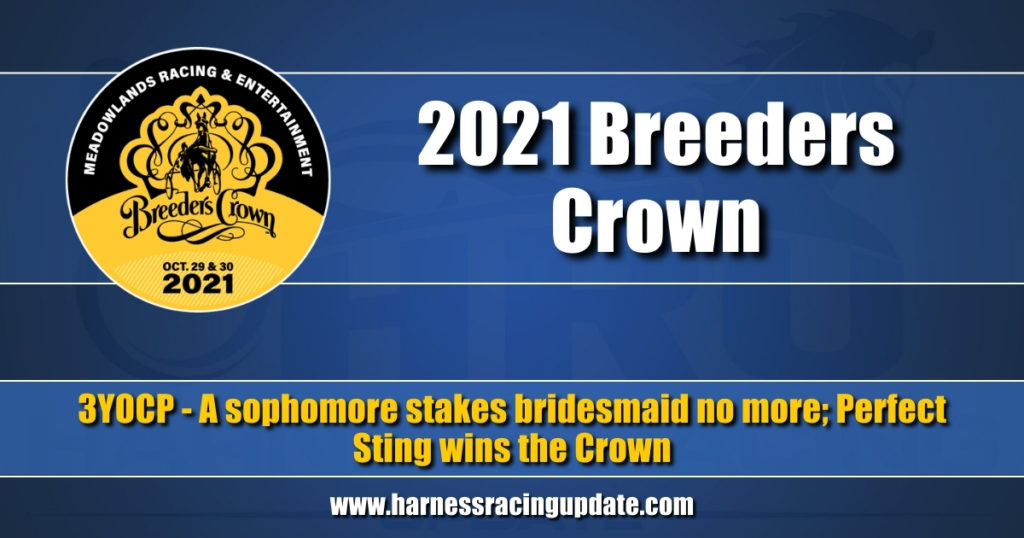 In the week leading up to the $600,000 Breeders Crown final for sophomore pacing colts, trainer Joe Holloway made the case for his charge, Perfect Sting, not receiving his due respect in the division. Saturday afternoon (Oct. 30) at The Meadowlands, the royally-bred son of Always B Miki—Shebestingin silenced his doubters and made a statement of his own. Last year’s Dan Patch Award winner and driver David Miller took aim at leader Charlie May in the stretch and put away his rival late in the mile by a length to collect his second Breeders Crown trophy with a 1:49.4 performance.

“He’s been the most consistent and he’s made the most money,” said Holloway. “I realize we lost a few races it looks like we should have won. I just think he’s a great horse and he deserves it today.”

Miller steered both Always Be Miki, a two-time Crown winner in his own right, and world champion Shebestingin during their careers. He first laid eyes upon the colt before he was first broken, and has become attached to Perfect Sting through the last two seasons. That made Saturday’s win all the more special.

“It’s very gratifying. All year long, he’s been the bridesmaid, and it’s nice to see him win a big race. A few of those (losses) were heartbreaking. I’m so proud of him, so happy for the horse. It’s a tough 3-year-old season and he’s stood up every fight and made a good showing of himself,” Miller said.

For any other horse, a seasonal slate of 6-8-1 from 15 starts and earnings topping $970,000 would signal a tremendous campaign. However, the burden of expectations placed on Perfect Sting entering the 2021 campaign produced a massive target for the horse. After winning each of his 10 freshman starts, including last year’s historic dead heat in the Crown final at Harrah’s Hoosier Park, the colt danced in all the big dances this year. Unfortunately, instead of scoring decisive wins, Holloway’s pupil collected a series of narrow runner-up performances in the North America Cup, Meadowlands Pace, Cane Pace, Little Brown Jug, and most recently, the Tattersalls Pace. It led to the Hall of Fame trainer quipping the horse was “six feet from greatness” after an emotional and trying season.

“Absolutely, he’s raced good and he’s beat horses. We go up there for the North America Cup and they were raving about Bulldog (Hanover) and he comes first up against him and then we get nipped by Desperate Man. Then, we’re in the Jug and Lou’s Pearlman,” said Holloway. “It’s been tough, to say the least.”

Saturday, if the winning margin was six feet it was a mile, as Perfect Sting gunned down Don Tiger’s homebred to capture a signature win in the glamour boy division for Holloway and breeders/owners Brittany Farms and Val D’Or Farms. In rein to Hall of Famer Miller, the sophomore and his pilot set their sights on the lead early from post five, producing a pocket trip behind Charlie May and Brett Miller, who brushed to the front after a :27.3 opening panel. David Miller sat through fractions of :55.4 and 1:23.4 before leaving the pylons with the slightest of favorites. In the stretch, Perfect Sting made it look easy, pacing by Charlie May with a :25.4 kick on the way to his seventh seasonal score and 17th in 26 career starts. Chase H Hanover finished five lengths back in third.

“I felt pretty confident halfway through the stretch,” Miller said of the drive to the wire. “I was getting to Charlie and I hadn’t pulled his plugs yet. When I kicked them out, he took off.”

“When David got to the front fairly easy, I felt like the first quarter was slow enough that if I let him keep cutting it out, we would have no shot. But at the same time, I think David might even have been waiting to get his horse covered up,” Brett Miller said of his strategy with runner-up Charlie May. “Really, a half in :55.4 for those colts, that’s not anything crazy. We just turned it into a sprint, and he just out-sprinted me. Most of the time when you come home in :26 on a track that’s not super fast, that’s enough to do it. But Perfect Sting was pretty vicious today.”

The victory produced several significant Breeders Crown notes. Perfect Sting is the first male pacer to win trophies at 2 and 3 since Artiscape accomplished the feat in 1997 and 1998. The win was also Holloway’s first in a sophomore pacing colt final since Jenna’s Beach Boy won at Woodbine with a 1:52.4 effort in 1995. The son of Beach Towel, like Perfect Sting, delivered Crown wins at 2 and 3 (and later 4) for Holloway, who now counts nine Crown Championships to his credit. Miller added his 29th Breeders Crown victory. He trails only Ron Pierce (30), Brian Sears (35) and John Campbell (48) in winner’s circle visits in Crown finals.

Perfect Sting’s win was also yet another signature win for George Segal’s Brittany Farms, who leads all owners with 21 Breeders Crown Championships. The win also broke a tie with Hanover Shoe Farms for total trophies by a breeder (27) entering Breeders Crown weekend. Does it ever get old for Segal?

By virtue of his Crown win, Perfect Sting earned an invitation to the TVG final. There is also the looming question of where the colt will stand stud after the season. Segal was non-committal on both fronts after the victory.

“We’ll get to that after we finish enjoying this day,” he said.

In a season where their champion has suffered several tough losses prior to Saturday’s thrilling triumph, the connections have earned that right.

— with files from Ken Weingartner