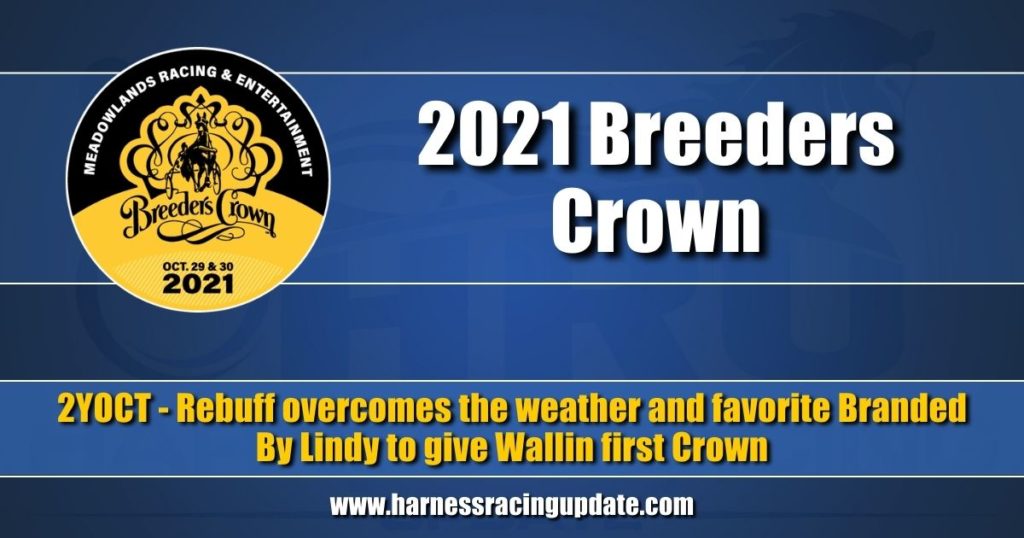 Rebuff didn’t always strut his best stuff, but there was doubting his maturity and mettle after a polished performance in the Breeders Crown final for 2-year-old male trotters.

On a rainy, blustery Friday night (Oct. 29) at The Meadowlands, Rebuff put on a world-class show for those in attendance, those tuning into watch, and for an ownership group that spans the globe.

No doubt all three were on top of the world after Rebuff’s stellar showing against nine rivals.

In rein to Tim Tetrick, the bay colt was overshadowed – both on the stat sheet and the tote board – by Branded By Lindy, the son of Chapter Seven who was chasing his eighth straight victory.

And while he wasn’t prominent early in the $600,000 rookie final, a revved-up Rebuff was at the top of his game when it counted the most.

Sitting seventh after a :27-flat quarter set by Branded By Lindy, Rebuff had moved into fifth position after a half-mile reached in :56.1. Second at Roger Huston’s stretch call in 1:25.2, he still had plenty left to do as Branded By Lindy held a two-length advantage.

Tetrick and Rebuff were able to get past Branded By Lindy, but then needed to rebuff an inside charge from a determined Fast As The Wind.

At the wire, Rebuff wouldn’t be denied, stopping clock in 1:55.

Wallin, who celebrated his first Breeders Crown title, was elated at the effort from his stable star.

“We’ve been very, very high on him since we bought him, actually, but he was very immature and it took us a couple of starts to get him here and he really came up big here,” said Wallin.

The performance was even more impressive considering it was contested under less-than-ideal racing conditions.

Before the field was sent on its way, Wallin wondered how his young charge would handle the steady rain and high winds.

“For sure, especially for 2-year-olds, it’s tough on them already and then with this wind and this rain. Like I said, it’s the same for everyone, but I was… maybe not worried more than anyone else.”

In the end, he didn’t need to be concerned at all.

Early on Rebuff’s career, however, Wallin did have some reason for trepidation, a sentiment that was shared by Steve Stewart, who co-bred the horse with Michael Andrew.

“He could always trot,” said Stewart. “I thought he was always somewhat of an immature yearling and I was very happy to see Lucas… he did an unbelievable job with him. Watching him race this summer, he was very patient with him and that’s what the horse needed. He needed… not to hurt him. And they raced him from behind, like he said, and it’s a wonderful thing.”

Although there were mixed results ahead of a 1:52.2 career-best win in the International Stallion Stakes on Oct. 8 at The Red Mile, the $200,000 purchase at the 2020 Lexington Selected Yearling Sale finally hit his best stride.

“Tetrick put him in the perfect spot again [tonight]. He’s very, very fast and he warmed up really good, maybe a little too grabby, but in the race he looked very good so I was confident.”

On a blustery, damp Friday night in New Jersey, Rebuff was the one looking confident, storming down the lane to notch the biggest victory of his career to date.

Aside from a few extra carrots and plenty of pats, the horse who now sports a 4-2-1 mark from 10 career starts, will get a well-deserved break from lining up behind the starting gate.

“He’s very high on himself,” said Wallin. “This is the horse’s last race for the year and he’ll get a nice vacation.”

As for the conditioner, just like his diverse ownership group, he’s simply thrilled to be on top of the world.