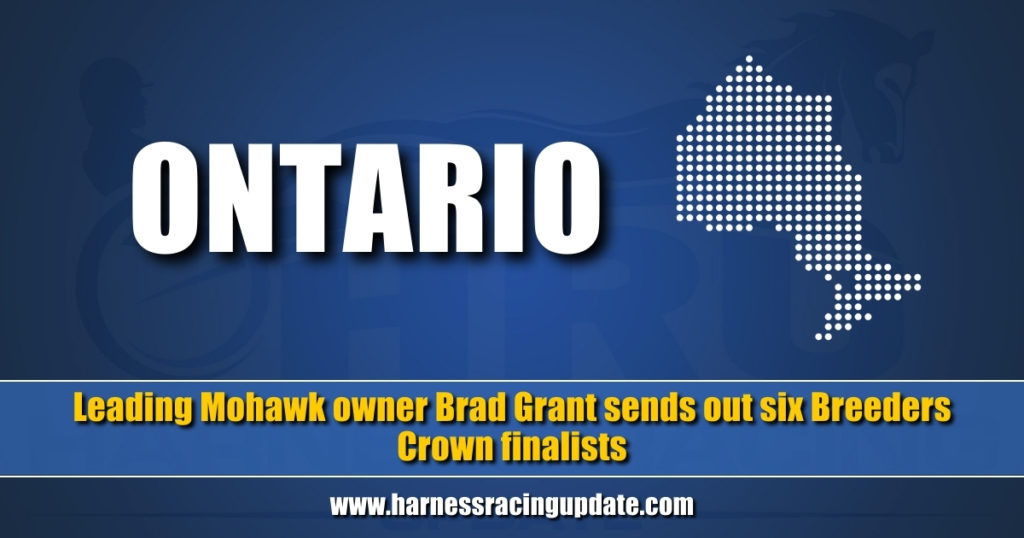 But the man from Milton, ON said he might be cheering hardest for super trotting mare Atlanta to earn her first Crown.

Brad Grant, one of Woodbine Mohawk Park’s perennial leading owners, will send out six horses this weekend in Breeders Crown finals at The Meadowlands racetrack in New Jersey, but he will be rooting especially hard for his star six-year-old trotting mare Atlanta to earn her first Crown.

In fact, it’s the reason Grant, from Milton, ON, and his U.S. ownership partners — Crawford Farms and Howard Taylor — along with trainer Ron Burke, opted to put Atlanta in Saturday’s (Oct. 30) $300,000 Crown final for trotting mares (race 5, post 2). In both 2020 and 2019, Atlanta finished third racing against the boys in the more lucrative open trot.

“This is a mare that is one of the greatest and she deserves to have a Breeders Crown on her resume and she does not have one. So, we all believe the right spot for her was in with her own. Hopefully, she will get it done,” Grant said of the 2018 Hambletonian winner who has earned just shy of $3 million (U.S.) in her career. “This is the last big race that I can think of that she hasn’t won. It’s not going to change her status if she doesn’t, but, again, if there’s anybody that deserves to have a Breeders Crown on her resume, it’s her.”

In that same mare trot, Grant, and partners will also send out his other Hambletonian-winning filly Ramona Hill, who was a Breeders Crown winner at age two. Now four, the mare has spent most of the year injured, but trainer Tony Alagna has her in good form lately.

“Tony has done a great job nursing Ramona (Hill) along… I thought she raced outstanding the other night coming three and four-wide off the turn and come from back in the field to finish fifth (in her Crown elimination),” Grant said. “I was really, really pleased with her. She’s drawn a decent position (post 5). Hopefully, she can get spotted and we’ll see what happens from there.”

The Breeders Crown is being split between an evening card on Friday (Oct. 29) for the four freshman finals that starts at 6:20 p.m. (Eastern) and an afternoon card on Saturday for the remaining eight sophomore and older events that begins at noon.

Grant, who entered seven horses in Crown eliminations and qualified all but one for the finals, is the lone owner of 2-year-old trotting colt Gigondas, who races tonight (race 6, post 5).

“I bought him probably two starts in. Tony (Alagna) was pretty high on him. We didn’t have a great start with him. I think we had three or four fifths in a row and then we won a race. Tony kept saying, ‘Be patient, Brad,’ and I used to say, ‘I’m not a doctor. Doctors have patients.’ We would laugh about it and he would say, ‘He’s getting better, he’s getting better.’ He continues to race better and better. He raced really well in his elimination. Again, he’s in tough, but he finished second in his elimination, so I guess that gives him the opportunity,” Grant said.

“It’s Academic is probably in over his head,” Grant said. “I bought him at the Lexington Mixed Sale a year ago and I bought him just to bring up (to Woodbine Mohawk Park) as a racehorse to race in the preferreds. If there’s something good that came out of the pandemic, when Woodbine Mohawk Park shut down, I shipped him back to Ronnie (Burke) and the rest of the year has been history. He’s just raced outstanding. He’s probably raced over his head. Ron and his team have done a tremendous job in getting the most out of him this year, so Ron thought he deserved a shot, so we put him in.”

Lifetime, Grant has three Breeders Crown victories. He won his first when Stay Hungry triumphed in 2017 at Harrah’s Hoosier Park and took two more on his home turf at Woodbine Mohawk Park in 2019 when Ramona Hill and Reflect With Me both won.

Grant said he can’t be in New Jersey for tonight’s races, but he is planning to be there for the Saturday card.

“Winning a couple of times (this year) would be nice,” he said.

Woodbine Mohawk Park regulars are well represented in the 12 Crown finals. Among drivers, four will be driven by leading reinsman James MacDonald, three by Bob McClure, two by Paul MacDonell and one by Trevor Henry. Ten horses are trained by Woodbine regulars, including four by Luc Blais for the Determination Stable and two by Robert Fellows. Multiple horses, beyond Grant, feature ownership by Canadians that race regularly at Woodbine Mohawk Park. Apart from Determination’s four horses, Canadian native Robert LeBlanc has four finalists, John Fielding has two and Threelyonsracing has two.