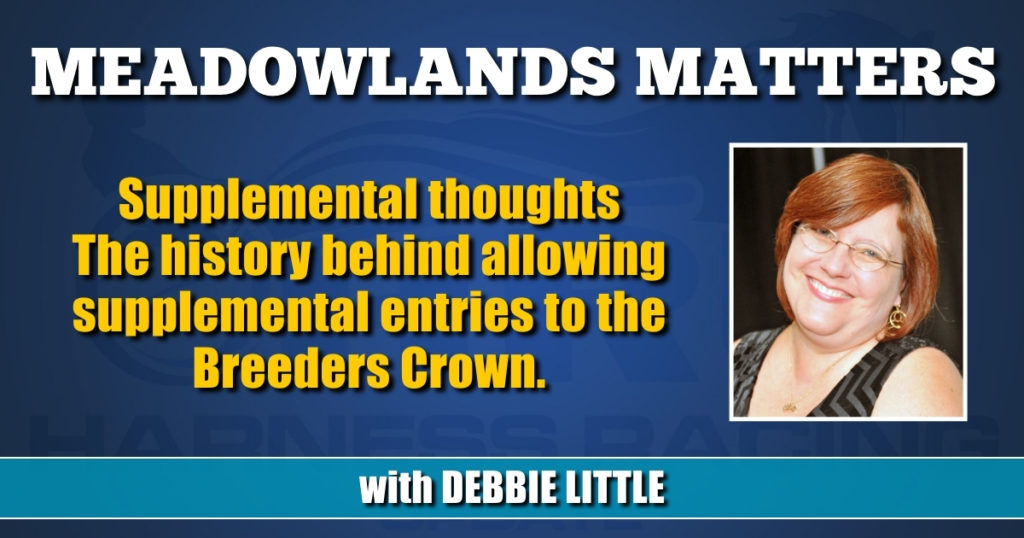 The history behind allowing supplemental entries to the Breeders Crown.

The day before the box closed for this weekend’s Breeders Crown eliminations, four owners chose to supplement their horses.

“It’s a lot of money and it’s purposely a lot of money because the program is built on a schedule of payments from birth to 4 years old,” said Moira Fanning, the chief operating officer / director of publicity of the Hambletonian Society.

Hot Mess Express, a 3-year-old pacing filly who has spent much of the season in the top 10 in the Hambletonian Society/Breeders Crown poll, was not supplemented by her owner, Sam Bowie.

“Obviously, she wasn’t eligible for it, so I would have had to supplement her,” said Bowie. “The year that she had and the performances she had, I believe she’s one of the better 3-year-old pacing fillies in the country. But at the same time, I just decided to opt out and not go there this year and race her in three races at Hoosier Park and then shut her down and bring her back as a 4-year-old.”

The decision not to go to the Crown was a difficult one for Bowie, but he chose to stick with the plan that he and trainer Tony Alagna had set.

“As an owner and being able to play on this level and to think that you have a legitimate chance of winning a Breeders Crown, it was a very difficult decision,” said Bowie. “But I always say, and I tell my children, it was the right decision because it was my decision and you live with it and you go on. But I’ll be watching the Breeders Crown 3-year-old pacing filly race very closely and visualizing what it would have been like with her being in there.”

The Breeders Crown has allowed supplements since 1986, but initially were not done in advance.

When the suggestion of supplements first arose, Tom Charters, executive vice president of the Hambletonian Society, approached then Meadowlands’ director of racing Joe DeFrank for his thoughts.

“Joe said unequivocally that he didn’t believe in supplements, but if we were going to do it, we should allow people who paid into the race to have the advantage to know who the supplements are,” said Charters. “In overall fairness, I think you have to respect the people that have paid in. You’ve already told them who’s eligible and then you have this new horse eligible and they ought to be able to know that, too.

One of Charters’ favorite supplement stories of all time involved the 1986 mare trot contested at Scioto Downs.

“There was a good mare and she just happened to be owned by a man I groomed horses for and I hadn’t seen in 10 years,” said Charters. “She’d been an outstanding filly in Ohio sires and he came into the race office and I was at the counter and he had his checkbook out and he looked at it for the longest time and he said, ‘You know, we’re talking about a year’s college tuition for my grandchildren’ and he folded up his checkbook and put it back in his pocket and walked away.”

Since most of the changes have to be in the conditions before payments are taken, they take time to implement.

One such change was not requiring a yearly supplement from the same horse.

Just like the Hunger Games, the supplemental odds are not in your favor, but they’re better than you might think.

Prior to 2021, there have been 112 supplements to the Breeders Crown, 52 of which have either broken even or made money. None of those 52 horses finished worse than fourth and all but three were third or better, including 21 winners. So, 46 per cent of the time smart decision making was used when supplementing.

“The one thing I pride myself in is that the Breeders Crown has been dynamic since we started,” said Charters. “We weren’t afraid to tweak it based on horsemen’s suggestions and based on directors’ suggestions. We didn’t tweak it frivolously but we did change things.”

The nine Breeders Crown eliminations for 2-year-olds will get underway tonight (Oct. 22) at The Meadowlands at 6:20 p.m. The 10 Crown elims for 3-year-olds and older horses will take place on Saturday afternoon. First post is noon with race 3 being the first Crown event.