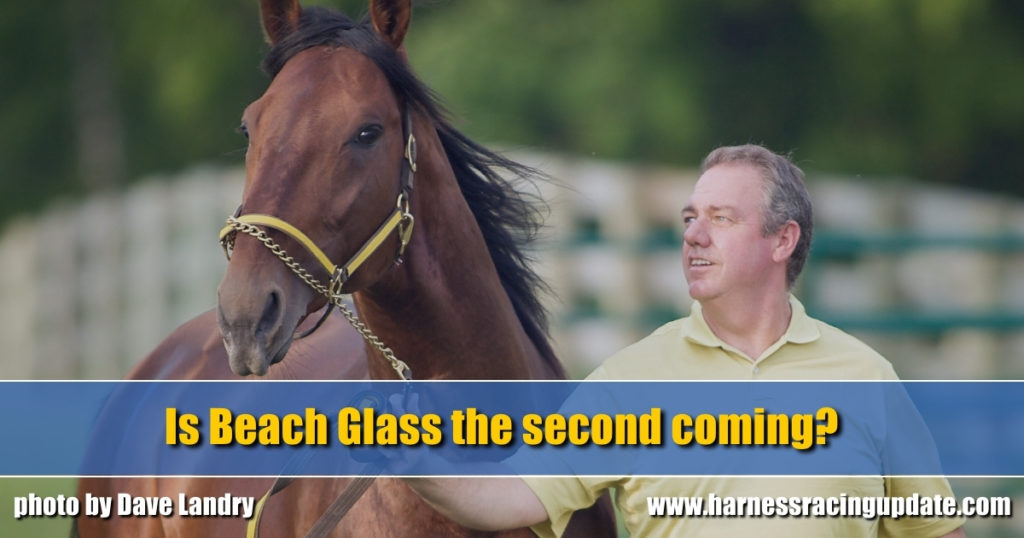 It’s much too early to anoint Beach Glass as the next Somebeachsomewhere, but a prodigious start and a story as compelling as that of his famous father — for the same Maritime connections — has many hoping the colt from the late stallion’s final crop is the real deal.

Brent MacGrath has said more than once that having another horse as talented as Somebeachsomewhere would flat out never happen. It was the main reason he didn’t take his share of Beach’s riches and go nuts buying 30 more horses to try for a massively improbable repeat.

There would never be another Somebeachsomewhere — at least not for him.

Friday (Oct. 15), the day after his 2-year-old colt Beach Glass prepped for the Breeders Crown with a jaw-dropping overnight at Woodbine Mohawk Park in which he destroyed a field of 3-year-olds by nine-and-a-quarter lengths in 1:51.1 (replay here), MacGrath held firm that the odds were “not great” that he has another horse the calibre of Somebeachsomewhere, who set a 1:46.4 world record, was 20-for-21 on the track and earned over $3.2 million en route to multiple Hall of Fame honors.

Still, the man that trained and co-owned Somebeachsomewhere can clearly see what most of us see — the eerie similarities between the two horses and their backstories.

“It’s funny that when Beach was coming up through the ranks we were talking about, ‘What if? What if? What if?’ and now, all of a sudden, how the f – – – can this be happening again to us again? It’s just un-fricken-believable. It’s surreal,” MacGrath said.

The prospect of maybe — just maybe — a repeat of one of the greatest harness racing stories of the modern era has piqued attention in a time when the sport could really use another hero.

MacGrath is the owner of several car and tire dealerships in the Maritimes, but has a lifetime of experience training a small stable of horses. Fifteen years ago, he cobbled together five businesspeople from the Maritimes to buy a single Ontario-sired horse. He picked out one yearling in October of that year on his first trip to Lexington, KY and was able to purchase that horse, bred by Stephanie Smith-Rothaug of West Jefferson, OH, at exactly his limit.

Beach Glass is a homebred, which might make his rapid ascension more unlikely than that of his Hall of Fame papa, until you look at Beach Glass’ bloodlines. Apart from his sire, who stood at Hanover Shoe Farms and has produced the winners of more than $164 million from 10 crops, Beach Glass is out of the Bettors Delight mare Im With Her, a daughter of prolific mare Hattie. In 2016, MacGrath and Co. purchased Im With Her — originally named, appropriately-enough, Have Faith Hanover — from the Hanover Shoe Farms consignment at the Standardbred Horse Sales Company yearling auction in Hanover, PA for $90,000.

“We bought her 100 per cent to breed to Beach and, obviously, we’re partners with Hanover and we wanted to deal with them if we could. And I really wanted a Bettors Delight mare because they were showing up breeding to Beach,” MacGrath said.

Im With Her was a handful as a 2-year-old — “She was nasty, really nasty, kicking, squealing and pouty,” MacGrath said — but still earned over $50,000 as a rookie, including fifth-place finishes in both her elimination and final of the 2017 Breeders Crown for 2-year-old pacing fillies at Harrah’s Hoosier Park.

In January of 2018, while MacGrath was prepping Im With Her in Florida for her 3-year-old season, cancer claimed Somebeachsomewhere at the untimely age of 13.

MacGrath had hoped for big things from Im With Her on the track during her sophomore year because most in Hattie’s family have been unremarkable 2-year-olds that starred at 3. But when Somebeachsomewhere died and there was only a small batch of frozen semen left that could be legally used that year, he consulted Hanover’s vice-president Dr. Bridgette Jablonsky about his best course of action — to continue racing Im With Her and breed her via embryo transfer with a surrogate mare or take her off the track to breed her.

“(Jablonsky) said to me, ‘If I was your partner, I would be pushing to pull her from training and breed her herself. She’s the one that’s going to carry the good foal. She’s the one that’s going to get the job done here.’ She said the only time we would use a donor or a surrogate mare is if we had to. She said, ‘You don’t have to. You didn’t buy this mare to race, you bought her to breed, so I’d be breeding her.’ So, that’s what we did,” MacGrath said.

MacGrath said he only can dream Beach Glass will eventually pay similar tribute to his late sire, as unlikely as that might be now.

He’s prepared to wait find out.

“He was a very late-developing colt and I just waited on him,” MacGrath said, explaining why Beach Glass first showed up in September.

Beach Glass has had just one qualifier in Truro, NS on Sept. 12 and three overnight starts at Woodbine Mohawk Park through which he has remained undefeated. Despite having limited experience, MacGrath said Beach Glass acts like a 6-year-old that can be driven with two fingers.

The Maritime connection is just as strong. Somebeachsomewhere also got his start in Truro to great acclaim from the locals, but MacGrath laughed when asked if he was superstitious and simply wanted Beach Glass to follow his sire’s story to the letter.

“If it wasn’t for COVID we’d be in Florida. Make no mistake about that,” MacGrath said. “Qualifying him in Nova Scotia, that was 100 per cent a timing thing. I wanted to try for the Breeders Crown. I thought we had that kind of colt. If I had shipped him (to Ontario) and had to wait a week to qualify (it might have impacted his schedule). I thought I could qualify him in Truro – the qualifying time was 2:01. I had been in 2:01 five weeks before that… I thought if he wasn’t ready to pace in :54 or :55 off of that, then he’s not what I think he is anyway. So, I took him to Toronto. We shipped him up the day after we qualified him and I said to Paul, ‘Let’s throw him in next week. The horse has had it easy, I’ve been easy on him all summer, so throw him in for next week to race. We’ll take him into Mohawk and go a mile in 2:08 and let him see the facility and race him.’ That’s what we did.”

On Sept. 20, in his career pari-mutuel debut, Beach Glass won by six-and-a-half lengths in 1:54.1 at Woodbine Mohawk Park. On Sept. 28, he dropped his mark to 1:52.2 with a two-length score at the Campbellville, ON track before getting a week off prior to Thursday’s start.

The goal now is the Breeders Crown at the Meadowlands and, perhaps, the Governor’s Cup at the East Rutherford, NJ track after that. But MacGrath is more concerned about next year than this one.

“Obviously, I let the horse do the talking and they are ready when they are ready to be ready. I wouldn’t be as keen to go to the Breeders Crown if it wasn’t for Paul (MacDonell)… not going for Paul, but knowing that Paul is not going to hurt this horse. He’s got a lot of experience and I’m quite comfortable doing that. I would not do it with lots of drivers, but I’m good to go,” MacGrath said.

“All we want to do is go down there and educate him a little. Put him up against the big boys and see how he handles them… and don’t tear him all to hell. Paul will not do that.”

MacGrath’s fierce loyalty to MacDonell — their friendship and partnership goes back to a chance meeting at Greenwood Raceway in 1985 — is admirable. MacGrath takes umbrage with those that suggest Beach Glass is just the horse to give the 58-year-old Hall of Fame driver a career boost.

“You wouldn’t believe the people who have said something about it giving Paul’s career a lift. I said, ‘I don’t know what you’re talking about,’” MacGrath said. “He doesn’t drive a bad race when he’s on any power… What pisses the owners and trainers off is that he doesn’t leave with the 75-1 shots. I wonder why?”

As for his fellow owners in the Schooner II Stable of Truro, NS, most involved in Somebeachsomewhere’s ownership are on board again — minus Reg Petitpas and Pamela Dean and MacGrath’s friend and business partner Garry Pye, who died in April at age 77.

Stu Rath and Jamie Bagnell are back and Pye’s widow Mary-Louise has replaced her late husband in the group.

As for Beach Glass, some observers have said he reminds them of Somebeachsomewhere in stature.

“What I would say is that he’s a bit taller than Beach,” MacGrath said. “I’d say that he’s not quite the specimen as far as his hind end, shoulders and stuff, but it’s a little deceiving because he’s quite a bit taller and, you know, the higher up you go, the more lanky that you look. One thing is for sure, Beach wore 57-inch hopples and this colt’s got a 61-and-a-half, so that’s real.

“Their demeanor is a lot the same. (Beach Glass is) very intelligent and he loves people. He loves attention. He loves walking. He loves the grass. We go in and spoil him, of course, every night and did all winter before he started racing like this and he just waits for us and he’s talking as soon as we come in the door.

“He loves to have his picture taken. He’s a gentleman. He’s a little bit difficult in the winner’s circle, like Beach was.”

MacGrath is the last person to get ahead of himself. For now, Beach Glass is just “a decent colt, so far, and maybe more,” but he likes the positive feedback he’s getting from other horsepeople.

“The same horsemen that very quickly saw Beach for who he was… they are seeing this guy. Who knows how this ends, but they see that he’s a little bit special,” said MacGrath who has the colt at Classy Lane Stables in Ontario. “Ben Wallace said to me the other day, ‘When are you going home?’ and I said, ‘Well, it’ll depend on him. If he stays the way that he is right now, I’m here until the Governor’s Cup.’ He said, ‘Oh, you’re here awhile.’

“He’s a very nice horse and it’s all about now how deep he is and how healthy he can stay. I think he’s got the talent. I think he’s got as much talent as any of the 2-year-olds. He’s not as seasoned as some of them, but that might be a good thing right now.

“I just hope it’s going to be a good story, like Beach.”

Don’t most of us?

In the end, MacGrath is likely correct. The odds of Beach Glass being another Somebeachsomewhere are highly improbable.

But a guy can dream.