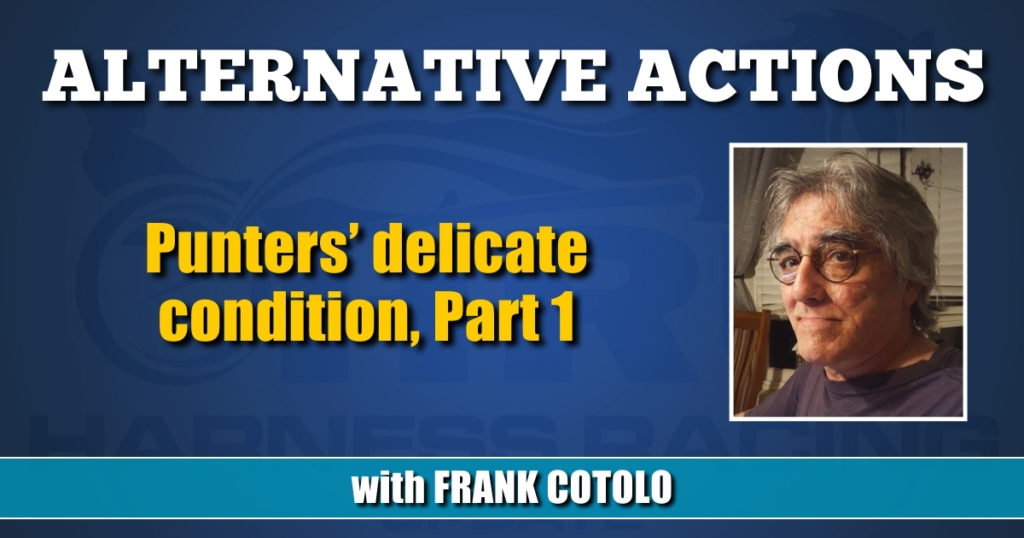 Racing conditions can be entertaining and attractive to prospective and veteran pari-mutuel players if a racing secretary and a creative marketing/public relations secretary become a team that creates sensationalized races — as suggested in this episode of Alternative Actions (AA).

A race secretary works from a traditional, mechanical set of rules in order to write a racetrack’s condition book. He or she is the best judge of which horses are eligible for which races, information used to write competitive contests with full fields. The racing secretary knows more about the local racing community (human and equine) than anyone — except the public relations person. And maybe either is aware of what little impact the written conditions mean to new bettors.

From the first day I set foot on the apron of a racetrack, circa 1960-something, I was told this: “If you want to make any money playing the ponies, read the race conditions first and know what you’re dealing with.” Alright, I said.

Roll forward to 1984. I was in the Arctic Archipelago, in North Saanich, BC, wandering the ill-fated Sandown Park pari-mutuel raceway. A pittance of a thoroughbred meet was in progress. I read this:

Huh? That was it. After nearly two decades of reading such conditions and trying to measure what values they presented to handicappers, I gave up reading thoroughbred conditions. With that stress gone my handicapping actually improved.

Few handicapping chores turned off pari-mutuel bettors in New York City more than the handicapping lesson on conditions, where paragraphs were a pile of numbers, words, semi-colons and phrases like “other than,” “before and after” and “not more than,” causing heavy re-reading on top of a past-performance page. It was a practice not unlike crawling through the pages of a James A. Michener novel.

Early in the 1970s, I realized it was easier to read race conditions at my local harness racetracks. In fact, it was as easy as A B C because some smart Racing Secretary created a system so simple even a New York bettor could breathe a sigh of relief handicapping. How easier can it be? The A with levels, the B with levels, the C with levels; it is perfect.

Then that disappeared, as if some higher power decreed harness handicappers must grow up and handle verbose race conditions like big boys do. Still, harness conditions remained simple.

Anyway, it always appeared to us raceway apron-dwellers that race conditions are far more useful to trainers than to handicappers and so money was lost and won having the least amount of conditions reading, as in harness races, possible because the most important points are the simplest.

AA thought much over the years about the value of using conditions for novelty races, such as PR veteran John Manzi created when he ran the show at Monticello Raceway. These were specialized events with simple conditions, many times concentrated on drivers. John created a race for all African-American drivers; another for Irish-bred drivers (for a St. Patrick’s Day promotion). For equines there was a race for white pacers and various other rules for collecting a field.

AA suggests the racing secretary and the public relations person(s) open their minds to races that can write simple conditions making races novel yet competitive and appealing to bettors; taking Manzi’s ideas one step deeper, combining novel and sometimes outrageous conditions that could attract novice bettors and intrigue veteran punters.

Though AA understands that we do not have the ability to write conditions that appeal to the horseman communities of specific tracks, we sure can get the idea across so a racing secretary and a public relations person understand a fresh process for conditions. Let us say that they could unite like that of a song writing team. The racing secretary writes “the music” and the public relations person writes “the lyrics.” Just as a song writing team works out the melodic and lyrical details, creative conditions can never just be written — they must be re-written, honed and then presented simply.

In part 2 next month AA will provide examples of such efforts and suggest how they may work as promotions for beginners and challenges for punters.