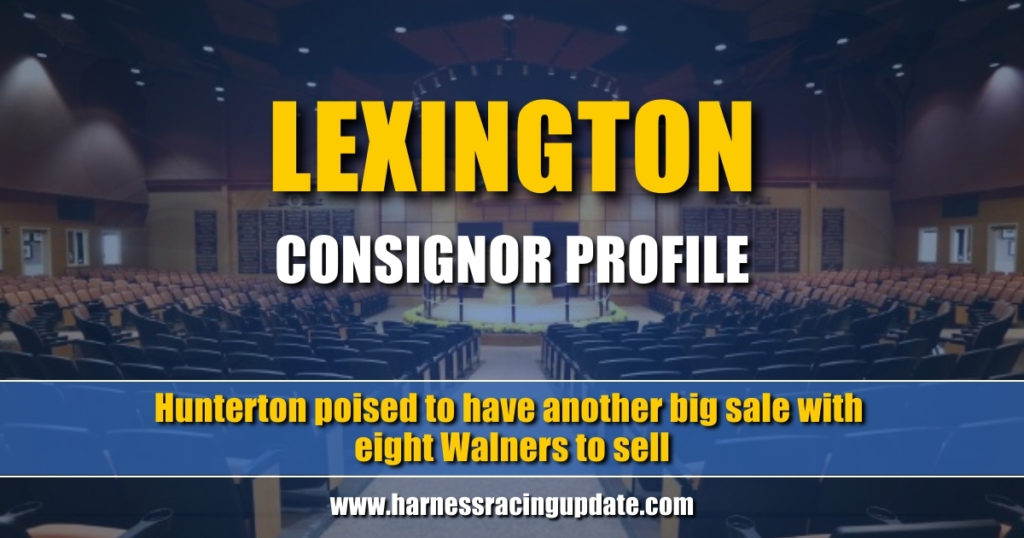 Steve Stewart of Hunterton Farm said the incredible year Walner is having with his first crop of racehorses should prove to be good karma for Hunterton’s prospects at the Lexington Selected Yearling Sale.

“We have eight Walners, so that will bode well no matter what,” Stewart said. “The Walners stand out.”

Hunterton sold the sale topper in 2020 when Kadena, the Walner filly out of Mission Brief, topped the sale at $725,000. This year, Stewart said the Walner sister to Mission Brief, hip 105 Cyberspace, is one of his top picks from Hunterton’s 98-yearling consignment.

“All these people say, ‘I wouldn’t buy a June foal,’ well, (Venerable) is a day or two away from being a June foal, so it’s remarkable that here she is undefeated and vying for Horse of the Year,” Stewart said.

Another Hunterton standout sired by Walner is hip 52 (D’Apper), the first foal out of Breeders Crown winner D’One.

As for non-Walners, Stewart said, “number 49 (Boudicca) is an outstanding Father Patrick filly. The other outstanding one is Muscle Mass’ brother, number 68 (Anointed), Graceful Touch’s colt. He’s really special, too.”

Anointed was sired by Tactical Landing, whose first crop of yearlings is selling this year.

“The Tactical Landings are special for us because we’ve come full circle. We bred him and foaled him and then kept a small piece of him. He sold for $800,000… we’ve had some bad luck and we’ve lost a few Tactical Landings along the way in the first crop, but that happens.”

“525 (Cobble) is a really, really nice Cantab Hall filly. She took a very good video. Also, 380 (Velociraptor), another Father Patrick and probably the last one I would put down is 372 (Snowpiercer), the Muscle Mass out of Wheely Quick.”