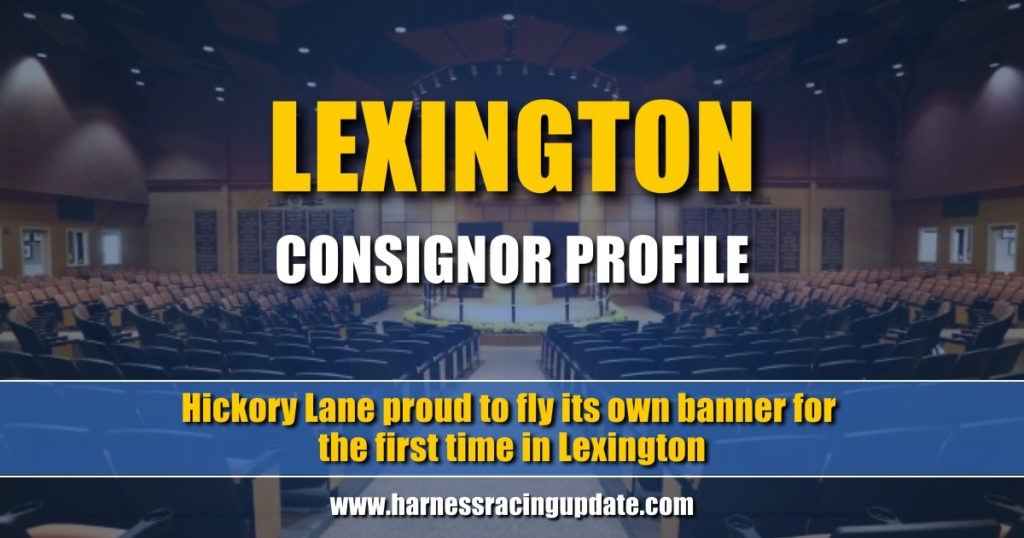 In previous years, Hickory Lane Horse Farm sold yearlings at Lexington as part of the Spring Haven consignment. This year, the Findlay, OH-based breeding operation is selling exclusively under their banner, offering a group of 11 yearlings. Kevin Greenfield, Hickory Lane’s president and treasurer, said that due to the size of the consignment, it was time to change up the plan.

“Being that we have so many to sell this year, we decided to do it on our own,” he said. “This is our first go, but we wanted to bring a nice, good consignment down and I think we have and we’ll try to add on it as each year goes.”

Greenfield is the syndicate manager for first crop sire Tactical Landing, represented by 69 yearlings selling this week. Hickory Lane will offer five from the highly anticipated sire, with a trio that are first foals and at the top of Greenfield’s list as the best of the consignment.

“I think number 132 (Strategic Landing), the first foal out of Southwind Tesla is a nice, athletic colt that is still growing, but the most athletic. Then we have number 173 (Shesundertheradar), a filly out of Barn Diva that’s very fast and very correct. A very good filly; first foal,” he said. “Number 304 (Tactical Decision) is a big, good-looking horse. He looks just like his daddy. Those three Tactical Landings are all first foals and all are a little different, but very, very nice, and we’re real proud of them.”

The syndicate manager is keeping an eye on other Tactical Landing yearlings that will sell this week, and he is excited by what he sees.

“The ones I’ve seen so far are really nice and their videos really stand out. Anybody who has watched their videos can’t help but be impressed. The competition is Walner and Muscle Hill and we’ll see if he’s up to the challenge,” Greenfield said. “I’m excited. He’s an extremely fertile stallion for a trotter. He’s got a lot of yearlings here, and he will for the next three years because he bred full books every year. He was a special horse and I think people know he’s a special horse and I think there’s a lot of excitement for him.”

Also atop Greenfield’s Hickory Lane consignment is a yearling from the second crop of phenomenal first-year sire Downbytheseaside, as well as an offering from Ohio-based sire What The Hill.

“Obviously, one of them in the last day (hip 841 Lioness By The Sea) is a sister to two major winners, Roaring To Go and Queen Of The Pride. In fact, that mare sold the top Downbytheseaside last year, her sister (Sea Lioness), for $200,000,” he said. “We also have a What The Hill filly out of Consolidator (Hip 803 Step N Past Ya). It’s a first foal. This mare made over $500,000, so she’s a highlighter too.”

A past president of the Ohio Harness Horseman’s Association, Greenfield said that Hickory Lane traditionally raises mostly Ohio-bred horses, but with the improvement of the program, there are growing opportunities.

“As you can see the trajectory of the program is going up. With us being in close conjunction to Kentucky, we really have the best of both worlds. The Ohio people can also take their mares down to Kentucky if they want, too. It’s not a very long drive for them,” he said. “The fact is we’ve got better sires. We brought in Downbytheseaside, Fear The Dragon and What The Hill all in one year and those were the top 3-year-olds of the year. That was three years ago. It tells you the program is here, it has been established, it’s going and it’s viable. What I would like to point out is the partnership, working together between the Ohio State Racing Commission and the Ohio Harness Horseman’s Association, they have built this program and allowed it to stay financially very solid. We have a very rich program in Ohio.”

Greenfield pointed to another Tactical Landing colt as his value pick due to his placement in the sale.

“Probably number 503 (Night Landing), the first colt out of Margie. I can see him, being in the third day, that he might be one that would be good value for the money. The mare made $270,000. She’s only had fillies. Her 2-year-old was in the sire stake consolation at Hollywood Dayton (Marge At Large finished third Saturday night). Being the first colt, I think he’s a bit of a sleeper.”