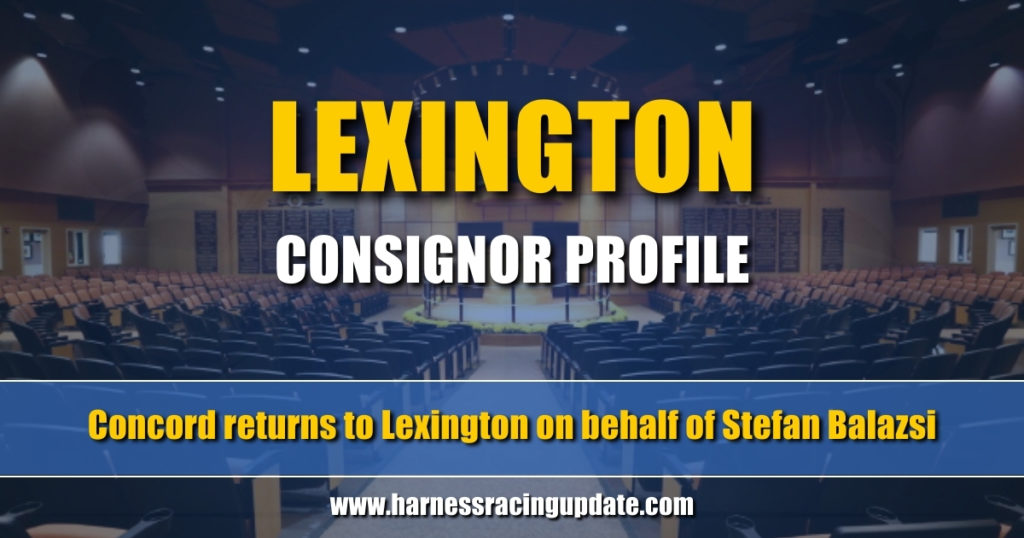 Concord returns to Lexington on behalf of Stefan Balazsi

A year ago, Concord Stud made its debut at the Lexington Selected Yearling Sale on behalf of famed Swedish breeder Stefan Balazsi and topped all consignors by average with $124,357 per yearling for 14 sold.

This year, Concord is back with seven yearlings, six of which were bred by Balazsi, who has split his 2021 yearlings between Lexington and the Standardbred Horse Sales Company’s auction in Harrisburg, PA.

‘We definitely tried to split (up the yearlings),” said Concord’s Julie Meirs. “It was a discussion. Ultimately, the final decision was (Balazsi’s), but he and I spent many hours discussing it and trying to determine who would be best at each sale… We didn’t put all of the top horses at one sale versus another.”

“She’s a full sister to Gimpanzee and Iteration. We’re very excited about her. She’s a nice filly, really well put together. Great attitude on her, so she’s something special,” Meirs said.

“The next one would be hip 60 (Remote Commander), the Chapter Seven colt out of White Cheetah. He’s a really nice colt. He’s really coming into himself. He’s very powerful and very commanding on the floor. We’re really happy with how he’s grown into himself.

“She’s a nice filly from the Lantern Kronos family. There’s plenty of potential there,” Meirs said.

“We can’t forget about the Captaintreacherous filly we have as well (Hip 299, Treacherous Penny). She’s not from (Balazsi), but still a great filly. She’s a big, powerful, first foal, so we’re excited about that pacer.”

Concord is set to sell its yearlings in the first two sessions — five on the first night. Compared to Harrisburg, where it will sell 60, Lexington seems like a breeze to Meirs.

“I wouldn’t necessarily call it a vacation,” Meirs said, laughing, “but it’s definitely a different feel going with seven as opposed to 60. When you’ve got such a powerful group, it’s still exciting and there’s just as much going into it.

“But, it’s true, we’re only selling for two days so that definitely makes it easier. It’s a splash and dash down in Lexington.”