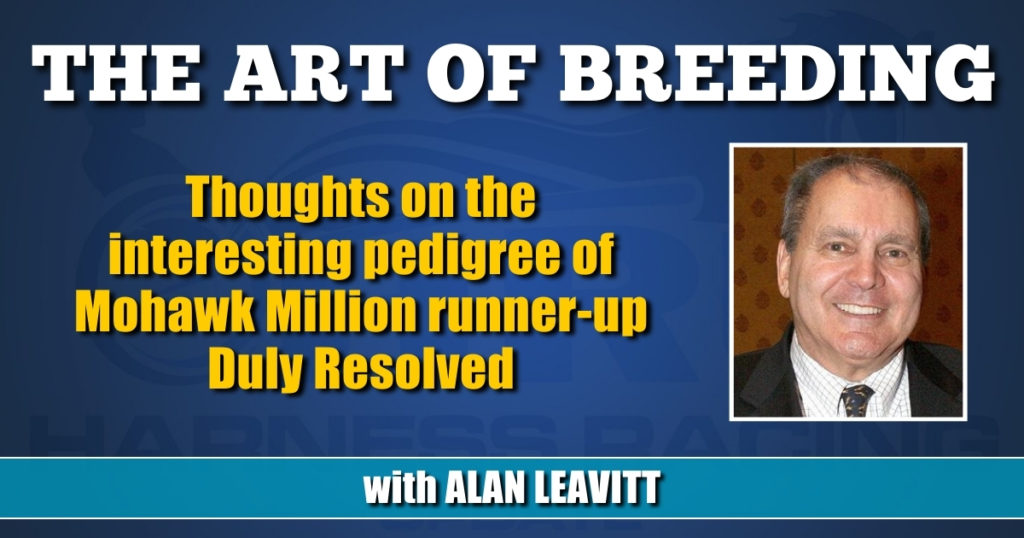 The Mohawk Million million-dollar 2-year-old trot at Woodbine Mohawk Park is an interesting concept. Since the premise of racing for our own money is built into the warp and woof of harness racing, why not race for a million dollars of it?

This year’s edition was a good one. The winner was a truly outstanding filly, Venerable, who was undefeated going into the big race, and stayed that way when they hit the wire. For the record, Venerable is by Walner, and at the risk of being immodest, this kid predicted Walner would be a top sire before any of his progeny had ever raced.

But the horse who caught my eye as far as pedigree is concerned is the colt who finished second by a short head, Duly Resolved. He’s trained by John Bax, a soft-spoken horseman from Ontario who always seems to come up with top trotters. A model of consistency, Duly Resolved has, to date, never finished back of second. His driver is Paul MacDonell, who did a marvelous job of driving Somebeachsomewhere, and can still drive with the best of them. MacDonell is the living proof that one-handed whipping should be universally banned, because no mount of his ever came back with any welts or stripes, and yet they consistently win.

(My remit doesn’t include discussions of drivers, but the three recent arrivals from Down Under, Dexter Dunn, and the McCarthy brothers, are also notable for their good hands and very sparing use of the whip.)

Which makes Duly Resolved 3 x 3 to Muscles Yankee, which makes him inbred to Muscles Yankee. As you’ll remember, whenever the same name appears twice in a pedigree, and the sum of the generations in which it appears is six, or less, that is inbreeding. And inbreeding, as this kid keeps saying, is the best way to produce outstanding racehorses.

But that’s not the whole pedigree story for Duly Resolved. He has Valley Victory twice in his fourth generation, and Wall Street Banker in his third generation. Wall Street Banker is the poor brother of Valley Victory, but he is a full brother, which makes Duly Resolved 3 x 4 x 4 to the two full brothers. Again, being a confirmed pedant, I feel compelled to mention that when the sum of the two generations in which the same name appears is seven or eight, you have line breeding. Obviously, that rule also applies to full brothers.

From his first crop, the only outstanding trotter Resolve has come up with so far is Duly Resolved. The message here is clear as a bell. He needs to be given back the best blood of his dam, i.e. being inbred to Muscles Yankee. That can only happen on a deliberate basis starting with the next breeding season, but in the meantime a smart buyer will grab any Resolve yearling who happens to have a close cross to Muscles Yankee on his or her dam’s side.

Every breeder wants to know how to hit the jackpot. The answer is simple: breed close.

A final note about Duly Resolved, whose ears must be burning by now with all the attention he’s gotten here. Unfortunately, or perhaps not, he’s a gelding. I have no idea who owns his dam, let alone whom he’s been breeding to. But if he ever comes up with a full sister to Duly Resolved, he should hang onto her with both hands, because she is not only a top racing prospect, she also has great potential as a broodmare.

Parenthetically, I find myself obsessively reading and rereading the collected sayings of Dr. Samuel Johnson. His biography, Boswell’s Life of Johnson, was the first great biography, and it was required reading in our upper year at Andover. So much of what he said is still pertinent today.

As two quick examples; he said that “Marriages would in general be as happy, and often more so, if they were all made by the Lord Chancellor, upon a due consideration of characters and circumstances, without the parties having any choice in the matter.”

Considering the high divorce rate of our present society, I couldn’t agree more.

Again on the subject of marriage, he wisely said: “Marriage has many pains, but celibacy has no pleasures.”

So, in closing, I recommend that when you are choosing reading material, choose Boswell’s Life of Johnson, and when you’re doing the matings for your mare, breed them as close as you can.