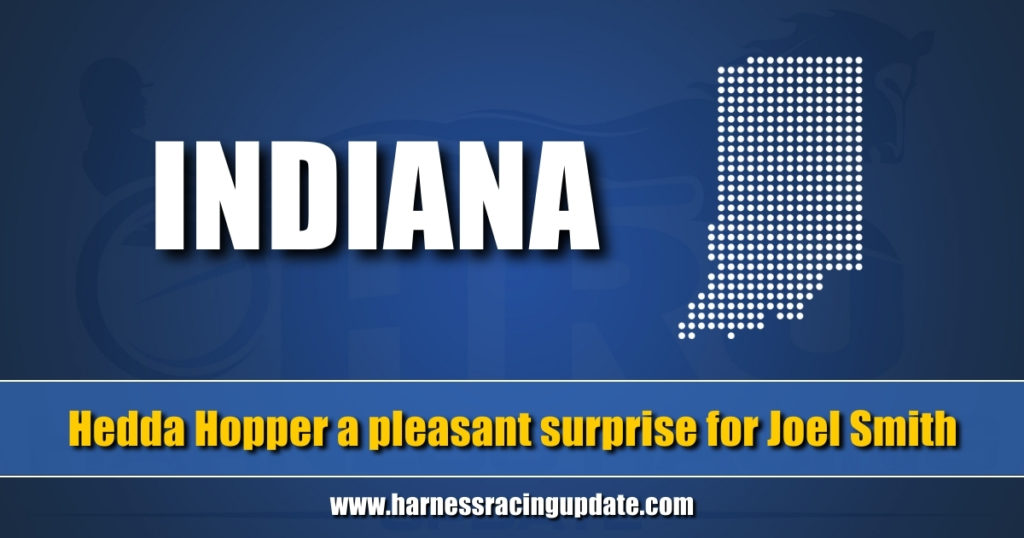 The Tellitlikeitis filly failed to meet the reserve at the Illini Classic Sale last fall, but now sits ninth in her Indiana Sires Stakes division.

When Joel Smith agreed to break and train Hedda Hopper last fall, he had no expectations. But the veteran conditioner now finds himself with a competitive filly owned by a man he has yet to meet and sitting ninth in points heading into the last round of Indiana Sires Stakes competition. The 2-year-old pacer will attempt to secure her place among Super Final starters Wednesday (Oct. 6) at Harrah’s Hoosier Park, competing in one of two $67,500 divisions.

Hedda Hopper passed through the Illini Classic sale ring last fall cataloged as Hip 115 and with the name Light Show. Consigned by breeder Freedom Hill Farms, the Tellitlikeitis—Abriella filly failed to meet the reserve and did not sell. Freedom Hill’s Jim Reynolds reached out to Smith to work with the filly, and the veteran horseman agreed to do just that.

“Jim sent the filly to me to break and train, and in the meantime, he had her online to sell. He called me after I had her about a week and said, ‘I sold that filly,’” he explained. “I ended up keeping her for about a month or month and a half, just getting her broke, and then she went to Pinehurst for the winter.”

New Hampshire resident Elliot Misshula purchased Hedda Hopper online, and when it was time to ship her to Pinehurst, he had a request for Smith. Dabbling for the first time with an Indiana-sired horse and with no local trainer, Misshula asked Smith if he would be willing to race her during the 2021 campaign. He agreed.

“I have talked to the guy several times on the phone, but I’ve never met him,” Smith said. “He seems like a nice person. He’s never had an Indiana bred, and he wanted to try one.”

On the racetrack, Abriella showed a sophomore mark of 1:53.2 with less than $20,000 on her card. As a broodmare, the Bettors Delight mare has shown only one previous starter. So it comes as no surprise that buyers passed on her Tellitlikeitis foal. When she arrived back in Smith’s barn in the spring, the reports from Pinehurst were not glowing.

“Training, they didn’t think she was anything special down in Pinehurst. They said she’d go with everybody, but she never wanted to do anything on the front end,” Smith said. “She was just okay when we got her. The more she went, the better she got.”

In her first two pari-mutuel attempts, Hedda Hopper finished out of the money for driver Mike Oosting. However, in the opening round of sires stakes, the filly registered a fourth-place finish, pacing the mile in 1:54. Oosting has also steered her to a third-place effort in another sires stakes leg. Trace Tetrick, Hoosier Park’s leading driver, has also sat behind the filly. Under his direction, Hedda Hopper has recorded two runner-up performances in ISS action and three victories in overnight competition. The latest triumph came Thursday (Sept. 30) in the $20,000 Nostromo final, with the freshman establishing a new seasonal mark of 1:52.3. She also has a beaten time of 1:51.4 to her credit.

“We keep changing her rigging a little bit and she’s learning how to do it. She’s getting more speed all the time. The biggest trouble I’ve been having is keeping a driver on her,” said the trainer. “Trace has been getting along with her real well, but he’s committed to Erv Miller and Brian Brown, and they have bigger stables than I do. Mike did real well with her when he drove her, so I’ve got no complaints with that either.”

Oosting is listed to drive in Wednesday’s 12th race. Hedda Hopper has drawn post six in a field of eight fillies. The contest is the second of two divisions that will decide the top point earners leading into the $270,000 Super Final, slated for October 15. Currently, the pacer has accumulated 75 points, one more than Ms Quick Sand and 20 more than 11th place Dancin Image. Indiana Sires Stakes victories are good for 51 points in the standings, with 26 points awarded for second and 13 for third. A strong showing and a little luck Wednesday would go a long way in guaranteeing a shot at the lucrative final.

“She’s been competing with these fillies, just hasn’t had real good luck in them. She got stuck on the front end once, been locked in a couple of times. Things haven’t gone perfect for her, but I think she can go right with them,” Smith said.

One of the biggest equipment changes Smith has made with the filly is moving to an open bridle. He said that Hedda Hopper loves to race horses and she has a good attitude, both key factors in a successful season that has yielded $68,295 to date.

“I think that has helped her quite a bit as far as being more aggressive that way. She likes to race horses. If she can see them coming, she’ll race them, usually,” said Smith. “She’s got a good attitude about racing. I just like her attitude. She’s a filly; she’ll pin her ears and bite you and all sorts of good stuff like that. But she really likes to race, she likes to go out there and do it.”