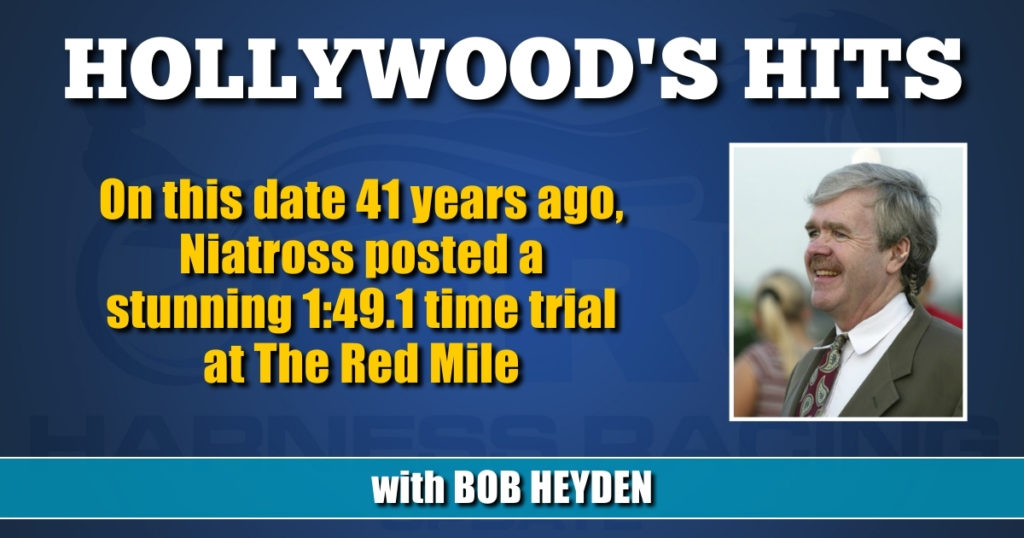 On this date 41 years ago, Niatross posted a stunning 1:49.1 time trial at The Red Mile

Special thanks to Thomas D’Altrui for sending over the program from Niatross’ record-breaking time trial on Oct. 1, 1980.

Niatross was scheduled to time trial the week prior, but at the last moment, in front of 6,000 fans, Clint cancelled and reset the date for Wednesday, Oct. 1, 1980.

There were 231 time trials scheduled and Niatross was #59. He was to go after the seventh race on the nine-race card.

Time trial #85 on the list was none other than Margies Melody, who won in 1:55.4 to beat 1:58.4. You might remember she and Niatross were paired and they produced none other than Nihilator.

Galbraith had a couple of trotters he time trialed before Niatross — Easy Kash after the second and Robert after the third.

Earlier on the card, a two-horse non-betting race won by Overkill in 1:54.4 took place.

Niatross was out to beat not only his own mark of 1:52.4, but the eight-year-old time trial record set over the very same oval by Steady Star — who just so happened to be the most represented stallion on that day’s race card. He also had five in to time trial — including the first, Uplift, and the last, The Booger Lady.

There were four Horse of the Year sires on that day’s card — Bye Bye Byrd, Albatross, Speedy Scot and Nevele Pride

Toy Poodle won for the 14th time at age 3 — in a new lifetime mark of 1:53.4 — as the fastest time of the day on the race card. James Michael of Bucyrus, OH owned the sophomore daughter of Most Happy Fella who improved to 22 14-4-1 $184G on the season for Billy Herman.

Oscar Bowden, 71, was the oldest participant-winning one of the two divisions of the “Gentlemens Driving Club” events.

Some other notables who either did time trial that week or were scheduled to were:

The program listed 231 of the scheduled time trials (although there were add-ons). Twenty-six of those were to be handled by none other than Joe O’Brien, the master of the time trial. Remember he was 63 then.

It was eight years to the day of Steady Star’s prior mark of 1:52 flat. Many forget that it was the very next day in 1971 that Albatross — Niatross’ sire — won the Tattersalls in 1:54.4 twice, despite starting from the 12 post in the opener and in the second heat starting slowly from the rail and encountering a  parade of leaves flying into his face turning for home. He was the first ever sub-1:55 race-winning 3-year-old and he did it twice.

As for Niatross, after his time trial it would be 10 days to his next race, the Messenger, when he went to Roosevelt and completed the Triple Crown.

Niatross would then go to the Meadowlands (Oct. 16) with thoroughbred Spectacular Bid to be showcased for the crowd. Both were Horses of the year, although Spectacular Bid’s season was done. Niatross’ was not.

Some numbers in the Mohawk Million card aftermath

Steve Stewart may already have his Mohawk Million slot for 2022 having bred the first two winners — Venerate and Venerable.

Dial 9-11? No need. Venerable and Monte Miki overcame those posts, respectively, to win the two richest races on the card.

Never in any prior trotting million-dollar race had the two oldest drivers finish 1-2, but that happened when Miller, 56, was first and Paul MacDonell, 57, was second.

As for Mohawk Million winner Venerable, who is a perfect eight-for-eight, a 2-year-old trotting filly has never been named Horse of the Year.