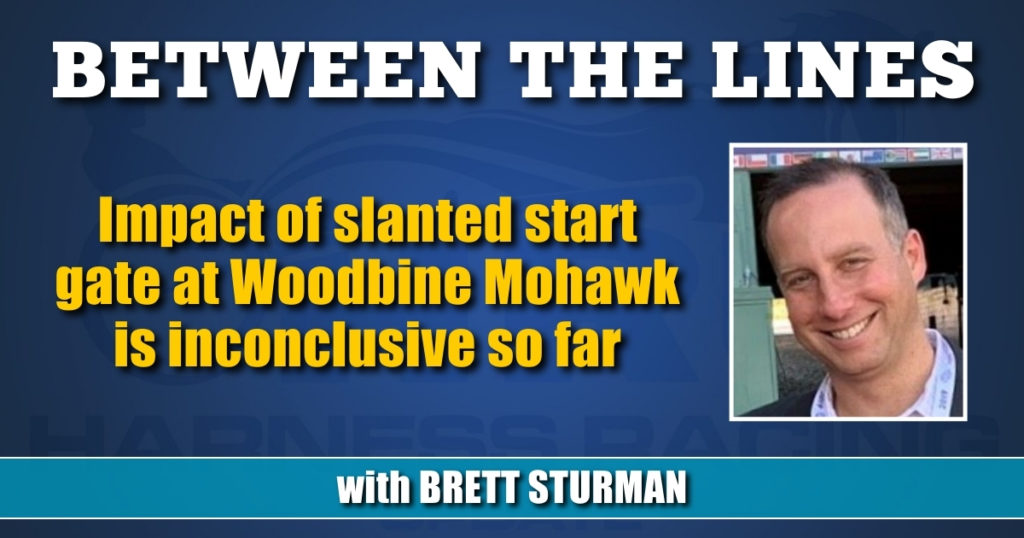 When racing resumed at Woodbine Mohawk Park in June following its latest pause due to government-imposed restrictions, the track did so with the adaptation of a new starting gate. More specifically, what’s known as a slanted, or staggered starting gate.

The motivating factors behind the slanted starting gate were two-fold. One, the new starting gate would allow for all horses to be on the gate in a 10-horse field, a change from prior where the horse in post-10 would start as a trailer in the second tier. The other reason specific to the slanted start, was to attempt to level the chances of those horses starting from the outside posts.

Designed and built by Ohio-based Mike Woebkenberg, the slanted starting gate extends nine feet between the first starting slot on the gate and the 10th. Beginning from the first to the second slot, each increment is one foot apart and extends to the 10th spot on the gate.

From June 11 through the super month of racing in September (can we start calling it Super September?) that just concluded at Woodbine Mohawk, what do the actual numbers bear out? I went into this exercise with the assumption that the outside posts would show clear improvements and gains in winning since each post is beginning with at least a one-foot advantage from prior (or multiple feet if horses directly inside aren’t leaving), but the findings were more mixed.

On the weekend of June 11-12, things certainly were off and running. Those two nights each saw multiple post-10 horses win, some at huge prices. Even after the first two weeks through June 25, post 10 was winning on the pace at an astounding 19.4 per cent! From there, however, the numbers would come back to reality.

Specific to the pacing statistics where there were more races in the data set than on the trot, between last November through this April where a traditional starting gate was used and post 10 was a second-tier trailer, posts 1 through 4 produced similar results, all winning at 10-11 per cent. Posts 5 and 6 were the standouts, winning at 15 and 17 per cent, respectively. Going out further, the win percentages decreased to where the outside post 9 posted a winning clip of 8.5 per cent.

Still on the pacing side and now looking at results with the slanted starting gate used June through September, post 1 won at just 8 per cent, down from 10.5 per cent prior. Posts 2 through 6 posted results comparable enough to prior starting gate, though posts 7 and 8 were where more noticeable gains were seen. Post 7 saw a 2 per cent gain in win rate and post 8 increased from 7.9 per cent to 10.4 per cent. Post 9 won only at 4.7 per cent with the new gate presumably due to lower quality horses with that post in a smaller data sample, though post 10 won at 8.1 per cent, essentially the same as what the outside post 9 produced with the prior gate.

Findings on the trot side are similar. Post 1 actually shows an increase in win percentage from prior, though posts 2 and 3 show sharp declines. Those declines were offset by large increases in the win percentages between posts 4 and 6. The rest of the posts aren’t as reliable to measure due to the fewer full fields on the trot, on top of fewer trot races than pacing races to start with.

So, what’s to make of all these numbers and percentages?

For starters, the changes aren’t particularly dramatic overall, but they do point to a trend one might expect where post 1 is the most adversely affected post by the slanted gate, starting anywhere from one to nine feet behind the rest of the competition. To make better sense of what’s happening in practical terms, I turned to a WEG resident expert who wished to remain anonymous to get his take.

Not surprised by what the numbers show, he said, “The inside has to hustle to get away into an early striking spot, and many are being buried sixth or worse. The outside still has to hustle too, and it seems like they give cover to the 5, 6 and 7 horses that would not be leaving without seeing some possible cover or hole created by the movement.

“My favorite post is 6 right now. With a little effort you get away fourth or fifth, which used to be what the inside three horses would benefit from the mid-gate leavers. Some people won’t play trotters from the rail and now it’s worse.”

He also notes that many superfectas are populated 4 through 8, and surmises that the slanted gate has eliminated any favorability of drawing the rail and at the same time only helping the outside posts minimally.

If you believe the statistics or agree with the observations, what are some of the reasons for only the subtle changes? Perhaps part of that is because of the relatively long straight away until the first turn on the 7/8th mile track configuration is that there’s still plenty of time for horses to sort themselves out as they normally would. And most opening quarters still seem right on par with what they were before, suggesting that there’s not an all-out effort to outsprint others off the gate; at least no more-so than prior.

Of course, the gate itself is just one component of a race, and both driver and horse are responsible for their parts too. In addition to building the gate, Woebkenberg also is the starter for an estimated 3,800 races a year between pari-mutuel races and fairs, including the Little Brown Jug. Woebkenberg says, “I personally believe that the starter is a partner with every horse and every driver at the start. I believe there are more races won and lost behind the gate that are ever won at the finish line.”