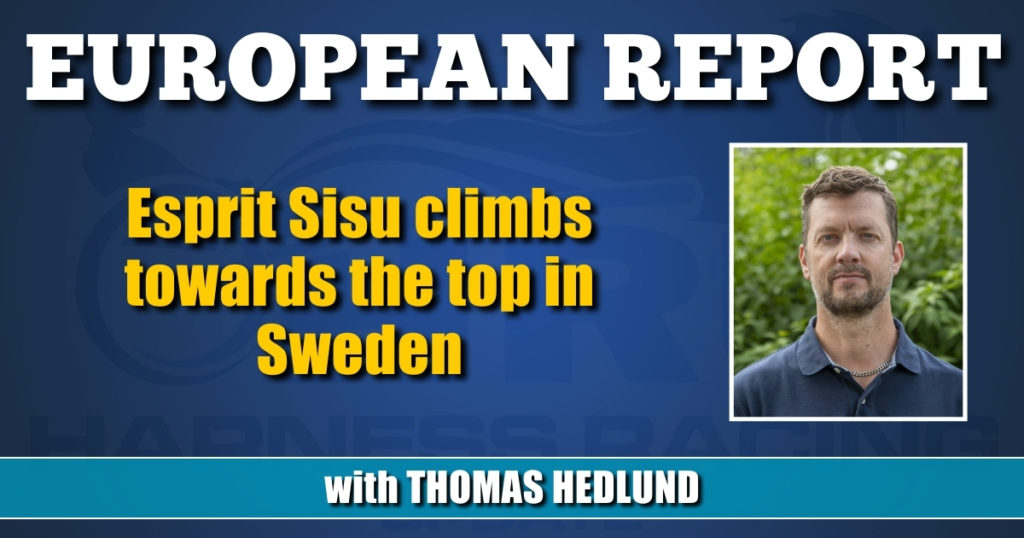 Esprit Sisu climbs towards the top in Sweden

The $172,000 STL Open final was on Solvalla’s Sunday (Sep. 26) race card and several of the most successful trotters in gold division in V75 during the year were gathered over 1.3 miles.

Very Kronos, Milligan’s School, Milliondollarrhyme and Cyber Lane were just some of the merited trotters that tried to catch the STL Open trophy and the story became quite entertaining with Cyber Lane in the lead and Very Kronos in position first over.

The pace was set high and in second over, Daniel Wäjersten had placed his Esprit Sisu (Ready Cash). The 7-year-old gelding has developed a lot during the season and when Very Kronos got advantage over leader Cyber Lane in the last turn, Daniel Wäjersten had a lot of power left in his horse. Esprit Sisu fought well over the stretch and won in strong mile rate 1:53.4 over 1.3 miles. Milliondollarrhyme finished tremendously far outside and hit the wire as runner up, close before a brave Very Kronos.

On the same race card, two eliminations for $465,000 European Derby for 4-year-olds were held and Swedish Derby winner, still undefeated Calgary Games (Readly Express) dominated the first race for driver Jorma Kontio. Calgary Games claimed his eighth consecutive win in mile rate 1:56 over 1.3 miles and it was also announced that the horse has a new part owner. Margareta Wallenius-Kleberg, Menhammar Stuteri, has bought a part in Timo Nurmos trotter and it’s obvious that Calgary Games will work as a stud beside his racing career next year.

In the second elimination, Björn Goop’s San Moteur impressed from the lead in mile rate 1:56.1.

Later that day, one elimination was held at Vincennes in Paris and that race contained only seven horses. Eric Raffin drove Jean-Michel Baudouin trained Hirondelle Sibey (Gazoullis) and opted position first over as Wild West Diamant got fired up in the lead. In the last turn, Raffin had control over the race and Hirondelle Sibey cruised to safe win in mile rate 1:54 over 1.3 miles.

The final of the European Derby is scheduled at Åby racetrack in Sweden on Oct. 9.

The $180,000 Gran Premio Continentale for 4-year-old trotters was held in Bologna, Italy on Sunday (Sep. 26) afternoon and heavy favorite Bepi Bi went off stride in hunt for the lead at an early stage of the race.

French trotter Hooker Berry hit the lead and Enrico Bellei put his filly Birba Caf (Orlando Vici) outside the leader in the 1.3 miles long race. Bologna offers a half mile track and Bellei’s choice of tactic proved to be the right one since Birba Caf easily disarmed leader Hooker Berry in the last turn and then held the rest of the gang behind her in mile rate 2:00.3.