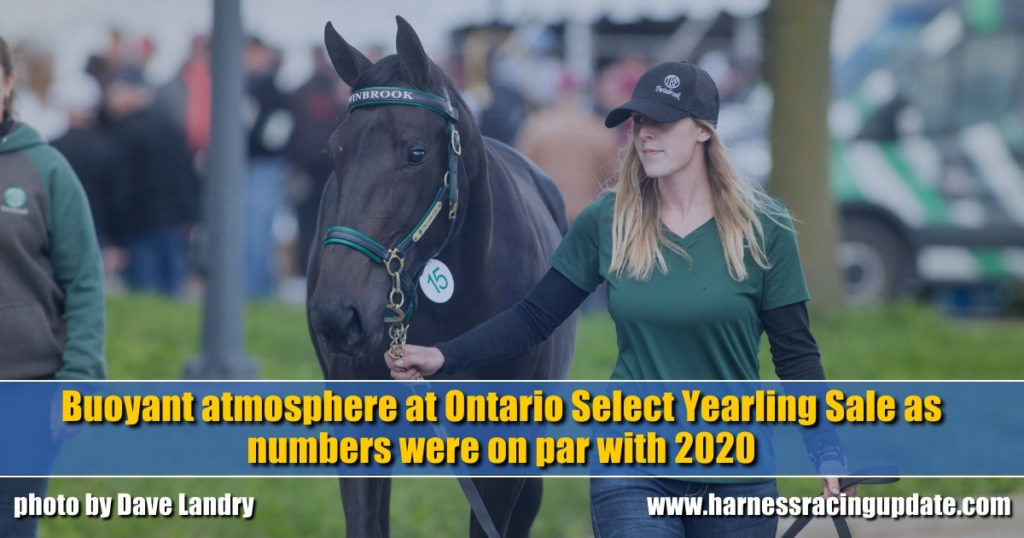 The second edition of the Ontario Select Yearling Sale — held Sunday (Sept. 26) at Winbak Ontario’s location in Inglewood, ON — produced similar results compared to the 2020 auction, but the atmosphere was a noticeable improvement compared to a year ago when COVID-19 restrictions kept human interactions to a minimum.

“The best part of my day (Sunday) was just seeing all the people out laughing, talking. A lot of people haven’t seen each other since the last time there was a live sale somewhere, so it was great to see,” said sale manager Pat Woods, Winbak Farm of Canada’s manager. “It almost felt that things were back to normal, you know, people were smiling and happy. For us, it was a great feeling that we could provide that atmosphere and buzz around the industry.

“It was, kind of, back to normal-sized crowds. We weren’t limited being an outdoor event. As long as we had enough room to social distance, then we weren’t restricted to a number. Only inside the tent, which the limit was 400 inside the tent and… there might have been 200 in there at any given time.”

“We believe that having both virtual and in-person options for bidding allowed people to choose their personal best option,” Woods said, adding he was happy the sale was essentially on par with last year.

“We felt the nice horses, we were rewarded on and the average… that’s what we’d hoped for and it definitely met our expectations,” he said.

Topping the sale was hip #15 Muscling Vegas, a Muscle Mass filly out of Vegas Virgin purchased for $75,000 by Christopher Storms of Picton, ON.

The top trotter sold was hip #102 Extreme Force, a Bettors Delight colt out of Mystic Dance that was sold for $72,000 to Sylvain Descheneaux of Quebec, who led all buyers by spending $144,000, total, to purchase three yearlings.

Both Muscling Vegas and Extreme Force were consigned by Twinbrook Farms, who led all consignors in average. Twinbrook grossed $313,000 for seven yearlings sold, averaging $44,714.

“Twinbrook has always supported Winbak and they are friends, as well,” Woods said. “Tammy and Rob (McNiven) run a top-notch farm and they breed nice horses. When they show up here, they look good. I’m not shocked in the least that they sell some high-priced talent. They did it last year and they’ve done it again this year. They bring nice horses to our sale and we love having them here.”

“He was a really nice, big, strong-looking individual,” Woods said. “When he would come out, people would be, like, ‘Oh, who is that?’ A lot of people came to look at him. The mare has been very successful as a broodmare. She has a nice 2-year-old Shadow Play (named Flo) that Ian Moore trains that’s been racing in the (Ontario Sires Stakes) Golds and done well. Because the mare has produced, people weren’t afraid to buy something and spend a little bit of money.”

Woods added that Winbak is thrilled to be standing Shadow Play, who is having an outstanding year.

“Even Saturday night in the Golds, they finished 1-2-3. That’s pretty much been the trend all year and they are missing Lawless Shadow right now due to his injury. It’s just been unbelievable. Desperate Man winning the North America Cup, especially because he’s a Winbak-bred has brought more people in to look at the Winbak Shadow Plays and I think that’s why he commanded the price he did,” Woods said.

“Dave Reid is probably the best in the business at consigning horses,” Woods said. “He’s world-class with everything that Preferred does at any sale. They’ve always been a big supporter. Dave Reid and (Winbak owner) Joe (Thomson) have been good friends and they help each other out whenever we can. They are great to be here. They bring in quality people. Their horses look good and they run a professional operation… Up here, Steve Bray runs (Preferred’s) operation and he’s so great to deal with. There’s never an issue, never a problem and always willing to help out at any cost.”

As for Thomson, he came up from Pennsylvania for the sale. Winbak’s yearling manager Jimmy Ladwig and head trainer Jeff Fout were also present.

“It was great that Joe was able to attend, as well as our yearling manager Jim, this year. That’s fantastic and people were happy to see them back up here for the sale after missing last year due to the restrictions with the border. Our racehorse manager, Jeff Fout, got to come up and talk to a bunch of our trainers and everything as well. That was a great addition to the team up here,” Woods said.

Thomson even pitched in to help show a yearling when it was particularly busy just before the sale.

“There were horses everywhere with people looking. It was a big crowd and all the girls had horses out and Joe was the only one to see it, so he went and grabbed a horse himself and brought it out to show someone,” Woods said. “That’s the thing, he’s not afraid to do the job himself. He’s out here selling horses.”