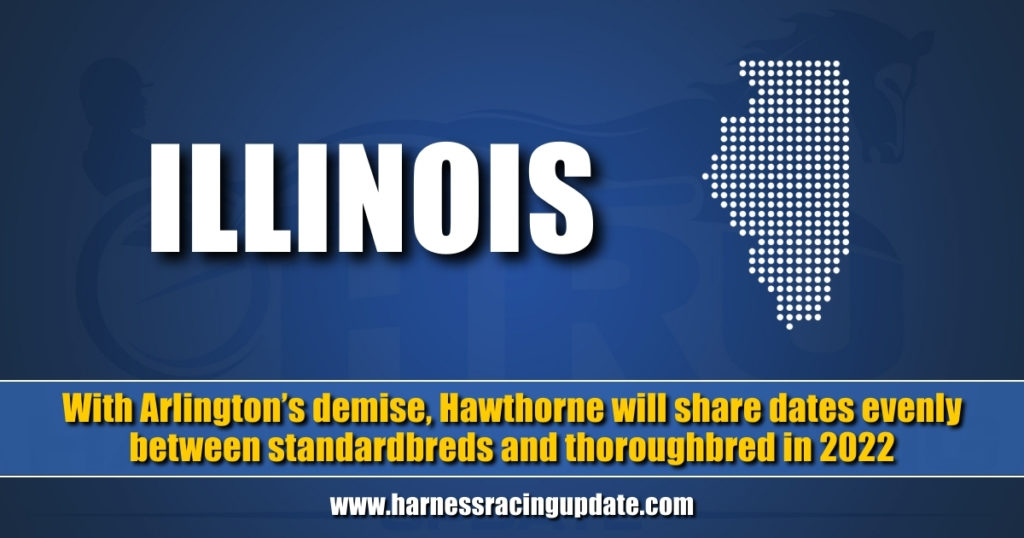 With Arlington’s demise, Hawthorne will share dates evenly between standardbreds and thoroughbred in 2022

Horse racing in Chicago next year will feature a 75-date harness program and 76-date thoroughbred calendar split into four segments.

When the Arlington thoroughbred meet that left the starting gate on April 30 reaches the finish line on Saturday (Sept. 25) it will mark the termination of racing at the tradition-rich 94-year-old Chicagoland sports showcase that Architectural Digest has described as “world’s most beautiful racetrack.”

Corporate owner, Churchill Downs, Inc. (CDI), is selling the 326-acre property for redevelopment, much to the dismay of racing fans in the Chicago metropolitan area and the owners, trainers, jockeys and backstretch workers who have come to consider Arlington their home track.

That decision has left Hawthorne as the only racetrack in the metropolitan area and the members of the harness and thoroughbred communities in a no-win situation, struggling to survive while they await the completion of construction of a casino at the track and the hoped for establishment of a new harness track in the south suburbs.

“Over the last three months we’ve been working with Hawthorne and the thoroughbred horsemen to come up with an amicable schedule,” IHHA executive director Tony Somone told the board at Thursday’s (Sept. 23) dates hearings that prefaced the announcement of the schedule. “It was work; it was contentious at times. But we eventually succeeded and we’ve got light at the end of the tunnel.”

Passed by a 7-0 vote, the schedule is spread over the entire calendar year. It calls for 75 harness programs and 76 thoroughbred programs and it is split into four segments.

The racing year will begin with harness racing from Jan. 7 through March 20.

Then, the thoroughbreds will take over the track for a meeting that runs from April 2 through June 25.

The harness horses will return on July 1 and will remain through Sept. 11.

Concluding the racing year will be a Sept. 23-Dec. 31 thoroughbred meeting.

“To be frank it’s not the most profitable schedule for Hawthorne but it is the best for an industry in transition,” said Hawthorne president Tim Carey. “The schedule has been crafted to support the entire industry. We will be flipping the track (to change the racing surface) four times.

“Obviously, we are in an unprecedented situation. Never in the history of Chicago racing has only one track operated.”

Pari-mutuel harness racing in Illinois was inaugurated at now defunct Maywood Park in 1946 and Hawthorne added the sport in 1970, making it the Chicago market’s sixth sulky venue at the time.

But, eventually the other tracks began to disappear and in 2016 Hawthorne became the only standardbred game in town after Balmoral Park and Maywood went out of business late the previous year.

Since then the harness meeting has been bookended by thoroughbred meetings in spring and fall.

This year’s 63-night harness meeting began May 7 and ends Sunday night. The thoroughbreds, meanwhile, are racing a 53-day schedule consisting of a March 6-April 25 meeting and an Oct. 1-Dec. 31 meeting.

Carey said that during the course of his discussions with Somone and IHHA president Marty Engel and ITHA president Mike Campbell and executive director Dave McCaffrey they established three priorities: 1, maximizing opportunities for both breeds; 2, preserving the Illinois-bred stakes program for harness horses; 3, maximizing grass racing for thoroughbred horsemen.

“And while all of this is happening (racino) construction will continue,” Carey said.

The target date for completion of the $4 million project is early next fall.

“This isn’t a mere remodeling,” emphasized Carey.  “It’s a total rebuilding. We are building a premier entertainment and gaming destination. We are remaking the entire experience of being at Hawthorne for both the fans and the horsemen.”

A massive 2019 gambling expansion bill that passed the Illinois legislature and was signed by Gov. J.B. Pritzger made it possible for the state’s three tracks — Hawthorne, Arlington and Fairmount Park (which conducts a thoroughbred meeting in downstate Collinsville) — to add casino gambling with a portion of the revenue earmarked for purses and track improvements.

For nearly 30 years the tracks and horsemen had been urging the legislature to let them have casino gambling, an innovation that has revitalized racing in other states, and Arlington was in the forefront of the push.

When, at long last, approval came, Hawthorne and Fairmount immediately began making plans to convert themselves into racinos (combination racetracks and casinos), but shockingly Bill Carstanjen, the chief executive of Arlington’s parent company, CDI, in effect said, “No, thank you.”

“The long-term solution is not Arlington Park,” Carstanjen announced in the summer of 2020. “The land will have higher and better purposes for something at some point.”

Although no one in the CDI hierarchy will admit it, the obvious reason is to eliminate competition for another of its holdings, the Rivers Casino, located about 20 minutes from Arlington by car. Soon after Rush Street Gaming opened Rivers in 2011 it became the state’s most profitable casino and in 2019 CDI — which has recent years has made its racetrack interests subordinate to its casino gambling pursuits — bought a 62 per cent interest.

According to an anti-trust complaint filed with the Illinois attorney general’s office by the ITHA, CDI has turned down a $200 million offer for Arlington and its right to acquire a casino license.

When bidding on Arlington closed in June, CDI announced “numerous parties have made offers.” Two days later, the Chicago Bears of the National Football League confirmed reports that they were among the bidders and five days thereafter the Bears announced a deal with Rivers Casino to make its digital arm, BetRivers, the team’s exclusive sportsbook and casino partner.

Thus, it would appear that the Bears are the most likely of the bidders to be take over the property.

In addition to permitting tracks to reinvent themselves as racinos and Chicago’s major sports teams and racetracks to operate sportsbooks, the 2019 legislation called for a new harness track/casino to be located in one of six townships in south suburban Chicago.

Later in 2019, real estate developer and video gaming magnate Rick Heidner disclosed that he was making arrangements to build a state-of-the-art racino in the village of Tinley Park and at that year’s dates hearings the Racing Board tentatively approved his application for a Dec. 6-29 harness meeting.

But the deal fell through and the dates were revoked because of a disclosure that Heidner had business ties to a banking family with alleged organized crime connections.

Since then, there have been no reports of a prospective builder, much to the dismay of both the harness and thoroughbred horsemen.

“A second track in Chicago is so important for both breeds,” stressed McCaffrey, who was the IHHA president and a successful harness driver before becoming the ITHA’s executive director. “With Arlington’s absence the importance of that track cannot be overstated.”

McCaffrey also emphasized “the critical role” that off-track betting locations play and told the board “they need to stay open” (under the auspices of Hawthorne now that Arlington is leaving racing).

Racing Board member Alan Henry has been a persistent critic of CDI’s decision to close Arlington and in the commissioner’s comment segment of the meeting at which the schedule was announced he again denounced the parent company.

“I will tell you that it dismays me to have to vote in favor of the 2022 racing dates that were reluctantly put before us today,” he said in part. “I am well aware that it was the least bad option. I also know that if this becomes the new normal in Illinois, we are on the road to the suffocation of an entire industry.

“The fault for this deformed calendar — most of it — belongs to Churchill Downs Inc. Their decision to permanently close Arlington Park and then not apply for 2022 racing dates as a placeholder, even while one of the groups still alive in the budding process wants to keep the track open, has been a masterwork of corporate single-mindedness.

“With uncanny tone-deafness, the track’s brass are touting the end of nearly a century of racing at Arlington Park on Saturday as a ‘celebration.’ I’d say Daily-Herald columnist Jim O’Donnell more accurately pegs it as a ‘hollow charade’ and a “vile final goodbye.’”