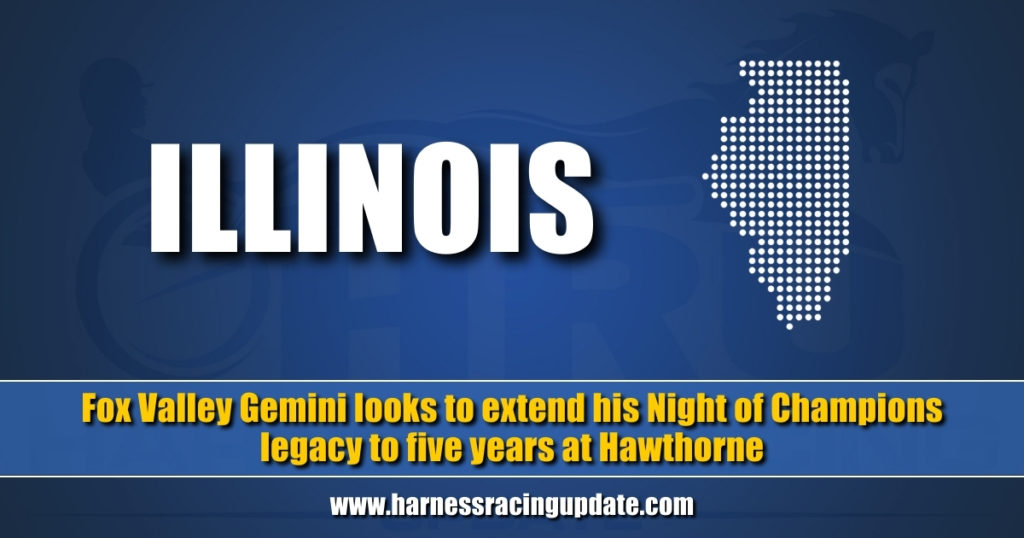 Can Fox Valley Gemini extend his unprecedented Night of Champions winning streak to five consecutive years or will He’zzz A Wise Guy make it three years in a row?

That’s one of the many story lines for the main event in Illinois racing scheduled for Saturday night (Sept. 25) at Hawthorne Racecourse.

Both pacers will be competing in the $64,000 Robert S. Molaro Memorial for older males, one of 11 Illinois-bred championship races on a program that offers an aggregate pot of $1,009,500.

Fox Valley Gemini, a 6-year-old gelding owned by Jim Ballinger, trained by Terry Leonard and driven by his son, Casey Leonard, will be in quest of his third victory in a row in the Molaro after capturing the Robert F. Carey Memorial for 3-year-old colts and geldings in 2018 and the Incredible Finale for 2-year-old males in 2017.

Last year, Fox Valley Gemini went into the Molaro with a four-race winning streak, but this year he has finished second in his last four starts following a victory at the State Fair in Springfield on Aug. 14.

“He’s had a good year (five firsts and eight seconds in 15 starts) but lately he’s had a bad case of seconditis,” Casey said.

“He’zz A Wise Guy is awfully tough; I’m glad we drew inside of him. We going to give it our best shot.”

The 4-year-old He’zzz A Wise Guy drew the No. 7 starting slot, while Fox Valley Gemini drew No. 6 in the field of eight.

Like Fox Valley Gemini, He’zzz A Wise Guy is a son of Yankee Skyscraper and he too won the Incredible Finale at age 2 and the Carey Memorial at 3 (en route to being crowned Illinois Horse of the Year).

He is owned by Triple Zzz Stable and trained by his breeder, John Filomeno (in partnership with Joann Filomeno). At the reins will be Kyle Wilfong, who is second to Leonard in the Hawthorne driver standings.

In winning his Molaro elimination race by 2 ¾ lengths over Fox Valley Gemini, He’zzz A Wise Guy led all the way. That triumph gave him a 2021 composite consisting of 8 wins, 3 places and 6 shows in 19 starts for earnings of $95,650.

The previous week He’zzz A Wise Guy finished an out-of-character and inexplicable sixth in an open pace at Hawthorne.

“He just wasn’t himself,” Wilfong said, “(but) in his last start he was ready to rock. I’d have to assume he’s ready to rock again.”

Although it pits the two marquee horses, the purse for the Molaro is the smallest of the night.

The richest race is the $138,000 Incredible Finale. This one looks like a duel involving Fox Valley Ozzy and Get E Up.

Casey Leonard drives Fox Valley Ozzy for owners Steven A McMacKin and David Lee Samuelson and trainer Gary Rath, while Get E Up is co-owned by driver/trainer Kyle Husted (in partnership with David J. Brigham and John Schwartz).

“He has been great,” Leonard raved in critiquing a 2-year-old campaign that has seen Fox Valley Ozzy record seven triumphs and two places in nine races. “Gary has done a great job of training him. Since Day 1 he has been racing like an older horse and he has never been sharper.

“His post position (No. 8) isn’t great but I think he has enough speed to overcome it.

“Kyle’s horse (Get E Up, starting from post 6) is right there with him—they’ve been 1-2 in their division all year and it’ll kind of depend on the trip.”

Trainer Steve Searle will have Leonard in the sulky when he sends out Loulita in her attempt to become a Night of Champions winner for the second time in as many years. After taking the Fox Valley Flan for 2-year-old filly trotters last year, Loulita now is competing in the $68,500 Beulah Dygert Memorial for 3-year-old fillies.

To accomplish that feat it appears that Loulita will have to get the best of Breeze at Sunset, who has won seven of her 13 starts for trainer Erv Miller and driver Atlee Bender.

Loulita’s 15-race record of seven victories, five seconds and a third compares favorably and in their elimination she stalked Breeze at Sunset throughout the second half of the race in coming within a neck.

“Later this year we were getting caught out front quite a bit so we kind of rethought our strategy and last time she finished with a lot of trot,” Leonard said of Loulita.

“Erv and Atlee have done a nice job with Breeze At Sunset and that’s the filly to beat. But she didn’t draw very well (outside in a field of seven) and hopefully we can get a good trip (from the No. 3 slot).”

Wilfong, Willis and Annas Lucky Star look like the winning combination in the $68,500 Plesac Trot for 3-year-olds and up of both sexes.

Annas Lucky Star is one of four mares competing against six makes,

“She’s not afraid to race against the boys,” Wilfong said, citing her past success.

Exhibit A is her elimination race in which she led all the way in prevailing by 3/4ths of a length.

Numbered among Saturday’s male adversaries is defending champion Lousraptor. The 5-year-old gelding–bred and owned by Flacco Family Farms, trained by Searle and driven by Juan Franco–will be trying to snap out of a slump that has seen him finish out of the mutuel money in his last three outings and he will have to overcome the No. 10 starting slot.

Bootsy Bombay, upset winner of last year’s Incredible Tillie for 2-year-old filly pacers, finds herself in a similar situation in the $76,000 Plum Peachy for 3-year-old fillies. She is winless in 11 starts and has finished second only once for owner James Greer and trainer Nick Prather. In last year’s race Bootsy Bombay was driven by Travis Seekman but now Husted is her regular reinsman.

Although she will have to overcome the No. 9 post position in a field of 10, Hart’s Heart looks like the miss with the most class in the race. In her last four races at Springfield, DuQuoin and Hawthorne, she boasts three wins and a second.

The elimination was the most impressive of those outings for trainer Mike Brink and owner/breeders Donna Crebs and Judy Conzo—crushing the competition she won by 5 lengths with Wilfong in the sulky.

“She’s been tough all year,” Wilfong said. “She has done it on the front end and she can come from the back. The 9-hole (in a 10-horse race) doesn’t concern me. I truly believe she is the best horse in the class.”

A pair of 2020 champions can be found in the $66,400 Tony Maurello Memorial for aged mares—defending champion Allbeastnobeauty and Plum Peachy heroine Fox Valley Exploit.

The 4-year-old Fox Valley Exploit has three triumphs and a nose loss to show for her last five starts for Husted, her driver/trainer/co-owner (with David Brigham), while the 6-year-old Allbeastnobeauty emerged from a mild slump to lead all the way in winning her elimination for driver/trainer Todd Warren and owners Brookside Stables and Keith Ravis

Another 2020 champion is Fistfullofdollars, winner of the Kadabra for 2-year-old colt and gelding trotters. He will try for an encore in the $97,500 Erwin Dygert Memorial for 3-year-old males but the odds appear to be stacked sky-high against him. A third is his best effort in 13 starts this year and he will have to overcome the outside post position in the 10-horse race.

Sumbodygetdisfool has been a workaholic on the fair circuit and his 24-race past performance sheet shows 9 wins, 5 places and 4 shows and $62,769 for owner Laquinton Shavers and trainer Roshun Trigg. At Hawthorne this month, with Todd Warren in the bike, the gelding rebounded from a fourth place finish to impressively win his Erwin Dygert elimination race.

In the $79,000 Robert F. Carey Jr. Memorial for 3-year-old colt and gelding pacers, Casey and Terry Leonard appear to have the best horse in Ideal Big Guy. He has vital statistics of 4 victories, 1 second and 4 thirds in 12 races this year and his bankroll of $58,780 is by far the biggest in the 10-horse test.

“We bought him as a yearling with a group of our owners,” recalled Casey. “We knew that year was kind of an all-time low in numbers (of Illinois yearlings) so we tried to find one that we liked. He has turned out to be a pretty decent horse. I think if he can win this he can lock up divisional honors.”

The $120,500 Fox Valley Flan Trot is the second richest race on the card and Funky Wiggle is the most precocious member of the 2-year-old freshman filly class. With Wilfong doing the driving, she flaunts 7 wins and 3 places in 11 races for owner Dr. Patrick Graham and trainer Curt Grummel and she boasts a five-race winning streak.

“She definitely has been on her A game the whole time,” Wilfong said. “Curt has done a great job. He handed the lines over to me and all I had to do was put her in the right spot.

“The last time she got beat (second by a 4-length margin at Springfield in mid-August) the track was very wet and, on top of that, the race was delayed. It was a case of take care of your horse and do what you have to do to make sure she comes back okay.”

Since mid-August he has gone to the winner’s circles at Springfield, DuQuoin and Hawthorne three times and placed once.

Rollnroz has the most victories (11 in 18 starts) and has earned the most money ($60,348) among the 10 contestants in the $117,000 Incredible Tillie for 2-year-old filly pacers but most of his races for owners Eric and Rosalind James, trainer Trigg and driver Archie Buford have come on the fair circuit.

Lightly-raced Apple Valley (three firsts and a second in six outings) has the tools to be the sleeper, according to Wilfong.

“I thought she was one of the best fillies in the state the first couple times I qualified her,” said the driver. “She had tremendous potential. Then (in August when she finished fifth and sixth after being sent off the favorite both times) I don’t know what happened. Maybe she just needed the time off.

“Last week (in returning to action in her elimination at Hawthorne) she showed up in a really big way (coming from far back to win by a length). Her last quarter was very impressive. She definitely has a fighting chance (in the Kadabra).”