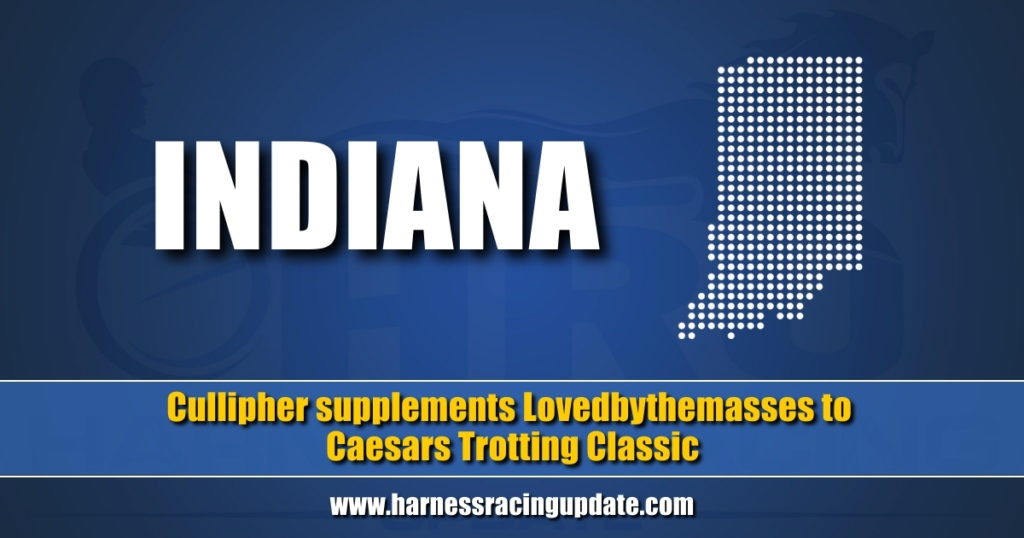 The race is part of a stakes-rich card tonight at Harrah’s Hoosier Park featuring more than $1.4 million in purses.

Harrah’s Hoosier Park will play host to a packed Grand Circuit card tonight (Sept. 24). Over the course of the 15-race program, more than $1.4 million in purses will be up for grabs. The evening’s races are headlined by the $210,000 Caesars Trotting Classic, an event that began as the Centaur Trotting Classic, and is now in its ninth edition. Trainer Jeff Cullipher will send out his first Caesars Trotting Classic starter in Lovedbythemasses, 10-1 on the morning line and drawing post nine. The horse was supplemented for a fee of $20,000.

“We supplemented to the race; we put up the $20,000,” said Cullipher. “The race is extremely tough. We don’t know how he’ll stack up against the good horses here, but we’re going to take a shot. Sometimes you’ve got to take big risks.”

Cullipher, who has collected multiple Hoosier Park training titles and is currently locked in a battle with Erv Miller atop the standings this year, hopes to have a good showing this weekend in Indiana and north of the border. Lovedbythemasses was purchased by the Middletown, IN resident and his partner, Tom Pollack, in early January. In 23 seasonal starts, the 4-year-old Muscle Mass—Incredibility gelding has logged seven wins and four third-place finishes, banking $134,280. Lovedbythemasses took his seasonal and career mark of 1:50.2 winning the Vincennes in August.

“He’s turned out to be a pretty class horse. I think he’s legit,” said Cullipher. “If we knew this horse would turn out to be what he is, we would have nominated him to this race.”

Tim Tetrick will guide the 4-year-old against the likes of Majestic Player A, Lindy The Great, Guardian Angel As, Sermon, Ready For Moni, It’s Academic, Forbidden Trade and Oney Hall. Lindy The Great, fresh off his Maple Leaf Trot score, has been installed as the 5-2 morning line favorite and will start from post two with Andy Miller at the lines.

Cullipher and Pollack, have fared well in and outside the Hoosier State in September. Last Sunday, they scored a Kentucky Championship Series final with sophomore Goldie’s Legacy. The Always A Virgin-sired product captured the $250,000 event in a time of 1:49, holding off Komodo Beach by a neck at the Red Mile. With two wins in the opening rounds of Indiana Sires Stakes action, Goldie’s Legacy currently ranks sixth in points and could add another championship in the mid-October Super Final at Hoosier Park.

The partnership also picked up a Pennsylvania Sires Stakes final in early September with one of their newer acquisitions, True Blue Lindy. The Always B Miki—Think Pink gelding captured the $254,000 final for freshman colts by a neck in a time of 1:52.1 as the favorite. True Blue Lindy will make his third start for Cullipher in Saturday’s (Sept. 25) $824,000 Metro Stake. The freshman sports a record of 5-2-0 in seven starts, three of those wins coming at Woodbine Mohawk Park before his sale. True Blue Lindy has drawn post eight, with Tetrick listed to drive. Cullipher and Pollack will be on hand Saturday night to cheer for their entry.

“We’re flying up Saturday morning. We’re very excited,” Cullipher said. “We really bought this colt more for next year, but he’s turning out to be pretty good this year. It’s not every day that you can buy a (1):51 2-year-old.”

The owner and trainer said that normally they stay away from racing in Canada due to what is involved with crossing the border. For this colt, also eligible to the Breeders Crown, they made an exception.

“This is why we take the chance. We think we have one of the top horses in the race,” Cullipher said. “That’s the great thing about having Tom as a partner. He’s not scared of anything and I’d like to give it a whirl.”

Regardless of this weekend’s outcome, the partnership is gaining a reputation for taking necessary risks and putting horses in big races. Perhaps their efforts will be rewarded sooner rather than later.

A field of eight freshmen will contest the $200,000 Kentuckiana Stallion Management Stake for pacing fillies. Lyons Serenity, a winner in six of seven seasonal starts, is the 5-2 favorite for Jim King Jr. The Ron Burke-trained Cape Cod Hanover, starting from the outside post, is 3-1. Burke also sends out Dragon Lady (4-1) and No Foolin (20-1). Cullipher’s Always Gonna B You, a 1:51.2 Indiana Sires Stakes winner, is 9-2 and will start from post three.

The $182,000 Harrah’s Hoosier Park Pacing Derby features several free-for-all pacers that battled last month at the Anderson oval in the Dan Patch Stakes. Catch The Fire, who split horses late to capture the Dan Patch in August, has been installed as the 7-2 favorite. He will start from the second tier in post 10. This Is The Plan will look to make it three straight for Burke after winning the 2019 and 2020 editions. He lines up in post six as the 4-1 second choice. Local interests Tellmeaboutit and Little Rocket Man, second and fourth in the Dan Patch, have drawn posts seven and nine, respectively.

The speedy Fulfullnmydestiny leads a field of eight freshman colt pacers — six of the Indiana-sired two-year-olds — in the $120,000 Elevation. Trained and driven by James Yoder for Brett Boyd Racing, the son of Tellitlikeitis brings a 7-4-2-0 record into his first Grand Circuit test. A 1:49.2 winner in his last start, Fulfullnmydestiny starts from post six as the 4-5 favorite. Ponda Warrior, another top Indiana Sires Stakes colt, starts to his outside for Jay Hochstetler. Brandon Bates will drive.

Iteration, the 5-2 morning line selection trained by Marcus Melander, leads a group of seven sophomore trotting fillies in the $115,000 Moni Maker. The Chapter Seven—Steamy Windows filly tops the field with $429,483 in seasonal earnings. She will be driven by Brian Sears. Swift Swanda, a winner in seven of 10 starts, is 3-1, and Darlene Hanover, a 1:51.4 winner, is 7-2 for trainer Brett Bittle.