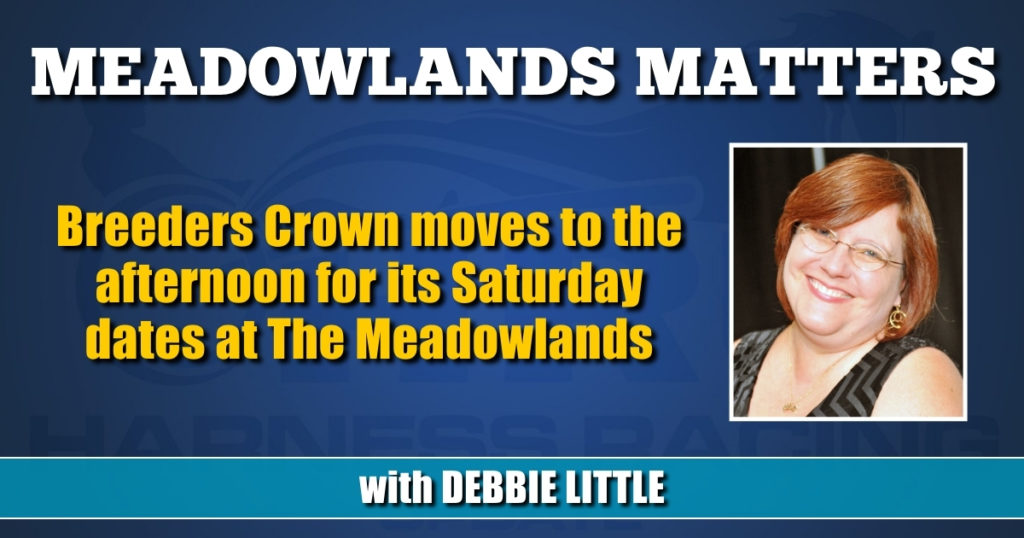 Since its inception in 1984, change has been part of the Breeders Crown, and this year is no exception.

All 12 finals will still take place on the same weekend at The Meadowlands, with the 2-year-olds on Friday night (Oct. 29), but this time, the 3-year-olds and open races will take place Saturday afternoon (Oct. 30).

The Meadowlands would have preferred to have all the races at night but that isn’t possible because Monmouth Park’s “Monmouth at The Meadowlands” turf meeting is scheduled at the same time.

“We asked them [if we could race at night on the Saturdays] and they said ‘no’ and under the law they have the right to race from the day after the Hambletonian to December 12th,” said Meadowlands’ president and chief executive officer Jeff Gural. “So, they don’t have to let us race at all.”

Thanks to Gural’s good relationship with Dennis Drazin, chairman and chief executive officer of Darby Development, the operator of Monmouth Park, a compromise was reached where Monmouth would not race at all on the two Crown Friday nights and would allow The Meadowlands to race during the day on the two Crown Saturdays, prior to Monmouth’s night cards.

“There was a deal, I believe it was directly between the SBOA and Darby Development, to forgo those racing days for the benefit of the Breeders Crown,” said John Heims, Monmouth’s director of racing/race secretary. “We were approved for our race dates back in November 2020, so those dates are set in stone by the commission. Any change or alteration from that would require commission approval.”

Initially, Monmouth was approved to race every weekend in October with the exception of Saturday, the 15th, when the 100th running of the Far Hills race meeting, a steeplechase event in New Jersey, will take place.

The New Jersey Racing Commission met on Wednesday and approved Monmouth’s request to drop the two Fridays as well as approve The Meadowlands racing on those Friday nights and Saturday afternoons.

“I’m sure glad that everybody came together and we got a deal done to where we can have the Breeders Crown at The Meadowlands in 2021, because of the tremendous impact it has on the standardbred economy in New Jersey,” said Mark Ford, president of the Standardbred Breeders and Owners Association of New Jersey (SBOA). “Thank you Jeff Gural for going the extra mile.”

Everyone connected to the Crown would have preferred to race at night on Friday and Saturday, but are appreciative of not having to change the dates.

Daytime racing will have the Breeders Crown vying for attention and dollars with many popular thoroughbred signals.

“I do agree with Jeff, I think our European market will see an uptick because of the afternoon,” said John Campbell, president and chief executive officer of the Hambletonian Society. “The afternoon on the domestic market is really unknown. As with any race card, it doesn’t matter where you are, it’s about fitting your signal and races in the right slots in between the major signals whether that be night or afternoon. And we’re going to make every effort to do that.”

The Meadowlands has previously played host to 91 Breeders Crown Finals and ranks behind only Woodbine Racetrack, which has hosted 95. The Big M will move to the top of the list by the end of October with 103 and since Woodbine no longer contests standardbred racing, The Meadowlands will hold a sizeable lead on the next track on the list, Mohawk Raceway, now known as Woodbine Mohawk Park, with 56.

“Charlie Keller III started back, I want to say, in 2015 probably, saying since we had interest, we should try to get a three-year rotation because we take three years’ worth of payments and when you’re paying in a yearling or a 2-year-old, you sort of would like to know what you’re paying into,” said Moira Fanning, director of publicity/chief operating officer for the Hambletonian Society.

Starting in 2017, the three-year rotation was Hoosier Park, Pocono Downs and Woodbine Mohawk Park, and then back to Hoosier in 2020. Even though The Meadowlands, which had played host to the Crown in 2014 and 2016, was not part of that initial rotation, they were always considered in the mix.

“You can’t talk about being at the top tracks in North America and not include The Meadowlands in that rotation every couple of years,” said Fanning.

The Breeders Crown plans to announce its 2022 venue sometime in October.