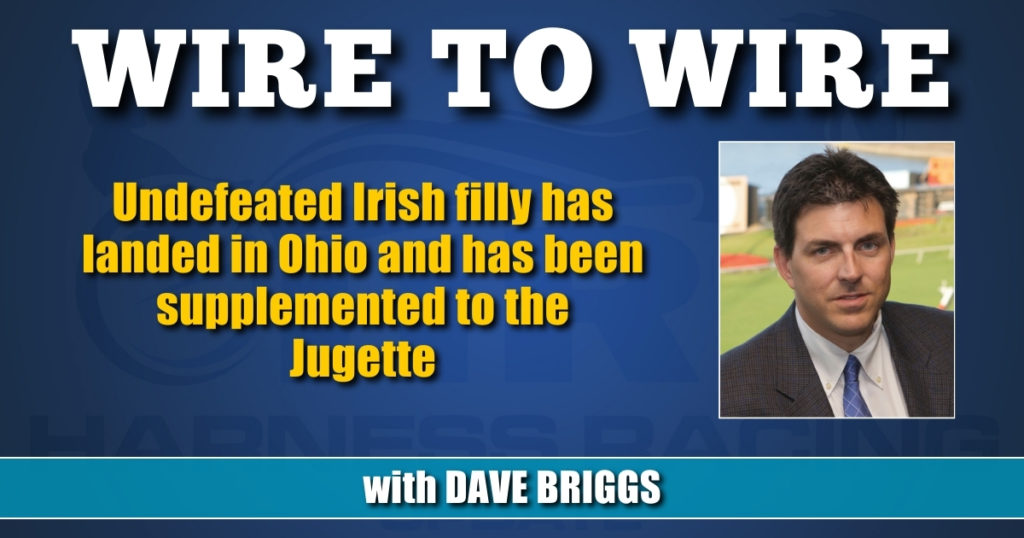 Brian Brown admits he was skeptical when he was told he was being sent “a great filly” from Ireland. For one, the Irish are frequently blessed in the storytelling arts. For another, he has heard a horse was “great” plenty of times before from people of many nationalities only to learn to the contrary.

But so far, Irish born and raised 3-year-old pacing filly Oakwoodanabella IR has proven to be a pleasant surprise for the Delaware, OH-based trainer. So much so she is being supplemented for $15,000 to Wednesday’s (Sept. 22) Jugette after only two U.S. starts, both impressive victories at Scioto Downs.

“That’s basically what it evolved into,” Brown said Saturday of the decision to try the Jugette. “I did not start thinking bigger races until after her first start, but they did not send her over here to race in non-winners of two or non-winners of four. They sent her over with the idea that she could turn into this horse and they wanted to be in the bigger races.”

Brad Conrad | Irish import Oakwoodanabella IR (Austin Hanners) setting her career best mark of 1:50.4 on Thursday (Sept. 16) at Scioto Downs. She will race Wednesday (Sept. 22) in the Jugette at the Delaware County Fairgrounds.

Oakwoodanabella IR, a daughter of Foreclosure N out of the No Pan Intended mare Carmel Camden was bred by James Delaney of Rhode, Co Offaly and is owned by Denis Copse of County Limerick. She is a perfect 8-for-8 lifetime, with her first six career starts coming in Ireland and Great Britain at 2.

“We got a little bit of a late start because she had to stay in quarantine for three weeks and then when I got her almost trained down and ready to qualify, we sent in for her eligibility and that’s when it dawned on us that she wasn’t DNA’ed, so that cost me two-and-a-half weeks. I’m actually a good two weeks behind what we had planned just because of the DNA,” Brown said.

“Even when we qualified her, it was so easy. The first start, that was actually pretty impressive. Then the other night, they did pull the ear plugs, but he said if he had just tapped her a couple of times then he wouldn’t have even had to pull the ear plugs. He laid the whip on her coming around the last turn and, even with the plugs out, he just laid the whip on her and she paced forward,” Brown said. “So far, she’s been everything they had been telling me she was.

“It would have been nice to have another start, you know, skip a week or 10 days and be ready for (the Jugette). We’re a little bit rushed on this, so I’m hoping everything works out racing back in six days.”

The trainer said he didn’t even know one could supplement to the Jugette until he asked. One can only supplement to the companion male race, the Little Brown Jug, if a horse first wins one of four major races.

“So, I didn’t have (the Jugette) on the list of things to start pointing for. I was trying to point more for Lexington,” Brown said. “To try to be ready for one of the better races in Lexington would have been asking for a lot, too, but we expect it to not be a big field at Delaware. We’re at home and she’s very handy. She’s fast and quick and strong, so we thought this might be a better race.”

Brown said he has no idea how many people are coming from Ireland to see Oakwoodanabella IR race in Delaware, OH — especially given extra travel restrictions during the COVID-19 pandemic — but Copse is expected to come.

If it’s anything like 21 years ago, Ohio might want to prepare itself for a full-on Irish invasion. In 2000, Mark and William Flanagan from Dublin turned their visit to the Little Brown Jug into the adventure of a lifetime as co-owners of Jug colt Mattrick Henry.

The Flanagans rented a huge RV they decorated with Irish flags and a giant banner proclaiming, “the Irish have landed.” They also procured 300 bottles of beer for themselves and the nine friends they brought with them from Ireland. It wasn’t long after arriving at the Delaware County Fairgrounds that the Irish quickly corrected an oversight. Behind the winner’s circle is a row of flags: New Zealand, Australia, Canada, the United States and, at that time, the Union Jack of Great Britain. Yet, an Irish flag was nowhere to be seen. So the Flanagan brothers took the right people out for drinks and had the British flag removed. The sun rose the next morning on the Irish flag waving proudly where the British flag had been.

Mattrick Henry, driven by Tony Kerwood for trainer Stew Firlotte, finished seventh in his heat and failed to advance — and his connections still had a party.

There’s no telling what the Irish might do if a horse shipped to the U.S. from Ireland wins the Jugette, but Brown said he’s game to find out.

“We’re very, very thankful that this horse came into our barn,” he said. “I think she’s going to make a really nice horse. There’s hundreds of trainers they could’ve called, anyone on the East Coast, but they elected to send her to Ohio. It was just an odd coincidence. One of the guys started texting me out of the blue and it went on for a couple of years and we got to this point.”