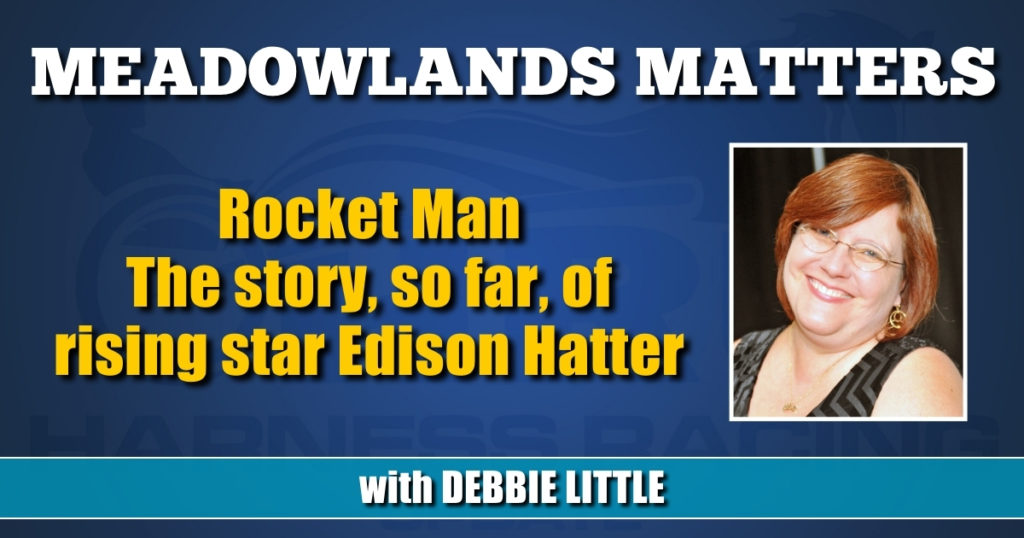 The story, so far, of rising star Edison Hatter.

Edison Hatter works for Rosecroft Raceway, Freehold Raceway, The Meadowlands, Woodbine Mohawk Park and the National Aeronautics and Space Administration (NASA). So, I guess sometimes, you DO need to be a rocket scientist.

The 22-year-old Hatter, the newest member of The Meadowlands TV team, also has a full-time gig as an aerospace engineer for NASA.

To say Hatter is an overachiever is an understatement when you consider that he completed his freshman and sophomore years at college during his final two years of high school.

The Maryland native took classes at Mount St. Mary’s University near his home in Emmitsburg, which his high school credited towards his diploma.

“Running cross country was the only time I was actually at my high school,” said Hatter. “When I started at the Mount, my real area of knowledge was mathematics. The first class I ever took [was full of] juniors and seniors and me, a 16-year-old high school student.”

While in high school, Hatter also ran to be a member at large for the board of education.

“I lost that election but I got a position serving on the main subcommittee to the board and I served there for 2 ½ years. I’ve been asked to consider runs for state senator or state house or board of education again but obviously with my current schedule it’s totally out of the question.”

Hatter has no familial connection to horse racing, he just found it on TV one day.

“I followed the 2012 Triple Crown that year and I had a middle school graduation party the Saturday that California Chrome missed the Triple Crown,” he said. “In 2017, I turned 18 and I said, ‘Dad, can you finally take me to a race?’ I went to that Preakness.”

The following year he saw his first harness race at Ocean Downs.

“High school seniors in Maryland, when they graduate, usually go down to the beach for a week, so I decided to check out Ocean Downs on the drive down,” said Hatter. “I probably thought it was thoroughbreds.”

He transferred to the University of Maryland in College Park for his junior and senior years and in 2019, he went down to Rosecroft for the first time.

“I was watching it one night on TV and said, ‘Huh, Rosecroft is only 30 minutes south,’” he said.

That September, the start of his senior year, he found out from a friend of a friend that they needed someone to call the races at Rosecroft.

“Edison was friends with Russ Adams and Russ used to be our photo finish guy here,” said Pete Hanley, director of racing at Rosecroft. “Pete Medhurst is our regular announcer and he’s a broadcaster for Navy sports, so there were conflicts. Russ said I know this guy Edison and he might want to do it.

“We had him do some qualifiers and practice so he’d feel comfortable. I’ve been in horse racing my whole life and I struggled to get opportunities when I was younger and I was always like, ‘Dang, if I could just get a chance to do something and prove I could do it, that would be a good thing’. So, I’m more than willing to give somebody a shot.”

Hatter had never called a race before and had no plans of ever doing it, but he was a quick learner.

“I just listened to [my first ever call] for the first time in a while the other day and it sounds pretty choppy, but overall, it’s really not too different from the style that I use today,” said Hatter. “I’m amazed. I don’t know where it came from, but I actually said a horse is first over and a horse is following cover and I don’t even know where those terms came from. I think I must have been listening to Pete and I must have heard the words and pieced it together. I know I said it but I don’t think at that point I really knew what it meant. I don’t know what in the world led our general manager to say give him a microphone and a program, but they did and I called that Wednesday.”

Hatter learned plenty of new skills at Rosecroft, including being on-air talent, photo finish, charting and he even drove the starter car during qualifiers.

“I never realized that the starter controls the speed as well,” said Hatter. “So literally, all you do as the driver is steer the car. I really thought I had to use the gas pedal. Oh my God, what speed am I supposed to go? So, I’m glad the starter does that. It was still a little white-knuckle experience but since I didn’t have to do the speed, it calmed my nerves pretty quickly when I found that out.”

Due to a change in his schedule, Medhurst was able to call both nights a week at Rosecroft with Hatter as a backup, but Hanley stepped in and helped out again.

“We needed an announcer, so I called around the industry to see who could help me out,” said Freehold director of racing Karen Fagliarone. “I’m very friendly with Peter (Hanley) and he said ‘Well, I actually do have a guy here.’ I thought the distance was going to be way too far, I never thought he would come but he came up and he was thrilled.

“I wasn’t expecting someone so young and when I put him up in the stand and I listened to him, I was like, ‘Wow, this kid is really good.’ I was just so impressed. Somebody so eager and so passionate about the industry is refreshing. He’s going to go places, this kid. That’s what I tell him, he’s going to be a somebody.”

On Hatter’s first day at Freehold, he was offered the full-time photo finish gig at Rosecroft, which he obviously accepted.

Not long after that a chance meeting at The Meadowlands also went in Hatter’s favor. He introduced himself to on-air co-hosts Dave Brower and Dave Little on a random Friday night down on the set and Brower was impressed.

“I didn’t really know a whole lot about him,” said Brower. “I think he had just started doing the Freehold announcing and there was a certain enthusiasm and confidence in the way that he conducted himself. I guess that was my lasting impression of the introduction.

“We decided to slot him for a TVG role one night and it couldn’t have worked out any better. The reviews I got from anybody I asked was that he fit in like a natural and that came from the TVG people and the people watching TVG. I know how young he is but he acts like a polished professional.”

As someone in his 20s, Hatter gives props to The Meadowlands for their events that bring younger people out to the track, like the under-30 handicapping contest, that gave participating 18- to 30-years-olds a free program, free dinner coupon, free entry form and cash prizes.

“I think the young people enjoyed it,” said Hatter. “I talked to some of them and a lot of them will come back as racing fans going forward. So, I think a lot of the outreach in that way from the racetrack is good.”

Hatter is appreciative of all the opportunities that have come his way, including the latest, part of the In The Money media network hosting the “First Over” podcast for Woodbine Mohawk Park.

“I’ve forever got to be thankful to Pete Hanley and Lisa Watts, our general manager at Rosecroft,” said Hatter. “If it wasn’t for them just blindly trusting me that night, I assure you I would never be in this industry at all, let alone at Freehold, The Meadowlands and Rosecroft.

“And for that matter, I have to thank Karen Fagliarone as well. I guess Pete Hanley gave her a decent recommendation for me but she didn’t have a whole lot to work off of, either. And to Dave Brower as well. At that point I hadn’t done a whole lot of on-camera work. I sit back and think on the last couple of years that have led me to where I am today and it’s almost unbelievable.”

The last line of Hatter’s favorite song “Long Live” by Taylor Swift says, “One day we will be remembered.” That appears to be an accurate prediction for Hatter.