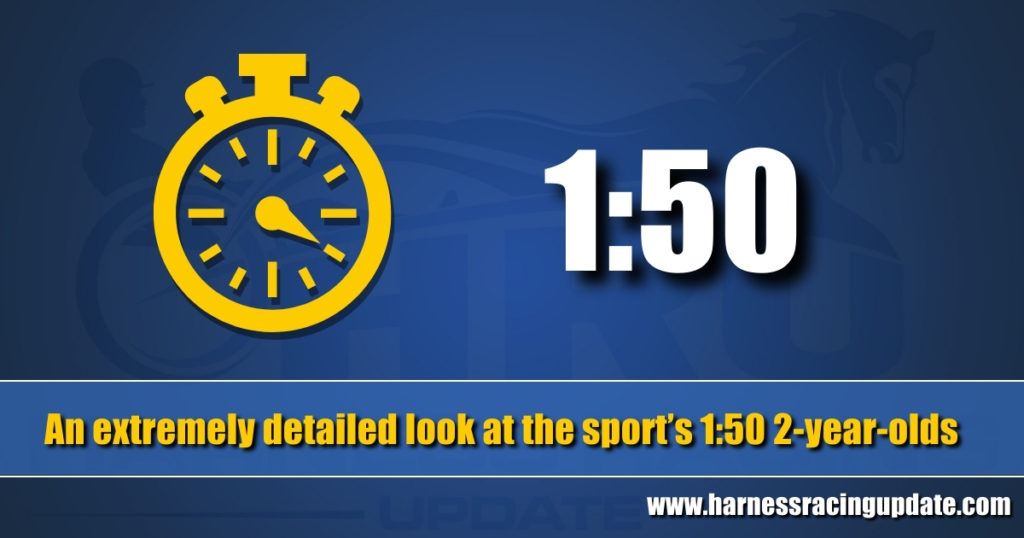 An extremely detailed look at the sport’s 1:50 2-year-olds

By Philip and Jonathan Sporn

Back in April we did a retrospective of the 1:50 mile (full story here). Now that the stakes season is gearing up, here is a look at the elite 2-year-olds – 54 youngsters that have cracked the 1:50 or faster barrier. This list and the associated table are correct as of Sept. 15, 2021.

In terms of sires, nine of the 1:50 2-year-olds are by SOMEBEACHSOMEWHERE, followed by CAPTAINTREACHEROUS (7), WESTERN IDEAL and ART MAJOR (5), AMERICAN IDEAL (4), SWEET LOU (3), and ALWAYS B MIKI, YANKEE CRUISER, BETTOR’S DELIGHT and WESTERN HANOVER, all knotted at 2.

An exclusive group of TWO broodmares have multiple 1:50 credits. The American Ideal mare IT WAS FASCINATION’s son CAPTAIN TREVOR captured the International Stallion Stakes in Lexington in 1:49.2 in 2018, and the following year, her kid CAPT MIDNIGHT won the final of the Dream Maker Series in 1:49.4 at Woodbine-Mohawk. Both colts were trained by Tony Alagna.

The other broodmare to produce a pair of 1:50 juveniles is the Apaches Fame mare GREAT MEMORIES. She turned the trick first in 2011 with WARRAWEE NEEDY (by E Dee’s Cam) when he captured an Ontario Sires Stakes Super Final at Woodbine in 1:49.4. Then, in 2018, her daughter (by Sweet Lou) scorched the oval at Lexington in 1:48.3, winning the International Stallion Stakes.

Almost 50 per cent of the 1:50 yearlings (26) were sold at Harrisburg, while 13 were sold at the Lexington Select sale. Single yearlings were plucked from Tattersalls, Forest City, Canadian Yearling and Ohio Jug sale, while 11 were not sold at public auction.

THEY GROW UP SO FAST!

Here’s a stat you’ve never seen. While all horses have Jan. 1 as their official birthday, who is the youngest 2YO to win in 1:50? Using their actual foaling date vs. the date of their 1:50 or faster win, HE’S WATCHING is the youngest…TWICE. A foal of June 13, 2011, his first 1:50 mile was August 9, 2013, making him a mere two years, one month and 27 days old when he won in 1:50f in a NYSS at Tioga Downs, lowering Rock N Roll Heaven’s world record by two ticks. When he won in 1:50 at Vernon Downs (another track record) on Aug. 31, he was a more “mature” two years, two months, and 18 days old. Those are the two youngest performances ever by a 2-year-old.

Not to be outdone, on Friday, Aug. 27, FULFULLNMYDESTINY became a member of the club, winning an Indiana Sires Stakes event at Hoosier Park in 1:50, the first such mile in track history. He lowered that record two weeks later (1:49.2), also at Hoosier Park. A gelded son of TELLITLIKEITIS, he is trained and driven by JAMES YODER. He joins fellow geldings SHEER DESIRE, ONE MORE LAUGH, FEEL LIKE A FOOL, PQ THREE, LIMELIGHT BEACH, DRAGNET ALERT, NO MAS AMOR, ELVER HANOVER and FREEDOM WARRIOR and SOUTHWIND GENDRY on the 1:50 list.

So that’s the story of the elite 2YOs to date…. 54 of them so far, with more to follow in the coming months and years.