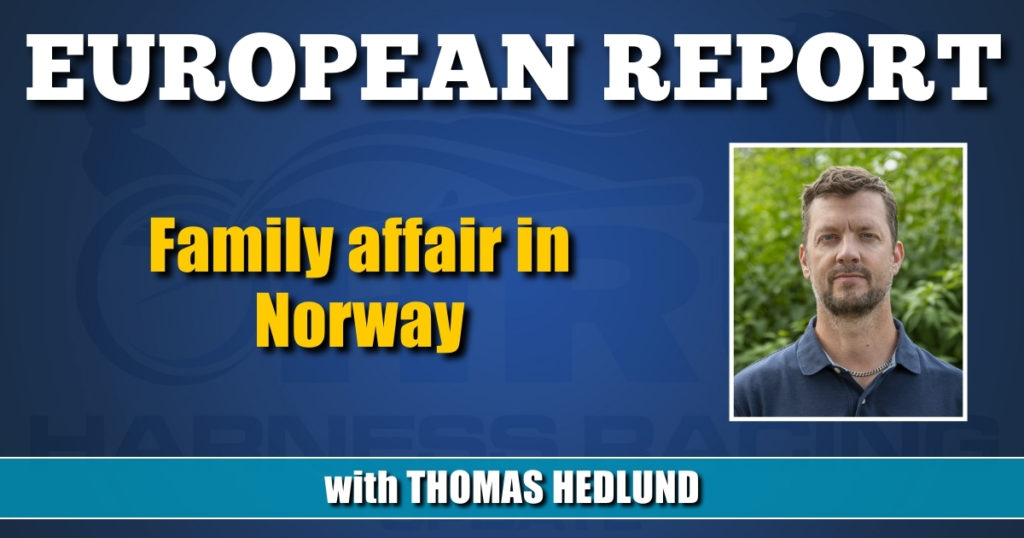 Geir Vegard Gundersen dominates Norwegian harness racing when it comes to classic stakes races and during the past weekend, Geir and his son Magnus Teien claimed two Derby races in Oslo.

The Derby itself became a splendid success for the Gundersen stable since Magnus Teien disarmed his father – Geir sat in front with first choice Cicero T.G. (Kadabra) – after a perfect pocket trip with Kraesj (Brilliantissime). Magnus Teien Gundersen lifted his horse to attack at mid-stretch when outside trotter Falcon Eye ran out of power and the double success for the Gundersen stable was a fact.

Leif Norberg / ALN | Geir Vegard Gundersen with his son Magnus Teien were successful in Norway and claimed two Derby races in Oslo during this past weekend.

Kraesj won in a mile rate 1:58.4 over 1.6 miles in the Sunday’s (Sep. 12) Derby. On Saturday’s (Sep. 11) race card, The Derby for mares was held and even then the victory landed in Gundersen’s hands. Magnus Teien Gundersen drove Global Bred To Win (Bold Eagle) and opted a position outside of leader Jolene B.R. (Muscle Hill) and Global Bred To Win fought strongly and got control of the race at the top of the stretch. The 4-year-old Muscle Hill mare flew to safe win in mile rate 1:58.3 over 1.3 miles and she has now 12 wins out of 15 attempts in her career.

Trainer Geir Vegard Gundersen operates a quite small stable on his farm outside of Oslo and it’s fair to call his business a family affair where his wife and two sons are included to a very high degree.

”We have some 25 horses at the farm and to be honest I wouldn’t mind reducing that number to 17-18 horses. The whole family takes part of the successes and I’m very happy that we can win races like the Derby,” said Geir Vegard Gundersen to HRU.

Gundersen himself was one of the most hired catch drivers in Norway for almost 20 years, even if he always has had 10-12 horses as a trainer and it’s clear that he has reached new levels since he got down in numbers of drives.

The $175,000 Kriteriet for 3-year-olds saw a winner in Stian Eilefsen trained I.D.Exceptional (El Diablo B.R.) paired with Ole Johan Östre. The duo took a safe wire to wire win in mile rate 1:59.4 over 1.3 miles and trainer Eilefsen was a happy man after the race.

”This is a dream for me. The biggest thing to win for me isn’t Elitloppet, but the Derby or Kriteriet in Norway”, said Eilefsen.

In $175,000 Kriteriestoet for 3-year-old fillies Bo Westergaard trained Thai Brooklyn (Broadway Hall) sprinted to victory after an outside trip where the attack was set in before the last turn. Thai Brooklyn disarmed leader Readyforwine over the stretch and flew to outstanding win. This was her 11th victory in 13 starts and apprentice driver Nicklas Korfitsen sat in the bike.

Cleangame back as a winner

Jean-Michel Bazire trained Cleangame (Ouragan de Celland), by some fans considered the best trotting gelding in Europe, made his second start in more than a year when $200,000 Prix d’Eté was held at Vincennes in Paris on Saturday (Sep. 11) afternoon and Bazire himself was obviously very pleased with his horse’s performance as the duo hit the wire as winners in mile rate 1:55.2 over 1.6 miles.

Cleangame came to the lead with 1,900 meters to go and had stablemate Davidson du Pont chasing behind him and another stable mate, Dorgos de Guez in second over. This trio seized the top places in the race and winner Cleangame will most certainly continue his winning track as he’s now back for real after a year with injuries.