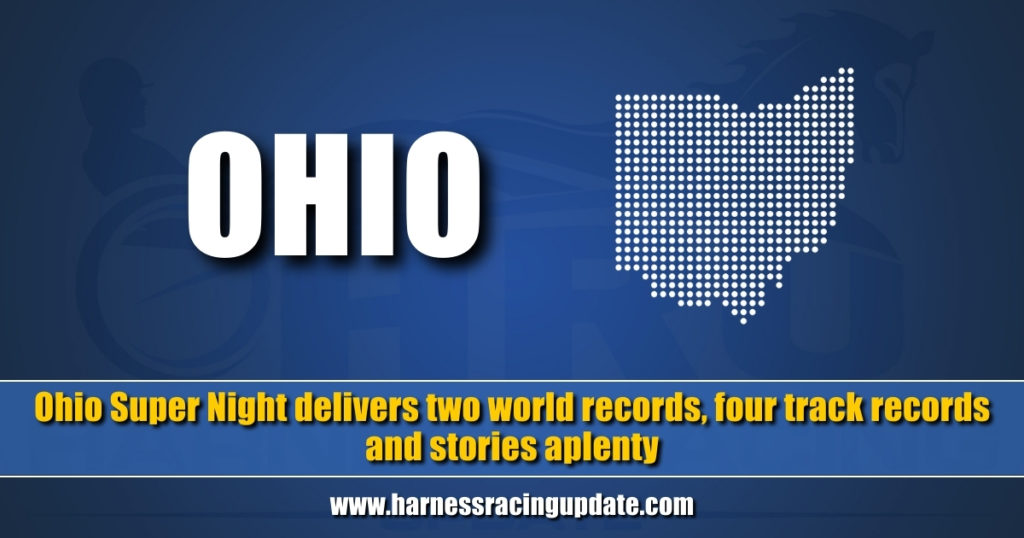 The 3-year-old trotting filly, Herculisa kicked the night off by re-writing history with her world record performance in 1:52.3. The My MVP daughter used her inside rail position to grab the early lead from Swizzle Hanover (Mike Wilder) and never looked back and cruised to a 3 ½ length victory over Katie’s Lucky Day (Trevor Smith). Swizzle Hanover held on for third.

“She’s a tremendous filly. Virgil had her right tonight, she was awesome,” said Miller.

“I’m thrilled for Steve. He’s a great guy and passionate about the sport,” said Morgan.

JJ Zamaiko | Winning Ticket (Aaron Merriman) pushed his perfect 2021 to 10 straight wins with his 1:54.2 win, one of three OHSS final wins on the night for trainer Chris Beaver.

Herculisa has now earned $356,862 lifetime and revenged her only poor performance, the 2019 OHSS final when the filly broke stride and finished seventh.

“I thought she was the best last year. She was in the two-hole and got crowded around the last turn,” said Morgan. “It’s been a long year. I was thrilled to see she had the rail (tonight) to vindicate herself tonight.”

Next up was the freshman colt pace and the anticipated battle between the undefeated Gulf Shores and the $150,000 Next Generation champion, Sling Shock.

Sling Shock (Dan Noble) outstepped his rival for the early lead, allowing a patient Ronnie Wrenn, Jr. to sit in the pocket with the eventual winner.

When driver David Miller came first-up to challenge with Seaside Way, Wrenn moved Gulf Shores off the rail and sprinted past Sling Shock to score a four-length win in 1:52.1. Terminator (Chris Page) rallied for second and Sling Shock held on for third.

The son of Downbytheseaside, a $100,000 yearling purchase, is owned by the Country Club Acres, Diamond Creek Racing and the Wingfield Brothers.

“We were going a pretty good clip there, :26.2. I knew Danny had a nice colt there,” said Wrenn. “All year long I thought he was the best colt and I think tonight he showed it.

“I qualified him twice at Delaware (County Fairgrounds) and I told Brian that he was special.

While Wrenn was gushing over Gulf Shores, trainer Brian Brown wasn’t so sure early in the freshman’s career.

“I described him a ‘brown paper bag’ in Florida,” said Brown. “He was just ordinary. He doesn’t do anything (special). He just goes out there and races. He made a big move down the backstretch and we went around a very nice horse and did it pretty handily.”

Gulf Shores is now a perfect five-for-five on the year and has earned $251,500 on the young season.

Another world record fell in the 2-year-old filly pace when the unbeaten Sea Silk (Chris Page) overcame post #8 to lead a 1-2-3 Burke Racing Stable and Weaver Bruscemi sweep in 1:51.2.

“She’s been flawless this year. Everything we’ve asked her to do, she’s done,” said Mickey Burke, Jr. “It was great to finish 1-2-3, you can never complain about that. We have been fortunate. These girls have been great all season.”

Sea Silk, a $47,000 Downbytheseaside yearling, is now a perfect seven-for-seven and earned $340,000 for Burke Racing, Weaver Bruscemi, Knox Services and the Hatfield Stables.

Gabby’s C Note scored a three-length win over Be My Baby Now (Chris Page) in 1:56.2. She is co-owned by the trainer, breeder Johanna Beaver and Zeehandelar.

The Mighty Hill held off Rose Run Xtra by a scant nose to lower his existing track record to 1:55.4.

The What The Hill gelding is campaigned by Beaver, Donald Robinson and the VIP Internet Stable.

MGM Northfield Park officials limited the wagering to “win only,’ but that didn’t stop the punters from placing $50,000 of the $59,000 wagered to win on Charlie May.

Heart Of Chewbacca (Chris Page) was gunned off the gate’s wings from post #8. Odds On Shaggy (Mitchell Cushing) was second early, forcing Charlie May into third.

Miller tipped the heavy favorite off the pylons for the first over trip and stuck a head in front at the three-quarter mile pole.

Noble kept Borntobeshameless back in the field for most of the mile and rallied past the tired Charlie May by a neck in a lifetime best 1:51.3.

Borntobeshameless is trained by Christi Noble and owned by James Morris, Dennis Owens and the Noble’s Norman Rae Racing.

The Nob Hill High filly, who won for the 15th time in 22 career starts, is owned by trainer Brian Haynes.

Most of the Ohio Super Night participants will now turn their attention to the Ohio Breeders Championships at the Delaware County Fairgrounds on Sept. 19-23.