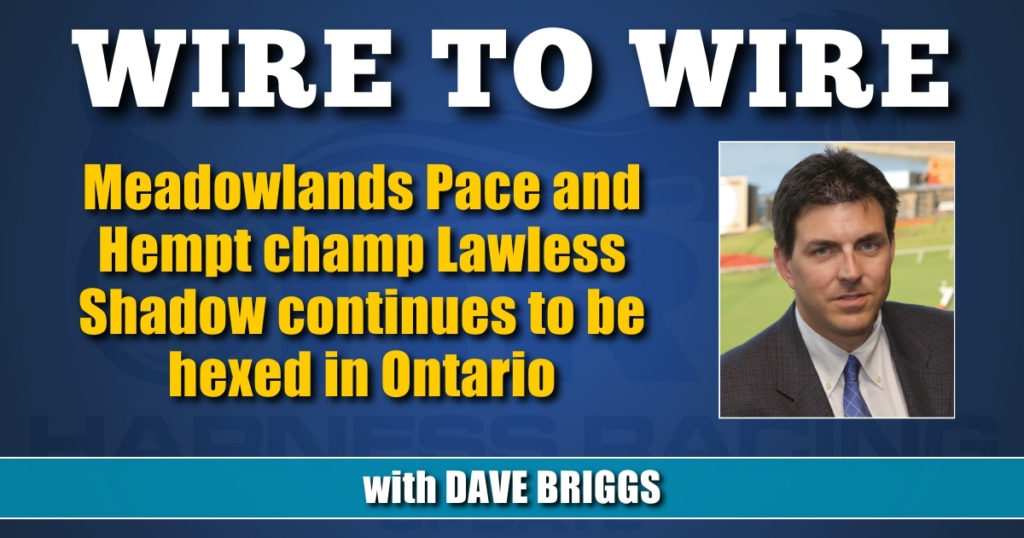 Lawless Shadow is 0-for-3 in Ontario Sires Stakes action this year and now has a foot abscess heading into Saturday’s Pepsi North America Cup eliminations.

Dr. Ian Moore is starting to believe his star sophomore pacing colt Lawless Shadow is cursed when racing on home soil in Ontario.

On Tuesday (Aug. 31), four days before Lawless Shadow is scheduled to race Saturday (Sept. 4) in one of two eliminations for the $1 million Pepsi North America Cup, Moore discovered an abscess on one of Lawless Shadow’s feet the trainer said he hopes is going to pop soon.

“I’d rather not talk about it at the moment,” a dejected-sounding Moore said at first before later elaborating. “I’m beginning to think he’s jinxed in Ontario this year, because it’s been nothing but a stream of bad luck for him up here for some reason. I gave him last week off to prep for this and now this happens. Anyway, it’s just the way it is, I guess, but it’s frustrating me a little bit today.”

Despite winning both the $700,000 Meadowlands Pace and $300,000 Max Hempt Memorial in the U.S. over the last six weeks, Lawless Shadow has finished third, second and 10th, respectively, in three Ontario Sires Stakes (OSS) Gold Series events in 2021. Though the son of Shadow Play—Ladycino has earnings of $570,506 this year and a mark of 1:48.2 on the five-eighths mile track at The Downs at Mohegan Sun Pocono, the colt has won just once in Ontario this year. He posted a victory in an overnight on June 19 at Woodbine Mohawk Park.

If that wasn’t distracting enough this week, Moore, 67, still had some serious logistics still to work out when reached Thursday morning. He is racing 21 of the 23 horses in his barn between Friday and Sunday this weekend at four different tracks.

“That is a challenge when I only have one five-horse trailer and we’ve got both fillies and colts,” Moore said. “I’m limited on help, too, so I’m hoping to sort all of that out today… It’s extremely difficult, but we’ll get it done for sure. I don’t know how people like Carmen Auciello do it, with the numbers that they’ve got. And they do it every night.”

Counting Tuesday’s races, all 23 of Moore’s trainees are scheduled to race this week, which is a good problem to have.

“Yep, but it’s hard on the nerves for an old guy, too,” Moore said, laughing.

All told, Moore has seven horses racing on Saturday night at Woodbine Mohawk Park — six in stakes races. Besides Lawless Shadow — who drew post four in the first of two NA Cup eliminations and is slated to be driven by Mark MacDonald — Moore is scheduled to send out Century Inspector in the second of two $100,000 OSS Gold Series divisions for 2-year-old pacing colts (post 1, race 2, Tyler Moore driving); Marloe Hanover in the $316,000 final of the Roses Are Red (post 5, race 5, Jody Jamieson); Lady Arthur in the first of two eliminations for the Fan Hanover (post 1, race 9, James MacDonald) and both Tattoo Artist (post 2, race 10, Bob McClure) and reigning Canadian Horse of the Year Century Farroh (post 4, race 10, Sylvain Filion) in the $590,000 final of the Canadian Pacing Derby which Moore won in 2015 with State Treasurer.

Moore said Tattoo Artist and Century Farroh, “are both in good shape. I think Tattoo would be favored over Century Farroh because of performance recently. Century Farroh has slipped back a little bit. This will probably be his last year racing, I would say. Those good horses don’t go forever. With the speed they go every week, it’s hard on them, there’s no doubt about that.”

The trainer said Marloe Hanover is, “a really nice mare that gives you all she’s got every time out. She might be a little bit in deep there, but (part-owner) Eric (Cherry) wanted to try her because there wouldn’t be any other class for her, probably, so here we are. Actually, she raced pretty well the last couple of times. Jody got stuck in with her and never really had a chance to give her a head. So, we’ll see what happens. She’ll make an account of herself, for sure… I’ve never had a mare in the Roses Are Red before, so that’s kind of neat.”

“She hurt herself in the paddock, that’s why there was a break there after she won in the mud in :52 (on June 25). It had nothing to do with the racetrack at all. I thought she’d be gone somewhere for a broodmare now, but she surprised me and came back. I got her ready in a hurry, so she was lacking a mile or two last week when she raced, so I look for her to be better (this week). She’s tough, so you never know. She might be alright. She’s the only homebred that we’ve got and she’s been a really good mare for us.”

As for Century Inspector, Moore believes he’s the best of the stable’s 2-year-old colts.

Despite concerns about Lawless Shadow’s health, Moore was pleased with his pupils heading into a major stakes night and.

“They all drew pretty well on Saturday, for once,” he said, laughing.