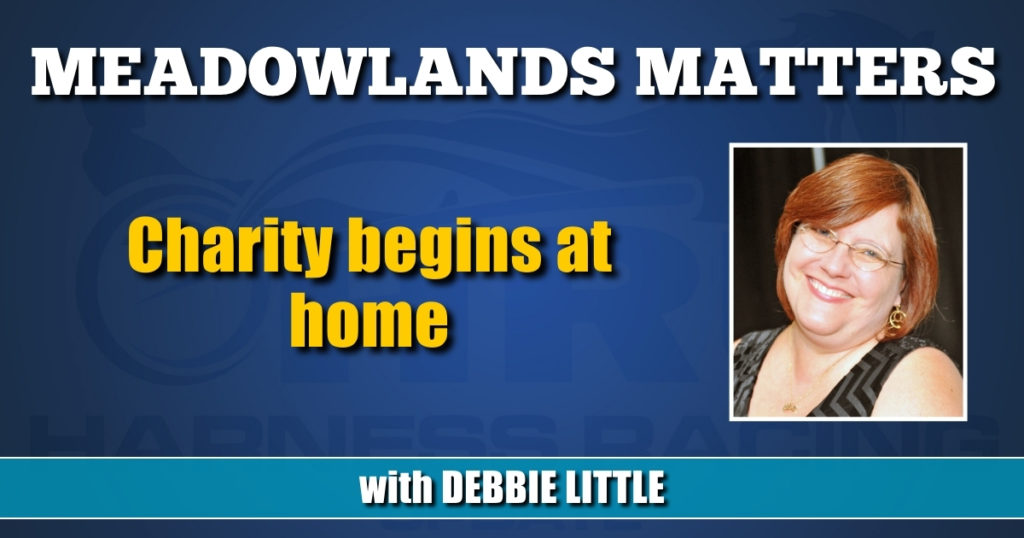 Three years ago, the Libfeld-Katz Breeding Partnership of Al Libfeld and Marvin Katz became the presenting sponsor for the 2019 Breeders Crown at their home track of Woodbine Mohawk Park. But that wasn’t enough for Katz.

“The idea that we would just have all these big races and all these people come into town, race for all this money and not try to give something back to the communities that were hosting it, I felt was not in the best interest of the industry or the racetracks or the communities and we could do a better job,” said Katz.

Thus, the Breeders Crown Charity Challenge was born and although it has gone through changes since its inception, the main focus remains to forge a lasting bond between the industry and their local community and this connection would be solidified through donations to local charities in the host track’s home area.

“Because the Breeders Crown is going to be at The Meadowlands this year, I felt it was even more important that we have as successful a campaign as possible and try to enlarge the footprint and the degree of participation because The Meadowlands holds such an important place in the industry,” said Katz. “And I wanted it to be New Jersey based because the impact would be so important in New Jersey and throughout the whole industry.”

The charities were chosen by a committee that included The Meadowlands, Standardbred Breeders and Owners of New Jersey and New Jersey politicians, including Senator Stephen Sweeney and Governor Phil Murphy’s wife, Tammy.

In previous years, the Challenge was tied to horses, returning freshman champions in 2019 and 3-year-old pacing colts in 2020, but this year is different.

“I came up with the idea, to try to create something new, that we would have a driver’s challenge just to try to tweak the format and make it more interesting,” said Katz. “It started with the basis of the four leading Grand Circuit drivers. We were going to try to build teams around these four drivers.”

The top four Grand Circuit drivers – Dexter Dunn, Yannick Gingras, David Miller and Tim Tetrick – were chosen because their Grand Circuit points are updated weekly and it would be easy for fans to follow along at https://www.ustrotting.com/grandcircuit/.

“The drivers, to their credit, have not only contributed their name, their time, and their efforts, but money. They will contribute $10,000 [$2,500 each] as well,” said Katz.

After establishing the driving core, Katz created a tiered support system to build teams around them. He contacted a few Grand Circuit trainers to be $10,000 platinum sponsors and paired them with the drivers.

“Marvin gave me a call, and Marvin’s a long-time client of mine, so he called to ask if I’d be interested and I said, ‘Of course,’” said Alagna. “[Tetrick] and I have a connection, of course, through Captaintreacherous and we came from Illinois together and we’ve been friends a long time, so it was just a natural pairing for sure.”

Gold sponsors for $5,000 were added to each team as well. Deo Volente Farms on Team Dunn, Team Gingras has Concord Farms and Marcus Melander, Julie Miller and Linda Toscano are Team Miller and Hogan Equine Clinic rounds out Team Tetrick.

“Julie Miller, I think, had the best comment, ‘I’m going to go with David Miller because I like Miller,’” said Katz.

On July 3 at The Meadowlands, a blind draw was held to pair the charities with a team. The combinations are:

“We’re so happy to be involved with the Special Olympics of New Jersey,” said Alagna. “They’ve been great. Social media-wise they’ve been doing their part. They’ve been to the racetrack. I’ve seen them there quite a few nights when I was warming up. They holler at me over the fence and I talk back to them, so it’s good that they’re not just there for one night. That they’re very involved in the process.”

Katz wanted it to be New Jersey-based trainers, drivers and sponsorships because the benefits were going to be in New Jersey as well.

“I had numerous conversations with Jeff [Gural], he’s a friend and I’ve known him for a long time and have great respect for him and what he’s done for the industry,” said Katz. “And The Meadowlands stepped up and became a corporate sponsor and through Jeff, Jason [Settlemoir] and myself, we were able to get FanDuel to become a corporate sponsor as well.”

With the $25,000 diamond sponsorships from both The Meadowlands and FanDuel, the total pledged amount to date is $120,000.

The remainder of the money will be raised with a stallion breeding auction on Wednesday, Oct. 6 at 3 p.m., prior to Session 2 of the Lexington Selected Yearling Sale. Katz appreciates both sales manager Randy Manges and sales manager/director of operations David Reid for all they do to make this possible.

“The Lexington Selected Sales Company role is providing the venue. The sales company also pays for the cocktail hour and there are no fees associated with the selling of those shares. It’s all charitable,” said Reid. “So whatever proceeds are raised, the sales company does it gratuitously for the challenge as well. It’s a good deed for the industry done by the Lexington Selected Sales Company.”

The cocktail reception from 2-3 p.m. prior to the stallion auction will be broadcast live by Harness Racing Update on Facebook and YouTube and will include interviews with some of the participants.

The eight stallions and their donors are:

“Hopefully, people are willing to do a little bit extra because it is for such a great cause,” said Alagna. “[Captaintreacherous] has been a popular stallion. He’s proven it on the racetrack and to be able to secure a breeding early for a breeder is never a bad thing.”

The winner of the Challenge is determined by accumulating points in three categories:

2 – Fan Voting (voting for a Team can be done once a day at https://www.playmeadowlands.events/bc. The team with the most votes will receive and additional 100 points. The second-place team gets 75, third gets 50 and fourth gets 25).

The Meadowlands will post the standings starting on Friday, Oct. 1, giving the teams a chance to push voting through the end of the competition.

The Challenge standings will be finalized following the last Challenge race on the second night of the Breeders Crown Finals on Saturday, Oct. 30 and presentations will be made that same night to the charities.

Moira Fanning, Hambletonian Society director of publicity/chief operating officer, has worked with Katz on the Charity Challenge and knows how much hard work he’s put in.

To date, the Breeders Crown Charity Challenge has donated over $400,000 to charity and Katz believes this could be their best year yet.

“It’s just fabulous, the response from within the industry,” said Katz. “And I want to emphasize that no one that I called refused me. No one. That speaks to the generosity and the commitment of the people in the industry. They’re generous with their time, their efforts and their money and they should be applauded. They’re the heroes here.”

Following the 2020 Challenge at Hoosier Park, Katz was looking to take a step back and hand off the ball, but it didn’t quite go the way he planned.

“John Campbell coined a phrase that I really like,” said Katz. “I would tell John my pink slip’s in the mail and he said to me ‘Marvin, the mail ain’t what it used to be.’ So, he keeps telling me he hasn’t received my resignation. I’ve already tendered my resignation, but he’s got a hearing problem and a mail problem.”