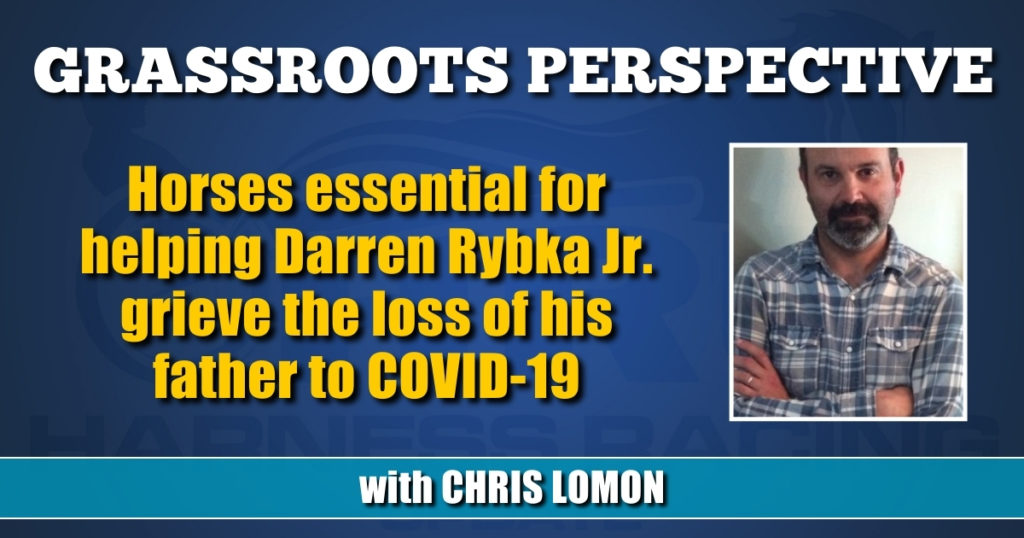 Horses essential for helping Darren Rybka Jr. grieve the loss of his father to COVID-19

In the toughest of times, Darren Rybka Jr. knew he could count on the horses for comfort.

“When you walk in the barn in the morning and see you their faces looking at you, there’s really no way you can ever be mad or feel sad,” said the 27-year-old Rybka Jr. “They don’t ever say a word, but they always find a way to lift you up.”

“He was a great father and a great person,” said Darren Jr. “He was always there for us, always encouraging us in whatever we did.”

After graduating from Ichabod Crane Central High School in 1984, where he was a four-sport athlete, Big D, a native of Hudson, NY immediately enlisted in the United States Army where he served until 1987, doing a tour of duty in Korea. Prior to his passing, the elder Rybka was Senior Project Manager with Creative Sports Concepts, a company that installs hardwood and synthetic athletic flooring, outdoor tracks, playgrounds and athletic equipment.

His meticulous ways served him well in every aspect of his life, including his time as a standardbred trainer and owner, where he plied his trade at racetracks across the U.S. northeast.

That love of horses and horse racing was handed down to his sons, Darren Jr. and Steven, who took to the sport with wide-eyed wonder at an early age.

As the years passed, the boys’ passion for racing continued to grow. Through that shared bond, not only did they get to spend time with their father, they also got to talk shop, celebrate wins, and pat each other on the back after a tough loss.

Both Darren Jr. and Steven eventually followed in their father’s footsteps, finding success in the very same roles their dad once held.

The siblings haven’t only shared similar paths. These days, they share the same workspace.

And, unlike their younger days, the odd scrap and subsequent scrapes are a thing of the past.

When they do happen to each have a horse in the same race, the exchange of barbs and talk of bragging rights fills the shed row.

Yes, sibling rivalry still very much exists between the Rybka boys. These days, the only thing that gets bruised is an ego.

“We definitely get along a lot better than we did as kids. It’s nice having Steven in the barn with me. He has five horses of his own. Whenever we do end up in the same race, there’s a little smack talk going on the week before and the week after.”

Rybka Jr. has always been able to talk the talk.

Working in the paddock during his high school days, he displayed a comfort and confidence around horses that others quickly picked up on.

Heidi Rohr and Jimmy Nickerson, who at the time were running their operation out of Middletown, NY, but racing at Saratoga and other racetracks, certainly took notice of the young kid.

When the pair made the full-time move to Saratoga, Rybka was asked to join them as their groom.

Fast forward to the present, nearly 10 years after accepting the groom gig, the former helping hand is thriving in his role as assistant trainer to Nickerson.

Two years ago, when Nickerson was seriously injured in a car crash, Rybka stepped up and led the operation in the veteran conditioner’s absence.

It certainly wasn’t luck that kept things running smoothly, but Rybka is anything but boastful about his contributions.

“Jimmy has been like another father to me throughout my life. When he got hurt, I had been working for him long enough that I felt I could step in and do it. When you are around someone for so long, you know how they work and how they go about doing things each day. The horses raced well when he was healing up and I hoped that helped in his recovery, that he didn’t have to worry about anything.”

Much of what he learned from his father and for Nickerson has helped Rybka Jr. in his own training life.

Career-wise, it has been a memorable 2021 for the now 27-year-old horseman.

He has two horses of his own, while retaining his second-in-command status with Nickerson.

“It’s probably the best year I’ve had training my own. At the beginning of the year, I had a trotter named Stealing. I raced him seven or eight times, he won three, and he never missed the board, before he got claimed off me at Yonkers. He was a special horse for me because it was the last one my dad and I bought together before he passed away. Every week, that horse came to call and raced hard.”

His current star is a pacer by the name of Real Kid.

The 8-year-old son of Real Desire has racked up plenty of miles over a career that began in June 2015.

“He won on August 14 at Saratoga. He’s just like Stealing. Every time you put him behind the car, he tries as hard as he can. He never throws a bad race. Those two have really stood out for me this year.”

Having already established several personal-best marks this year, the future, short and long term, appears to be promising for Rybka Jr.

Whenever he does look forward, he also looks back, specifically, to call upon the advice he’s received from two particular people.

“I started paddocking for Jimmy when I was 14 and I learned a lot from him. I also learned a lot from dad too. I guess the one thing that has always stayed with me from my dad is to never give up on the horse. He always encouraged me about trying new things and not getting down. I found that out early on, that there are a lot of peaks and valleys in racing. You have to take the good with the bad.”

“I’m getting a little better,” Rybka Jr. said with a laugh. “I still get frustrated, but it’s not as bad when I was younger. When they win, it makes you proud of the work that you’ve done to help get them there. When they don’t do well, it pushes you to work to find a way to get them to succeed. When you get down, you just remind yourself there’s always something to look forward to.”

For the man whose plan is to, one day, have a stable of his own, it’s the faces that peer out of the stalls at him every morning.

“Being around the horses, it makes you feel good. They are always there for you. If you’re having a bad day, the moment you see those faces looking at you… they put a big smile on your face. I know I’ll never take that for granted.”