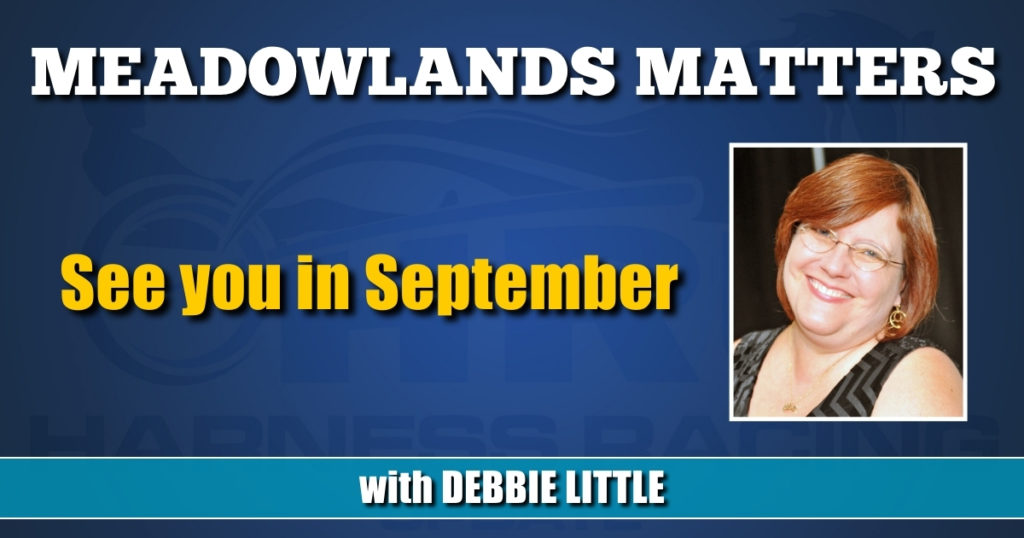 See you in September

The Meadowlands is usually dark in September, but for the second straight year, thanks to COVID-19, they’ll be back to work on Labor Day weekend.

In 2020, following a three-month, sport-wide pandemic shutdown, The Big M raced some of those cancelled dates in September. This year, they are doing it to make up for dates that typically would be raced on Thursdays in December.

The Thursdays were primarily raced in the past to accommodate corporate holiday parties but since dates needed to be arranged before the end of last year, the track erred on the side of caution.

“Not knowing what the outcome would be of the pandemic, where we would be at, it was important to us to be able to get a schedule out there,” said Jason Settlemoir, chief operating officer and general manager of The Meadowlands.

Racing will take place every Friday and Saturday in September with a 6:20 p.m. post time and, as it turns out, the track recently decided to add in a couple of Thursdays in December.

“With the eliminations for the Breeders Crown and finals for the Breeders Crown, you’re eliminating overnight races, so we wanted to give the horsemen an opportunity to be able to race those additional races,” said Settlemoir. “It also has to do with our group sales. We picked up those first two Thursdays simply because they’re the best two days to add onto our calendar.”

The last of the six legs of the Miss Versatility for trotting mares kicks off on Friday, Sept. 3.

The top eight point-earners entered can race in the final, which will be contested at the Delaware (OH) County Fairgrounds on Little Brown Jug Day, September 23.

The Meadowlands will play host to all the legs this year since Woodbine Mohawk Park was unable to race in May.

When Dovescry, winner of three legs, is the current points leader. Next Level Stuff and Manchego, who have each won two legs, are ranked second and third, respectively.

The second and third legs of the Kindergarten Series for 2-year-old males and females of both gaits will be on Friday, Sept. 17 and 24, respectively.

The fourth leg of the series takes place on Saturday, Nov. 6 with the finals the following week.

The excitement in September won’t just be on the track as The Big M hosts special events every Saturday night of the month.

The events will get a strong start with the third edition of a fan favorite, the Wiener Dog Derby, on Labor Day weekend.

The dachshunds dash down the stretch between the races and up to 80 eligible entrants will compete in eliminations. A maximum of eight will qualify for the final.

“I’ve grouped them by weight for this year,” said Rachel Ryan, director of marketing and event operations for The Big M.

All competitors must be properly licensed and be up to date on all shots. Ryan checks all paperwork to make sure that the entrants are actually registered as dachshunds and had a starting box built and the plan is to use it this year.

The fifth annual Craft Beer Fest is scheduled for Sept. 11.

There are a limited number of VIP tickets for $85 each, which include access to a VIP lounge, food buffet, exclusive tastings and an additional hour of sampling.

Check www.playmeadowlands.com for a complete list of more than 30 participating breweries and cideries and all event details.

The fifth annual Battle for the Best Burger takes place on Sept. 18.

The event starts at 5 p.m. in the Backyard and features top local burgers from area food trucks and restaurants. A full list of participants can be found on the Meadowlands website.

Judging will take place at 8 p.m. and will be based 60 per cent on taste and 40 per cent on presentation. Two lucky fans will be selected to be judges.

The month ends with the Big M’s sixth annual Chili Cook-Off on the 25th.

The grand-prize winners in the salsa, homestyle chili and chili verde categories will each earn a spot in the International Chili Society’s 55th Annual World Championship Chili Cook-off.

Fans are encouraged to try the chili from available free samples and vote for the people’s choice champ. Voting begins at 8 p.m.

The cook-off takes place in the food court and outdoor east apron.

Meadowlands’ president and chief executive officer Jeff Gural knows how important marketing is to getting people to come to the track and his staff has found a way to put on these extremely popular events even though they are not based on the racing.

“In the casino world, we spend a lot of money on marketing,” said Gural. “Everything is marketing. And horse racing marketing is almost nonexistent. We do some stuff at The Meadowlands, but the only things that worked were things like camel racing, wiener dog racing and food trucks.”