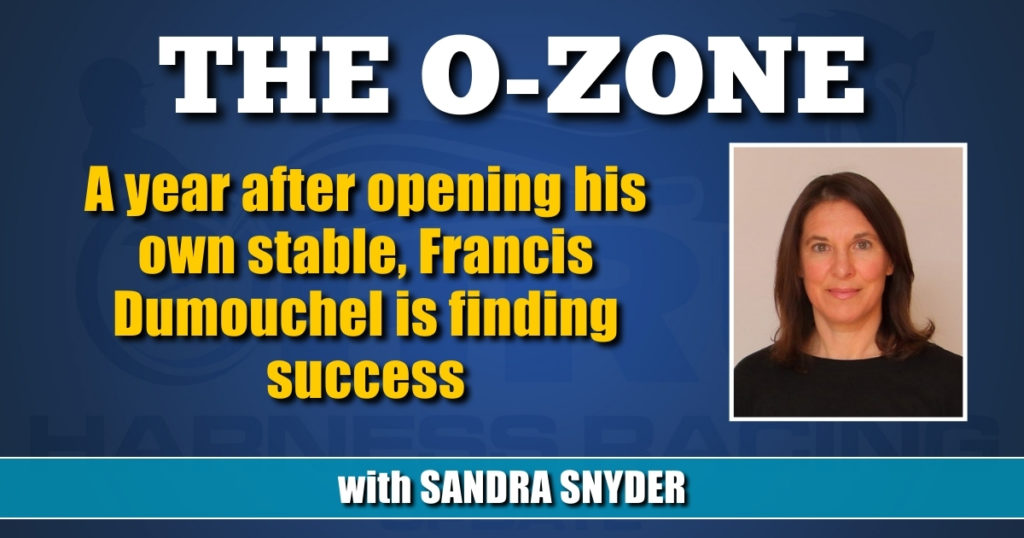 A year after opening his own stable, Francis Dumouchel is finding success

A year ago, Francis Dumouchel gave up his job as an assistant trainer with the Blake MacIntosh stable and purchased five Ontario-sired yearlings, launching his career as a full-time standardbred trainer.

With a record of six wins, nine seconds and 12 thirds in 36 starts, for earnings of $124,686, the launch can be considered an unqualified success for the 30-year-old horseman, who spent the last decade learning the ropes of a business that first caught his attention as a teenager.

“My mom, her brother and her sister they had a farm, and Gerry Demers was stabled there. That’s how I got kind of hooked on harness racing, because I was going to school and then I quit school to work for Gerry,” said Dumouchel, who hails from Papineauville, QC. “I probably worked for him for five or six years and then I moved to Toronto with him. And then he went back home, and I decided to stay here. From that time on I worked for different trainers. I worked for Dave Menary, Luc Blais for a little bit, Tony Alagna in the summer, and then finally I worked for Blake MacIntosh. I worked for Blake for probably five years, the first two years I was a groom and the last three I was his assistant trainer.”

In 2017, Dumouchel purchased Rose Run Unclebuck (Uncle Peter–Tameka Seelster) in partnership with Sophie Bourgeois’ numbered company 9174 7998 Quebec Inc. of St-Janvier-Mirabel, Sylvain Descheneaux’s Ecurie CSL of Sorel-Tracy and Brian Paquet of Quebec, QC. Dumouchel trained the gelding, and the additional young horses he acquired in the next two years, alongside the other MacIntosh trainees and credits his employer’s generosity with his current success.

“Blake was really good to me. He’d let me train my babies, because I do mostly babies, I’ve just always liked doing babies, so I’d buy one or two babies and he’d let me train my babies in his sets,” said Dumouchel, who currently calls Embro, ON home. “I think it helped me a lot because you know how it is, it’s hard to train just one baby on his own, so having Blake letting me train with them was a big help for most of them.”

In 2019, Dumouchel, Bourgeois and Descheneaux acquired Twin B Sunkissed from the Standardbred Horse Sales Company’s yearling sale in Harrisburg, PA, offering up $20,000 for the daughter of Sunshine Beach and Western Heat, and the filly’s 2-year-old campaign was the catalyst for the trainer’s change in employment status. The filly won an Ontario Sires Stakes (OSS) Gold Series leg, finished second in her Eternal Camnation division and Shes A Great Lady elimination and banked $126,112.

Off that success, and with the additional support of fractional ownership group Own A Standardbred, Dumouchel purchased five yearlings last fall. Three of the five have already started in the OSS program and cashed a provincial paycheck.

Two-year-old trotting colt Luca Hanover won a division of the July 15 Grassroots season opener at Woodbine Mohawk Park and then jumped up to the Gold Series level where he finished third on July 29 and second on Aug. 19. The son of Resolve and Lady Bar makes his fifth lifetime start in a $62,307 Champlain Stakes division on Thursday (Aug. 26 – results unavailable before the deadline for this column).

Twin B Sunkissed got off to a slow start this season, battling tie-up issues, but the sophomore pacing lass was a 1:52.3 winner in Grassroots action at Rideau Carleton Raceway on Aug. 22 and makes her ninth sophomore start in the $169,550 Simcoe Stakes at Woodbine Mohawk Park on Saturday, Aug. 28.

“We had high expectations of her at the beginning of the year. To be honest, she’s been kind of disappointing until her last two starts,” said Dumouchel of Twin B Sunkissed. “They always say it’s all about peaking at the right time, so hopefully she does. She’s probably the best she’s ever been right now, her last two starts, so hopefully she can keep going in this direction.

“Luca Hanover, I think he’s a nice trotter. He was a June foal, so we don’t really want to push him. Whatever he does this year is kind of a bonus, really. I’ve always told my owners he was going to be the one telling us if he was ready or not to race as a 2-year-old, because he’s not that big and he goes through growth spurts. I don’t want to over race him, seven or eight starts for him this year would be plenty.

“That Twin B Jammer colt, he’s racing in the Grassroots, I think he’s the most talented one we have in the barn right now. Sylvain Filion drives him, and I was telling Sylvain when he first drove him, I said, ‘This horse probably has the speed of a 3-year-old right now, but he has the brain of an 18-month-old.’ I think once he figures out what he needs to do he’ll be a nice colt. He’s nice enough already, he’s a Grassroots colt, you can’t really complain with a Grassroots colt, but I think once he puts everything together, he could be a really nice colt.”

The other two members of his 2020 yearling class, Sportswriter fillies Twin B Fabulous and Windy Report, have been enjoying a summer vacation but will soon return to training in hopes of making their debut later this fall.

Dumouchel is stabled at the former Dreamfair Farm, just outside of Ingersoll, ON, along with Maddi and Travis Henry and he relies on the couple’s formidable skills to keep his horses happy and healthy. Maddi works with the horses on a day-to-day basis and serves as their equine massage therapist as needed. Travis is a critical set of hands in the jog cart or race bike when the babies are training down through the winter. The trio is assisted by a local young man, Gary, who is new to horses and harness racing, but has become an essential part of the team over the last year.

Looking ahead, Dumouchel hopes to return to the yearling sales this fall but said 15 horses is his maximum stable size.

“When you train horses, you kind of have to find out what’s the right number for you. Some people can deal with 30, 40 horses and some people can only deal with five,” Dumouchel said. “It’s all about finding the number that works for you, where nobody misses anything. You want to make sure they all get taken care of like they’re all world champions.

“Same with the owners, you want to keep the owners happy. I find it’s a lot easier if you kind of have the same owners and they all get along, than if you have a couple of owners that disagree on stuff. My owners are great, and my staff is great, so it kind of makes everything a lot easier. If anything, I’m the one that gets grumpy when we have a bad night. The staff and the owners make it easier the next couple days on me. I put enough pressure on myself, and the owners, they know I’m just as disappointed as they are when the horses race badly.”

At present, Dumouchel owns a share of all seven horses in his barn, Ecurie CSL owns a share of six, Own A Standardbred 2021 owns pieces of five and 9174 7998 Quebec Inc. and Travis Henry own shares of three. Brian Paquet still owns a piece of Rose Run Unclebuck, whose current role is paddock babysitter for Luca Hanover.

With Grand Circuit and Ontario Sires Stakes post season action on the horizon, the partners will be looking forward to seeing what the second half of Dumouchel’s first season as a full-time trainer holds.