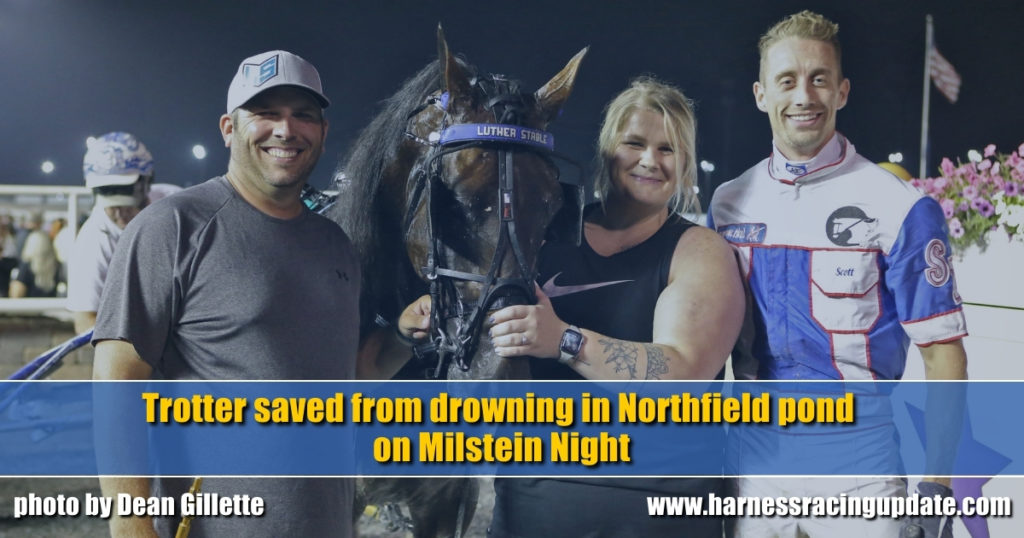 Trotter saved from drowning in Northfield pond on Milstein Night

Thanks to the quick action of trainers Virgil Morgan, Todd Luther and others, a disastrous start to Saturday’s Milstein Memorial Night at MGM Northfield Park was narrowly averted when 2-year-old trotter Creatine Star spooked before the first race and went into the infield pond, nearly drowning.

On a night when MGM Northfield Park patrons enjoyed several great on-track performances, including three new world records, it was the selfless actions of a couple of horsemen and track employees that saved the night and the life of a promising 2-year-old trotter.

The stunning events started as the field of seven freshman colt trotters approached the start for the first race, a $40,000 division of the Ohio Sire Stakes on Saturday’s (Aug. 14) Milstein Memorial card.

On Blueberry Hill, driven by Chris Page, was headed in the wrong direction and needed the assistance of the outrider to turn, causing a delay in the start.

Dean Gillette | Less than 24 hours after winning the $300,000 Dan Patch at Harrah’s Hoosier Park with Catch The Fire, trainer Todd Luther (left) jumped into the infield pond at MGM Northfield Park to help save 2-year-old trotter Creatine Star from drowning.

Mark Hall / USTA | Creatine Star is trained by Virgil Morgan, Jr., who also jumped into the pond to help save the trotter.

Driver Brett Miller tried to turn Creatine Star, who was already behind the gate, around due to the restart. The son of Creatine became spooked, reared up and dumped Miller to the track. Creatine Star then went on a gallop for almost a quarter of a mile before the gelding ran full speed into the MGM Northfield Park infield pond.

“Everything happened so fast, but yet it was in slow motion,” said Virgil Morgan, trainer of Creatine Star.

The gelding was quickly in over his head and was in need of assistance.

A member of the MGM Northfield Park track crew, the outrider, Morgan and fellow trainer Todd Luther ran to the water’s edge and all entered the murky water from various points around the pond to aid the trotter.

“When I first jumped in, you could see him underwater, trying to get up,” said Luther. “When I got there, he started to turn towards the bank. A member of the track crew held his head above the water. I started stripping off the equipment – the bike, the harness, the crupper – to get the weight off. I’m not sure how deep it was, but I am sure we weren’t touching bottom.”

Luther — who less than 24 hours earlier won the $300,000 Dan Patch at Harrah’s Hoosier Park with his pupil Catch The Fire — is a former member of his high school swim team.

“You don’t think about it at the time, you just react. I didn’t know whose horse it was at the time. I had a horse in the third (race), so I was in the paddock. I saw the loose horse and when I saw him go in, I ran over. It was just instinct. I just couldn’t stand there and watch a horse go through that. I am sure others would have done the same thing.”

With the assistance, Creatine Star was able to get to shore and eventually walked back to the paddock under his own power.

Last weekend’s events were eerily reminiscent of an incident on March 25, 2019 at Miami Valley Gaming and Raceway. The only difference was the final outcome. Gelded pacer He’s A Perfect 10 drowned despite efforts to save him.

“After Miami Valley, the Ohio State Racing Commission, the OHHA (Ohio Harness Horsemen’s Association) and the tracks should have worked together to developed a protocol to prevent such an occurrence from happening again,” said Morgan.

“We recently removed the vegetation around the pond and dredged it. This work was in preparation for improvements to the drainage and to make the track safer,” said Dave Bianconi, director of racing operations for MGM Northfield Park. “When construction is complete, we will have a barrier erected as a deterrent.”

Creatine Star, who is owned by Carl Howard, Joyce McClelland and Larry Wills, has earned more than $55,000 in just four career starts – thanks mostly to a second-place finish in the $150,000 Next Generation event on July 2.

Morgan reported that Creatine Star is “doing well, and has been jogging and eating well.”

Creatine Star is expected to make his next start Saturday (Aug. 21) in the final leg of the Ohio Sire Stake at Eldorado Scioto Downs. He’ll need a victory to get into contention for the $300,000 OHSS Final on Sept. 5 back at MGM Northfield Park.

While Morgan looks towards the future, he also is taking a grateful look back.

“It might have been a nightmare, but we ended up with the best result. We just need to make sure this never happens again.”