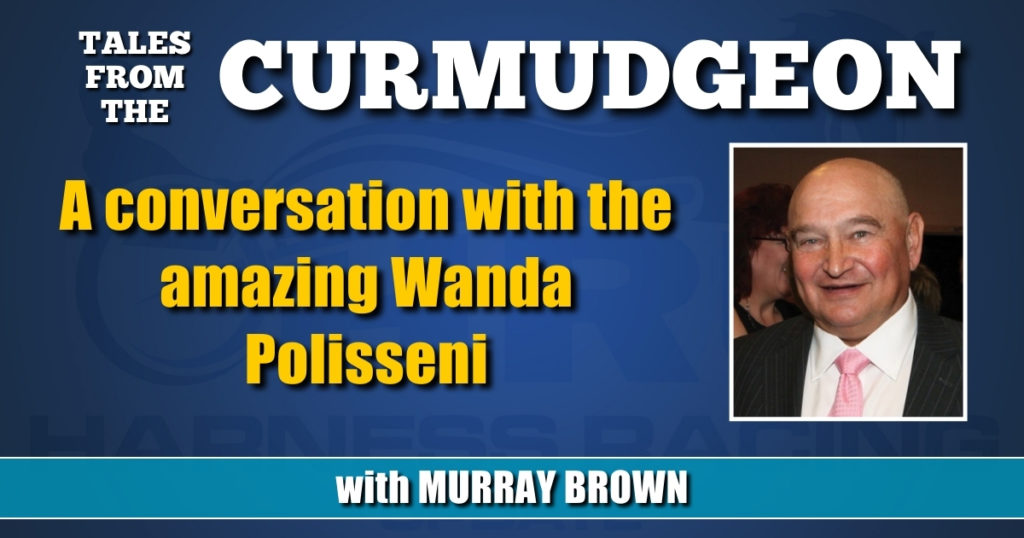 A conversation with the amazing Wanda Polisseni

Last week was the first time I’ve had the privilege of having any sort of extended conversation with Wanda Polisseni. What an amazing lady!

She is best known in the harness racing fraternity as the proprietor of Purple Haze Stable and its equine charitable offshoot Purple Haze Standardbred Adoption program.

As much as she loves her horses and very few among us love them as much, she loves her family even more. She and her late husband Gene had four children and now have five grandchildren aged 22 through 27.

No one, especially a parent, should go through as much heartbreak as has befallen Wanda. She lost her daughter Kimberly at the age of 18 due to a drunk driver. Her husband Gene, one of the founders of the payroll service giant Paychex, passed after 40 years of marriage and just this year her son, noted artist and philanthropist Greg Polisseni, left us at the young age of 50.

“How are you able to overcome such tragedy?” I asked her. “You don’t,” she said. “You try to live with it. I miss them all enormously and will never get over their loss.”

Our conversation turned to one of the great loves of her life — horses.

How did you get involved with horses?

“We had a 540 acre farm. Our next door neighbors raced horses at Batavia Downs and periodically boarded their horses with us. I watched them and fell in love with them. I said to myself that one day I was going to own and race some myself. I never realized how many that would possibly involve. Initially, I bought six horses through Clint Galbraith. That didn’t work out too well. Subsequently, I had some other trainers until I met Trond Smedshammer with whom I still have all my standardbreds. I actually also owned some thoroughbreds with Trond as a partner.”

You mentioned the thoroughbreds, Wanda. Do you still own and race them?

“Indeed I do. Each year I have about 100 horses in training. There are pretty much evenly divided between standardbreds and thoroughbreds.”

Which do you prefer?

“I love them both. But they are quite different. We race the trotters and pacers much more often than we do the runners. They both have their plusses. I love the pageantry and beauty of the thoroughbred business. I hate that they can be so fragile. There is very little that can be more heart breaking than seeing a horse that one owns, or actually any horse that anyone owns, break down. Unfortunately, you see it far more often with the thoroughbreds than you do with the trotters and pacers.”

Is there anything you advise your trainers about?

“I have one golden rule. No horse of mine is to be raced that is lame or sick. I feel responsible for them once I own them. Good or bad, I have a great responsibility to them. If they reach the point where they cannot race any longer, it becomes my responsibility to make sure that they live out their lives in relative comfort. Of course, I realize that some horses reach a stage where they are in constant pain for which there is no end in sight. In that case I will never allow then to go to the Amish where they will endure a difficult life or to be sold for meat. In cases such as that I believe they should be euthanized.”

Let’s speak about Trond Smedshammer and your relationship with him.

“I believe we are two kindred spirits. We think alike and have the same philosophy about our horses. We only want to race them when they are fit and competitive. I speak with him just about every day. It would have been very difficult to get through the loss of Greg if I didn’t have Trond to fall back upon.”

Do you make any of the decisions regarding the purchases of your horses?

“I suppose that I ultimately do in writing the checks. But I leave almost all of it up to those whose hands the horses are going to be in. They are the professionals. I shouldn’t be owning horses if I didn’t have complete trust in who will be training them.”

How do you go about determine how much you are going to spend?

“I don’t have partners and I don’t want to have partners. So my expenditures are somewhat limited by going against the partnership groups that are so prevalent in buying yearlings today. They can easily afford to pay large amounts because the risk is spread among several people.”

You say you don’t want partners. Why?

“Because partnerships beget bickering and second guessing. That’s not who I am and I don’t want any part of it. When I give my horses to someone, it’s because I respect them and their professionalism.”

How many horses do you have going into the year?

“I usually start with around 100, fairly equally divided between the two breeds. Most of them are yearlings. It’s somewhat ironic that I don’t strongly believe in racing 2-year-olds — especially not racing them hard. But I realize that it’s an absolute economic necessity. In a perfect world, they would be saved until they are most physically mature, but the economic structure of the business would likely collapse without them.”

Do you have any geographical preference with the horses you select?

“I live in New York. I believe in supporting my home state which still has an excellent program, so most of my purchases are New York breds. On the other hand, I also love racing on the Grand Circuit so I buy a number of yearlings from other states.”

I notice that most of your horses are trotters. Do you prefer them to pacers?

“Not really. I buy mostly trotters because that’s what Trond prefers and excels at. I believe that he is one of the world’s great horsemen. Sometimes I don’t believe he gets the respect he deserves. He makes all the decisions — even those where he chooses to get someone else to drive. I’d be perfectly satisfied to have him drive all the time. However, he thinks that sometimes in the bigger races, he could be handicapped by not getting the breaks that others may get. In any event I am perfectly satisfied with any decision he makes.”

It’s somewhat unusual in this business in that everyone I know that knows you speaks well of you. I have never heard a bad word uttered about you and the way you do business.

“It’s actually quite simple. Most people are nice. I treat people as I would hope to be treated.”

How do you feel about winning? That’s the name of the game isn’t it?

“Of course I enjoy winning, but that isn’t all there is to it. As long as the race goes off well and all that have competed in it return healthy is what is most important to me.”

What possessed you at the age of 80 to venture into the Purple Haze Standardbred Adoption Program?

“Simply put, I want to save every horse that I can. I have the means to do it, so I decided to. I don’t expect accolades. I try to treat everybody in the same manner that I would like to be treated.”