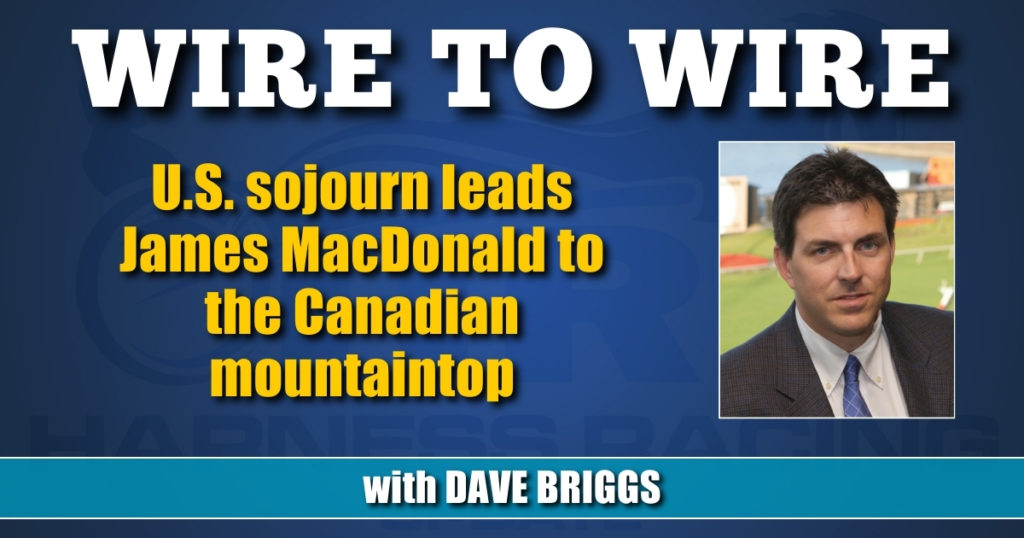 For James MacDonald the route to the top of Canada’s driver mountain first involved a lengthy detour in the United States.

MacDonald, who leads Canada in both wins (123) and earnings ($2,362,881) through Aug. 11, said a five-week stint driving in the U.S. from May to early June, while racing was locked down in Ontario due to COVID-19 restrictions, was key in keeping both his mental and physical game sharp.

Dave Landry | James MacDonald (at Grand River Raceway on Aug. 2, the day he won the Battle of Waterloo with Betterhavemymoney) is driving extreme power with extreme confidence.

“I went to the States when we were locked down, and I just got on a bit of a roll down there… When I came back, I was in a good mind frame,” said MacDonald who also tops the Woodbine Mohawk Park driving standings in both wins (108) and earnings ($2.055,475) through Aug. 10. “The more you drive, the better you feel. A lot of other people weren’t driving … I was kind of like a horse, I was tight and they were short. I was getting a lot of good horses to drive right off the bat (when I returned to Ontario) and then, the better you do, the better horses you get and it just kept snowballing even more. It kept snowballing into a great group of babies and I’m getting lots of good horses to drive. The confidence is high and hopefully I can keep riding it for a while.”

In 149 pari-mutuel starts at The Meadowlands, The Downs at Mohegan Sun Pocono, Harrah’s Philadelphia and Yonkers Raceway, MacDonald posted a solid record of 17-17-19 in 149 starts.

“Woodbine Mohawk Park is probably one of the toughest driving colonies in the world, but if you go down and race against Hall of Famers – Brian Sears, Dave Miller, Tim Tetrick — and my brother Mark (MacDonald) day in and day out, and if you’re having some luck, it puts you in a good mind frame,” MacDonald said.

“I guess it could’ve went one way or the other. You could go down there and get beat up and then you come back with no confidence, but I had some luck and I had a great time down there with a great bunch of guys. Luckily, it’s been able to translate into a lot of success when I came back up to Canada.”

Leaving his young son, girlfriend and Ontario behind wasn’t easy.

“It was really tough. I didn’t want to go and I have my girlfriend here. It was hard on everyone, COVID. Especially in racing, there wasn’t a whole lot you could do. It was a tough time on everyone. My little guy, I wasn’t able to see him the last two weeks before I went down to the States because he had got COVID. It was six or seven weeks that I had to go without seeing my little guy. That was really tough,” MacDonald said. “I’m happy I did it, obviously. It was good for my racing and staying confident and staying sharp in the bike, so that’s a big part of my success this year. It was tough at the time, but I’m happy that I did it.”

The time away also made MacDonald realize just how fortunate he is to race in Ontario.

“I know all the guys that went down there, we were happy to come home. We live a great lifestyle here in Canada. It’s a great country and we’re fortunate to have great racing at Mohawk,” MacDonald said. “Even today, I went and trained in the morning and now I’m home and I’m going to go golf today – I’ve got the day off today. (The U.S.) guys, it’s just run-and-gun all day, every day. Most days you’ve got to squeeze in time just to eat. It’s a lot different lifestyle and you put a lot of miles and strain on your body just in your car and on your mental state.

“It gave me a really good appreciation for how good we have it here in Canada.”

MacDonald said he’s particularly pleased to be driving a lot of talented 2-year-olds this year, such as Battle of Waterloo winner Betterhavemymoney, Aviator, Prohibition Legal, Silver Label and Twin B Archie.

“It sets you up well for their 3-year-old years,” he said. “I’ve just got to try and manage them the best I can and try to keep them as brave and happy and winning. The trainers are obviously doing a great job and that makes my job easier.”

“You never know which horses are coming (to race at Mohawk) and who is bringing them, but I got to meet pretty much all the trainers (in the U.S.) and had a good rapport with them,” MacDonald said. “Hopefully, if some more people need drivers on their top stake horses. It would be a real honor to get some of those and just get a crack at the big ones, those are the ones that really count.”

After all, MacDonald’s confidence and success are both at all-time highs at the moment.

“People say I’ve been a lot more aggressive lately, but when you’re driving those favorites in a lot of races and your confidence is high, then you want to put them in a spot to win and being aggressive is usually the best spot to race a favorite,” he said. “I’m really hoping that it’s snowballing into some of these Grand Circuit races (in September at Woodbine Mohawk Park) because, at this point, they look like the ones to beat in Canada. You never know what’s coming up or what’s around, but I couldn’t be happier with the group I’m driving right now.”