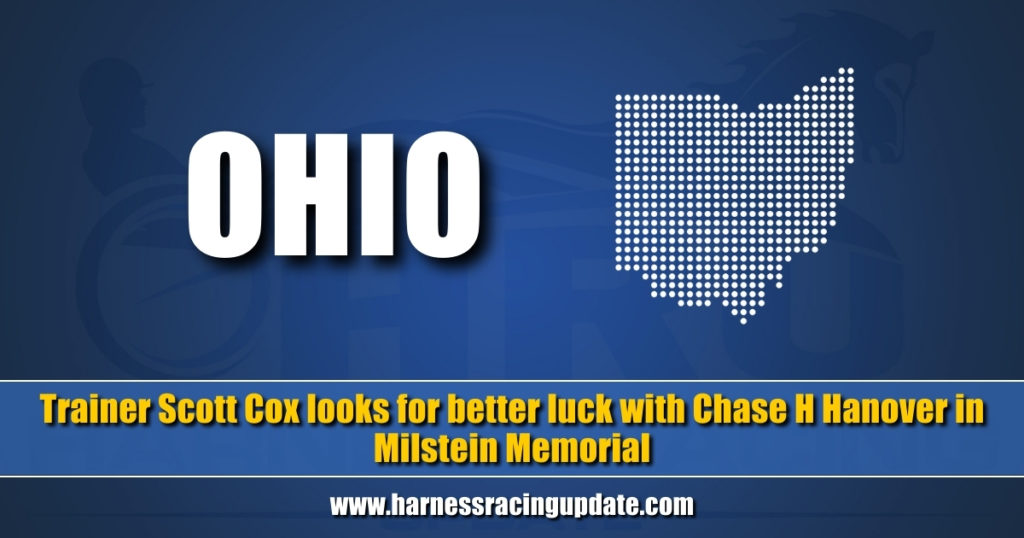 Chase H Hanover, who will be driven by Ronnie Wrenn, Jr. from post #8, continued his streak of poor post position draws.

“I have been waiting for (his luck) to turn around,” said Cox. “Someday it will turn around. Bad post positions and bad spots. Hopefully, it will change soon.”

The gelded son of Captaintreacherous—Calgary Hanover is co-owned by Jason Ash of Delaware, OH and Cox, who has recorded more than 1,100 career training wins and $7.7 million in earnings, mostly at Northfield Park.

“Despite not getting a purse check, I thought his last start was one of his better races,” said Cox. “He finished strong [last quarter in :26.]. He’s done well. I don’t think we have over-raced him. He has been coming out of those races well.”

Combined with his freshman season performance, he has been on the board in 15 of 20 career starts and has amassed over $383,000 in earnings.

Chase H Hanover, who trains at Sahbra Farms in Streetsboro, OH, will be making only his second purse start in the Buckeye State. Last year, he captured the $54,206 Standardbred at the Delaware County Fair on Jug Day in a world-record-equaling 1:51.1.

“We didn’t overstake him a year ago. We kind of picked our spots. This year we staked him a little bit more,” Cox said.

The morning line favorites in the Milstein are Charlie May (Brett Miller; Post #7) and Water Sports Teen (Joe Bongiorno; Post #2).

Charlie May (5-2 morning line) comes into the invitational off an Ohio Sire Stake and Ohio State Fair wins – in 1:50.4 and 1:51.4, respectively. The homebred McArdle gelding finished first in the Meadowlands Pace final, but was disqualified and placed ninth for interference. He is owned by Don Tiger and trained by Steve Carter.

“It will be an interesting race,” said Cox. “Charlie May is a phenomenal horse.”

The race honors Carl Milstein, who owned Northfield Park from 1984 until his passing in 1999. The Milstein family operated the track until July, 2018.

The Tom Aldrich President’s Trot will feature a one of this year’s top trotters nationally, It’s Academic (Yannick Gingras – Post #8) and a pair of millionaires – Mission Accepted (Chris Page – Post #7) and I Know My Chip (Ronnie Wrenn, Jr. – Post #5). The field of nine has combined for 208 career wins and earnings of $5.1 million.

Winning Ticket (Aaron Merriman) looks to stay perfect on the season in the first $50,000 division of the OHSS for sophomore colt trotters. The gelded son of Triumphant Caviar has earned $164,500 this year while winning all eight 2021 starts for co-owner/trainer Chris Beaver, Steve Zeehandelar, Tim Homan and Jim Burnett.