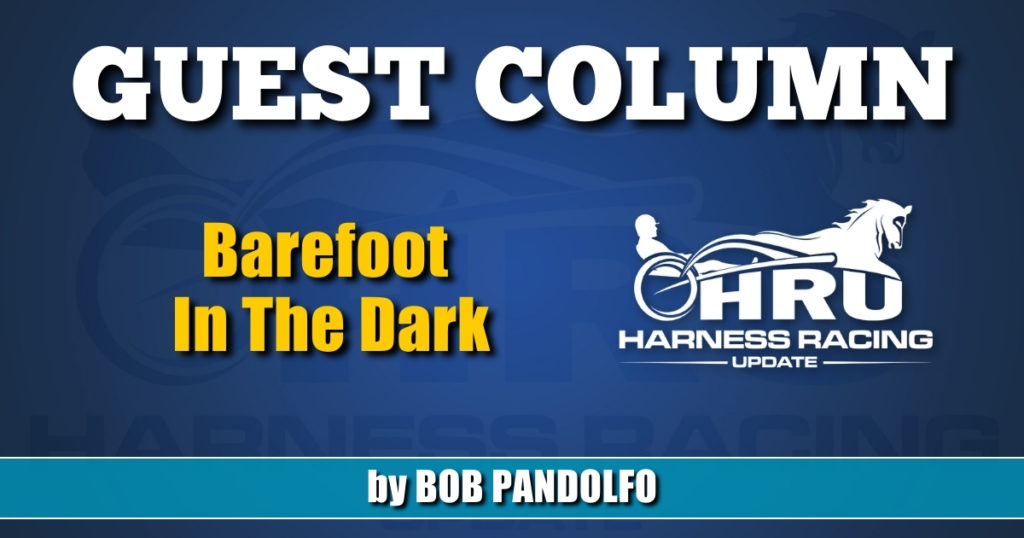 Barefoot In The Dark

Some of you may remember the Neil Simon play Barefoot In The Park. Well, these days, some trotting races may be called “Barefoot and In The Dark,” because some of the horses are racing without shoes and the bettors are kept in the dark.

The first time I remember hearing about a trotter racing shoeless was in 2014. The horse was the late, great, Sebastian K. Trained by Ake Svanstedt, Sebastian K made his U.S. debut at the Meadowlands and went a scorching 1:50.1 mile to equal the track record. Later in the year, Sebastian K lowered the world record to 1:49.1 when he won at Pocono Downs. I interviewed Ake Svanstedt back in June of 2014, shortly after he came here from Sweden. It was obvious that he would be a major force in U.S. racing because of the strong organization he had. That, and the fact that he’s a master horseman.

Here we are seven years later and racing without shoes has become more commonplace. The reason for this is simple – some horses trot much faster without shoes. I really don’t know why, and, frankly, I don’t care.

Last Saturday (Aug. 7) I attended the races on Hambletonian Day at the Meadowlands. It was a great card and I thoroughly enjoyed the day. But, I’m still going to complain.

And here’s Pandy on his soapbox again:

As some of you know, if a horse takes shoes off, it’s supposed to be announced or presented in some form to the public as an “equipment change.” On Saturday, all day long, the equipment changes were electronically displayed on the big screen in the infield.

In the Hambletonian Oaks, which was Race 14, the 7 and 10 horses were “minus shoes.” The 7 horse, Hot As Hill, left and tucked and didn’t show much thereafter. The 10 horse, Iberation, left from post 10, tucked, brushed to the lead and finished second behind the sharp odds-on winner, Bella Bellini. Iberation was 45-1 and was clearly second best in the race. Racing without shoes seemed to help the filly.

In the Hambletonian Final, which was the 15th race, I expected the favorite Captain Corey to be on the “minus shoes” list. But he wasn’t. According to the equipment changes, there were no “minus shoes” in the race. I figured that Captain Corey would be shoeless because I know that Svanstedt likes to race his good ones without shoes in the big events. And why wouldn’t he? He’s had tremendous success with that equipment change.

As you likely know, in the Hambletonian final Svanstedt gunned Captain Corey to the lead in :26 flat, forced tucks, set a hot pace under heavy pressure and drew clear to a handy and impressive win never in doubt. After the race, Svanstedt congratulated the Meadowlands for having the track in good condition and said that he raced Captain Corey with all four shoes off.

That’s great for Captain Corey and the connections. I congratulate them. But the other side of this story is that this “shoes on, shoes off” is getting more annoying than the idiotic “Clap On! Clap Off! TV commercials for “The Clapper” lightbulb device sold in the 1980’s.

This reminds me of when the first “modified sulky” showed up at Roosevelt Raceway in 1976. In some races, only one driver, either Merritt Dokey or Tom Merriman, had the bike. The bike itself was around a second faster than the wood bikes so all of a sudden, Dokey and Merriman became better drivers than the legendary Herve Filion. I was working at Sports Eye and we tried to get the “modified sulky” changes in the track program or at least announced at the track. But it took many months for that to happen and meanwhile bettors at OTB were getting screwed while the professional bettors and people in the know were cleaning up betting Tom Merriman’s horses. The whole thing was a joke and akin to insider trading.

Even if it’s unintentional, a pari-mutuel sport should NEVER hide anything that affects the performance of a racehorse from the betting public. It’s just not good business. This is even more important now than ever because most of the money is being bet online.

Over the past year or so, I’ve noticed that there are younger fans getting interested in horse racing. And, of course, they’re betting on their phones. Let’s not chase these new fans away!

So let’s go over a few things about racing without shoes.

First of all, it appears that some horses go much faster without shoes. So, it’s a performance-enhancing change. There have been studies in Sweden that concluded that horses racing without shoes did go faster, on average.

But there’s more to the story. Studies in Sweden also showed that horses that raced without shoes break stride more often. Researchers at Sweden’s University of Agricultural Sciences (SLU) compiled data from 75,000 races and over 5,000 horses. They concluded that horses go faster without shoes but break stride anywhere from 15 to 35 per cent more often, which results in more interference and disqualifications. I would imagine that it could also cause more accidents.

There’s more info on the Internet if you search but I don’t want to bore people with too much detail. The bottom line is: shoeless horses go faster and break stride more often.

Some years ago at the New York thoroughbred tracks, some trainers were using shoes called “Mud Caulks” or “Turn Downs” to help their horses handle off tracks. Many of these horses grabbed the wet track better and they performed better than they usually did. Well, a few cagey professional gamblers were betting all of these shoe changes and cleaning up. The average bettor was on the losing end, however. So the NYRA banned those types of shoes as a way of protecting the bettors.

Another shoe change that’s perceived as something of a performance enhancer is steel to aluminum, since aluminum shoes are lighter. I honestly don’t have any stats on that, however.

There are several things that don’t sit well with me when it comes to these shoe changes. At least when a newer and faster sulky comes out, gamblers who follow racing closely can see the new bikes on the track. With the shoes, unless you’re Sherlock Holmes, I have no idea how you would know what kind of shoes a horse is wearing, or not wearing.

There are other problems. Here’s a scenario: a trainer takes the shoes off a horse for a stakes race and the horse goes a monster mile and wins. Almost always, the horse’s shoes are back on for the next race. And, this often results in a disappoint effort. I know you might ask, “Why don’t they keep racing them without shoes?” Well, for two reasons. For one, if they raced a horse without shoes every start, the horse’s feet would eventually get damaged. The other reason is that they want to use it to get that extra boost in certain spots.

To me, this is a bad look for racing. A horse is racing okay but not great, finishing second or third, then takes the shoes off and wins big. Then in its next start the horse is 3-5 odds, the shoes are back on, and the horse finishes third and lacks the zip that it had in its prior “shoeless” start. See the problem? The trainer is making an equipment change that he or she knows is going to make their horse go slower. That certainly doesn’t look good.

As far as the equipment change board, obviously if the equipment changes shown to the public are 100 per cent accurate, that helps. But these changes often only appear at the track and internet bettors are kept in the dark. And, many times the changes are wrong, as they were in the Hambletonian.

I’m not a professional bettor, but sometimes I’ll bet a couple of hundred dollars on a horse, usually as a key in exotics but occasionally to win. But if a track is not going to list these shoe changes, I should probably not make a bet at that track. Imagine betting $200 to win on a horse that’s 10-1 odds and some 20-1 shot that couldn’t keep up to your horse last race beats you by a nose and, then you find out afterwards that the horse was “minus shoes”?

It might be time for harness tracks to ban shoeless racing. Personally, I think that this is such a potent performance enhancing equipment change that it should be listed in the program, and that’s not going to happen. What’s more likely is that most bettors will be left in the dark and get screwed. We also don’t need more breakers. Yeah, more horses breaking stride, scattering the field, that’s always fun. How about when the horse you bet gets clobbered by a breaker and then everyone has to wait 10 minutes to find out which horse is going to get disqualified? Isn’t that great? Let’s have 35 per cent more of that.

As a public handicapper, I’m trying to give people a good view of each race so perhaps they can win some money and enjoy the racing. And anyone who knows me knows that I take the Meadowlands picks I put on the USTA website very seriously. But if you’ve read some of my comments or the comments of my colleagues Derick Giwner at DRF Harness or Dave Brower at the Meadowlands, you’ll see that we’re making comments like “check the shoe changes” or “I wonder if he’ll take the shoes off tonight?” People must be wondering, “If these guys aren’t sure, how am I supposed to know what’s going on, I only bet once a week?”

We have to stop making harness racing about everything but the horse. Harness racing keeps sucking the purity out of the sport. We’re going backwards, not forwards. We’re starting to get a handle on the doping, thankfully, but there are still other issues, like faster and longer bikes that create a gap back to the hindered closers and an inside speed bias, and now the guessing game of shoeless horses.

Handicapping and betting should be about, which horse is the best horse? Not, which horse has the best bike, the best drugs, or doesn’t have its shoes on? There has to be consistency. Every horse should actually have the same bike and be wearing shoes, and the drivers should be sitting up in the bike, not lying down with a clear view of the Milky Way. In the Meadowlands Pace, watch the replay, Dexter Dunn, the sport’s top driver, was leaning way back in the bike driving Rockyroad Hanover. When the horse he was following broke stride, he ran right into the horse. Was his reaction time slowed because he was leaning back so far? Just asking, because there have been an alarming amount of accidents at different harness tracks already this year.

Do we have to keep making a mockery of the sport? Are we intentionally trying to kill it? Do the bettors matter at all? Should we keep them in the dark? Is that good business?