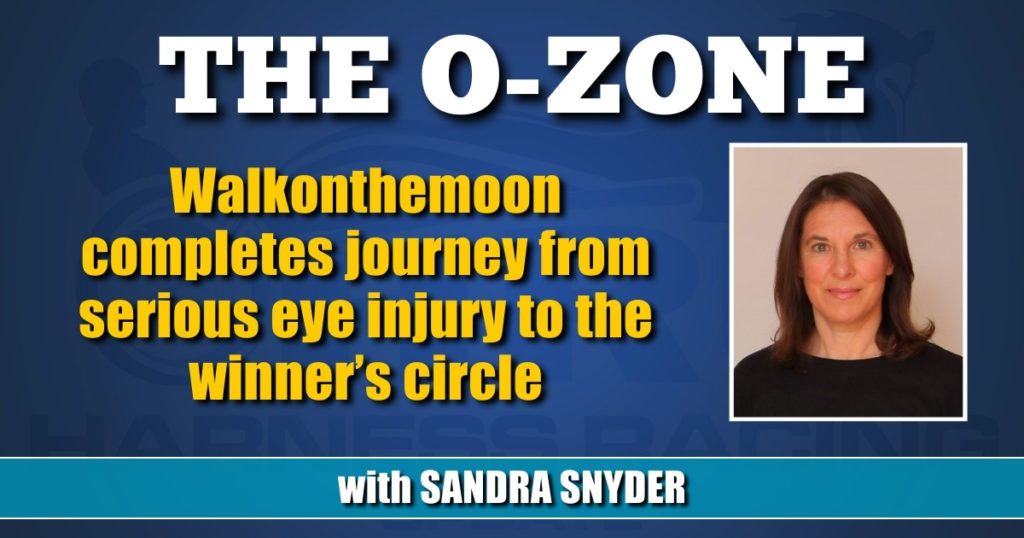 TheStable.ca’s sophomore trotting colt will next compete in the Ontario Sires Stakes Grassroots event on Tuesday at Woodbine Mohawk Park.

When 3-year-old trotting colt Walkonthemoon got his first career win on June 12 at Kawartha Downs there were owners from Saskatoon to Australia celebrating more than might have seemed warranted for a 1:58.3 effort in a maiden. The celebrations were extra joyful because when Walkonthemoon’s freshman season ended on Sept. 3, 2020, it was unclear whether he would ever race again.

By September of last year, the Archangel son had amassed a record of one second and one third in six starts, banking $32,716 for the members of his TheStable.ca fractional ownership group. He had been racing against the top horses in Ontario in the Gold Series and on Aug. 27 finished fourth in his Champlain Stakes division. The next morning his caretakers noticed his right eye was a bit swollen and irritated. Dr. Chris Grossenbacher was summoned and eye drops were prescribed to treat the inflammation.

With eliminations for the William Wellwood Memorial Trot six days away trainer Mario Baillargeon and TheStable principal Amy MacDonald kept a careful watch on the eye while prepping the colt for the richest stake on his schedule, and all seemed well when he stepped in behind the gate on Sept. 3. The next morning the eye was significantly worse however, and Dr. Grossenbacher quickly referred the colt to the University of Guelph’s Dr. Daniel Kenney.

“It was basically just one of those, you know you get something in your eye or you get allergies or whatever, it just appeared to be an irritation and it snowballed into a very big, serious problem,” said Amy MacDonald. “We weren’t sure if he might have to have it removed. It was pretty dicey there for a little bit.

“They race in the mud all the time and it was just one of those things where you just kind of said, ‘Oh, he’s got an irritation,’ and then wow it was not. It was not. And the eye is so delicate, too. That was what Chris (Grossenbacher) said, he’s like, ‘I’m not messing around with this, he’s got to go.’”

Walkonthemoon would spend almost two weeks in residence at the University of Guelph where clinicians determined that an ulcer, likely caused by a rock hitting the eye during training or racing, had become infected and part of the eye’s lens had suffered damage. After an aggressive course of treatment on site, he was fitted with a unique medication delivery system and returned to TheStable’s training facility outside Campbellville, ON.

For the next six weeks MacDonald and caretaker Nelly Boileau administered the colt’s medication every six hours, with MacDonald handling the daytime doses and Boileau the evening and early morning. Through a port attached halfway down Walkonthemoon’s neck, they would insert a syringe full of medication. The medication would then travel through a small tube that ran along the crest of the colt’s neck and between his ears, terminating under a small incision in his eye lid that allowed the medication to wash directly over the eye. To help keep the eye clean, Walkonthemoon sported a pair of protective goggles under his halter. (To see video of the treatment system click here).

“It was pretty incredible,” said MacDonald of the medication delivery system. “That actual tube did cause us a lot of grief though, when the horse rolled or whatever in the stall. Dr. Chris Grossenbacher, he was great, he always came and helped us fix it if it needed to be fixed or that kind of thing.

“And I had a couple heart attacks where I’d come in and he’d be looking at me and the goggles would be sideways and I’d be like, ‘Oh my gosh,’ but for the most part you couldn’t have asked for a better patient, he took it really well.”

In addition to the eye treatment, which initially involved three different medications and evolved as the eye responded, Walkonthemoon was also receiving daily intravenous injections of anti-inflammatory medication, but MacDonald said the youngster even handled that with aplomb.

“And he was only 2, like it was crazy just the way that he handled that whole thing,” said MacDonald. “And we had to put air through the line first, which anyone who gets air blown on their eyeball, like that’s not a cool feeling. And then we had to wait five minutes between each dosing of the medication, so we started bringing in lots of snacks for him.”

Once the six weeks were up and tube system was removed Walkonthemoon continued to need topical medication, but he was able to relocate to a turn-out facility where he could spend time outside in the paddock. The goggles remained an accessory for several more weeks.

Walkonthemoon remained at the turn-out facility until December, when he returned to TheStable training centre ready to prepare for his sophomore campaign. The eye was fully healed and MacDonald said you would never know how close the colt came to having it removed.

“If you were to maybe put a really strong flashlight on his eyeball you would be able to see a little pinprick of a scar is basically the way they described it,” said MacDonald. “They said that will be there forever, but as far as him being able to see, he’s able to see completely fine. He might have a little bit, just from that one spot, that might be blurry, but as far as the rest of his eye goes it’s perfectly good.”

Since that first victory on June 12, Walkonthemoon has recorded two more wins, one in a June 20 overnight at Georgian Downs and the second a 1:55 personal best in the July 11 Ontario Sires Stakes Grassroots event at Rideau Carleton Raceway. Through six sophomore starts he boasts a record of three wins and one second for earnings of $24,900 and currently sits third in the Grassroots point standings.

MacDonald said the support of Walkonthemoon’s owners lightened the load she, Boileau and caretaker Davey Boughton felt during the toughest weeks of the colt’s treatment and she is delighted that the youngster has returned to the competitive form he demonstrated at two.

Walkonthemoon will make his next start in the third Grassroots Leg on Tuesday, Aug. 10 at Woodbine Mohawk Park, where his owners will once again be cheering home their mild-mannered fighter.