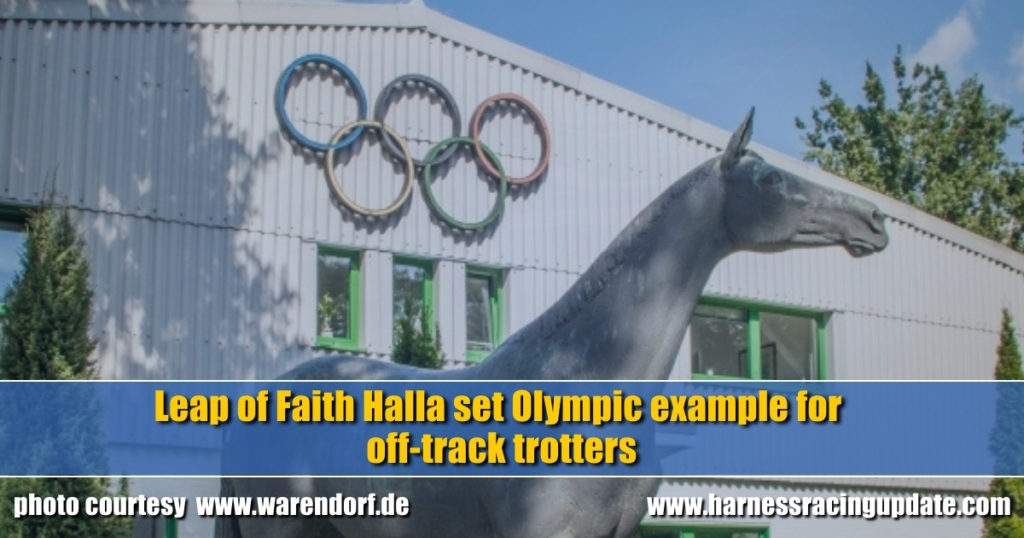 With increased attention being paid to the off-track lives of retired standardbreds, a piece of Olympic history could serve as a take-off point — literally.

Only one Olympic showjumping horse has earned three gold medals. That is Halla, a half-standardbred, half-French trotting mare of undocumented maternal ancestry. The pedigree of her dam, Hélène, is lost: She was a stolen World War II “booty horse” ridden by a German officer. The mare was later left with a farmer, Gustav Vierling. He considered Hélène unsuited to agricultural work, so she was bred to a standardbred stallion, Oberst. The resulting foal was born in May 1945 and named Halla.

Because there is no reliable documentation of Hélène’s background in France, it’s unclear if she raced or had racing bloodlines maternally. As documented by Elizabeth Letts in her book The Perfect Horse: The Daring Rescue of Horses Kidnapped During World War II, thousands of French racehorses were among those stolen by the Nazis.

Hélène’s paternal great-grandsire, Bordeaux, is variously considered a French trotter or Selle Français. (The French trotter was not an official breed until 1922; its stud book first closed in 1937). He had American trotting bloodlines on the side of his dam, Finette. She was sired by Shamrock, a U.S.-bred trotting stallion by Shepherd F Knapff out of White Stockings. These were not standardbred trotters: Shepherd F Knapff, named for his owner, was foaled in 1853 and exported to England. (Hambletonian 10, foundation sire of the standardbred, was only foaled in 1849).

Halla’s sire was definitely an inbred standardbred. Oberst’s sire and dam, Palmetto Watts and Odelis, were both out of the same mare, Ottaray Belle. Odelis was by Morgenwind, the 1914 German Trotting Derby champion. Palmetto Watts was a son of 1907 Review Futurity and Kentucky Futurity winner General Watts (2:06 3/4m), who revolutionized trotting speed as a 3-year-old. When he took his mark, it was a full two seconds faster than the previous world record for 3-year-old trotters, which had stood for 14 years.

Accounts of Halla’s career suggest that she was tried as a racehorse.

“The temperamental little horse began her career on the trotting track at Frankfurt-Niederrad, where she performed creditably. But it soon became clear that the mare, despite her speed, could not keep up with thoroughbreds,” reads a 2016 German article by Volker Kluge. Halla did compete in steeplechasing, placed 5 times (one win) in 15 lifetime starts.

Gustav Vierling offered the mare for use by Germany in the 1952 Helsinki Olympics. She was returned to him because of her unruly behaviour at both dressage and showjumping. Hans Günter Winkler, a groom/jockey at the dual-breed Frankfurt-Niederrad racetrack, worked with the mare in 1950. Because other riders found Halla difficult to handle, Vierling ultimately gave her to Winkler. At the time, he was considered a professional rider, however, and not allowed to participate in the Olympics. In 1953, Halla and Winkler won their first international jumping competition together.

The International Olympic Committee (IOC) conducted 1956 equestrian events in Stockholm, Sweden, separate from the rest of the games. Halla and Winkler represented Germany in individual and team showjumping. Winkler was injured as Halla cleared the second-last fence in the first round of competition, a 1.6-meter-high wall.

“In order not to be thrown out of the saddle, I pressed my knees together as quick as lightning, and at that moment I felt a stabbing pain in the lumbar region, as if someone had stabbed a dagger into my body,” he told an interviewer. Despite having the top score (4 faults), it looked as though he and Halla would be scratched from the next round.

A heavily-medicated Winkler was lifted into the saddle when judges would not reschedule him to compete later in the deciding round. Incredibly, with bare minimum guidance from her human passenger, Halla took herself through the Olympic course flawlessly. Her clear round in record time (97.4 seconds) earned team and individual gold. They would repeat with a team gold at the 1960 Rome Olympics. Halla was retired that year, produced eight foals, and lived until age 34. Her larger-than-life statue stands outside the German Olympic Committee for Horse Riding’s headquarters in Warendorf today and a video tribute to her career can be viewed here.

“Standardbreds are extremely versatile and incredibly athletic. They can adapt to any discipline and excel at it. I’ve been thrilled to watch many standardbreds that I’ve seen people pass over time and again, because of blemishes or breed stereotype, go on to be successful showjumpers. Standardbreds simply need a person in their corner who has the patience and consistency to want to bring their horse to the level of competition they want to be at.”

It might take a leap of faith, but Hale knows the breed and sees the potential for unsuccessful or retired harness racehorses in this second career. “After being around the racehorse side of things for much of my life, I got the opportunity to volunteer with a program that found retirement homes for standardbreds and I was hooked on watching these horses excel at more than just racing,” she said. She founded New Start with a crew of volunteers in 2020, after years of volunteering at similar programs herself.

Hale added that she would like to hear more about how harness racehorses excel in other fields, as it creates constructive conversation.

“Aftercare is becoming such a huge part of the racing industry because more and more people are demanding aftercare be at the forefront for these horses that have worked so hard for all of us. Opportunities to boast about these amazing horses who have gone on to have successful post-race careers is something that there needs to be more of.”