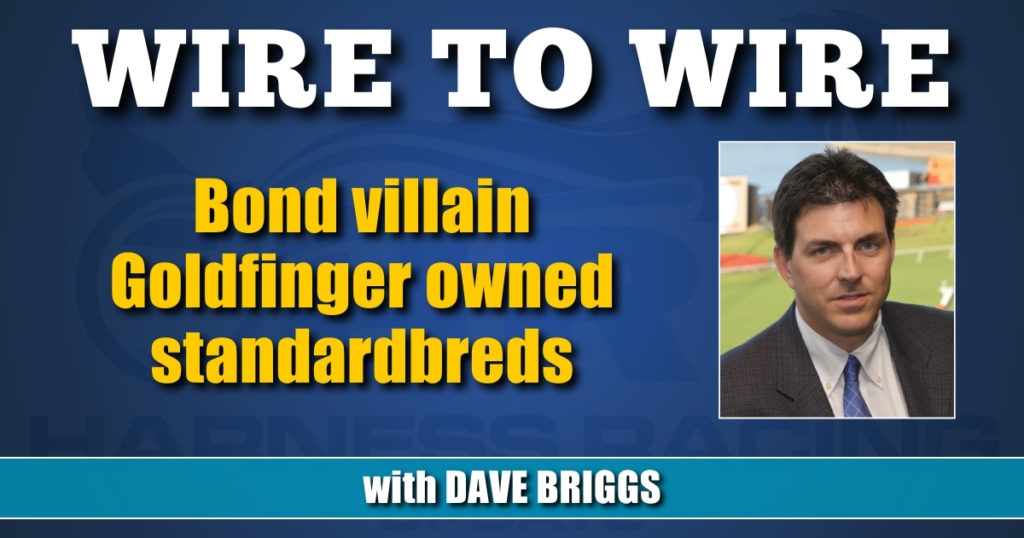 Did you know notorious James Bond villain Auric Goldfinger had a standardbred breeding and training farm?

I found this out watching Goldfinger for the first time the other night with my daughter, Erin (See photo evidence)

The sweet ride bowler-wielding henchman Oddjob gets to pilot to take Bond to the farm is hardly an Aston Martin DB5, but I guess times are tough when the main premise of your dastardly plan is to move gold around to different countries to cash in on better exchange rates. Mwah-ha-ha!

**Editorial aside: I know the move is from 1964, but for all you “Connery was the best Bond” people, it doesn’t hold up and this is supposedly one of the best Connery Bond flicks. Fight me.

Anyway, Auric Stud Farm, Inc. — which the narcissistic Goldfinger named after himself, of course — is supposedly located in Kentucky. In a bit of movie “magic” the “standardbred” farm — not sure those are standardbreds — was created on the back lot of Pinewood Studios near London, England.

It should be noted that Auric Stud is the base from which our villain plans his audacious theft of the gold bullion reserves located at nearby Fort Knox. The farm also features a dungeon located beneath the stables where Bond is briefly imprisoned and a rumpus room that turns into a massive gas chamber.

To be honest, if it wasn’t for that gas chamber thing and killing Bond Girl Jill Masterston (Shirley Eaton) by painting her gold, I think it would be cool to name a horse after Goldfinger or get some Auric Stud Inc. t-shirts made up and sell them in Lexington to people that get the reference to the movie… Though, on sober second thought, this may be about as brilliant an idea as trying to move gold around to different countries for a better return.

Apparently, Goldfinger was as keen on tech gadgets as Q. Earlier in the movie, the former displays a giddiness for lasers which proves he was ahead of his time — and, remember, we’re talking about an era when Bond was sashaying around Miami in a terrycloth onesie that was available for purchase just a few years ago from British company Orlebar Brown for a mere $545. In one of the original, “why didn’t he just shoot Bond in the face and be done with it?” moments, Goldie straps 007 to a table and slowly sends his laser toward Connery’s knackers. You can cut the tension with a… never mind… We all know how much Bond cherishes those billiards, right Pussy Galore?

While the array of creatively-named characters makes the movie both cringe-worthy and memorable, all of this seems like a giant distraction to me.

What I want to know is: Are the standardbreds just a front for Goldfinger’s villainy or an indication that he was misunderstood and really had a heart of gold?